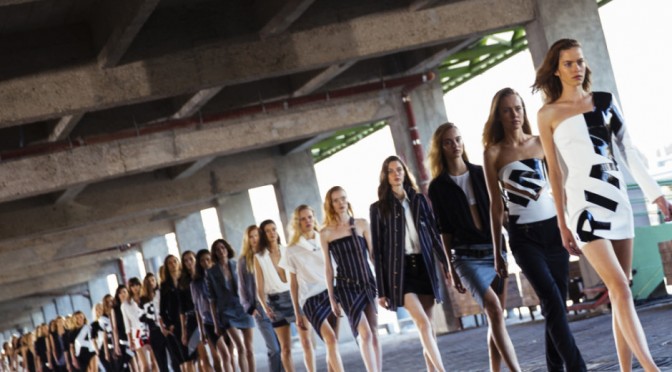 ANTHONY VACCARELLO SPRING 2015 RTW: PARIS – He is definitely bringing SEXY BACK.  French designers have always known SEX SELLS, thanks God for that and those “SEXY I WANT SEX CLOTHES”

Vaccarello has always opened Paris Fashion Week with his version of French Femme Fatale looks.  For Spring/Summer 2015 the designer has double his efforts: VERSUS VERSACE in New York Fashion Week collaboration and now in Paris we have seen his version of a “SEXY NAUTICAL CHIC WOMAN”

Deliberately foregoing print this season, Anthony Vaccarello explored stripes instead, sending them skirting their way around thighs in a pointy denim mini or floating across the bust in one of his sheer, silk riffs on the Breton top. They also defined one of the designer’s most deconstructed (dare we say Belgian?) propositions to date: a series of angular, crèpe evening dresses that appeared to be steamrolled with blown-up patent-leather letters in monochromes and a splash of lipstick red. Backstage, Colette’s Sarah Andelman revealed she’d be showing the sweater version in her daily revolving Fashion Week window as of tomorrow. With her eagle-eye ability to zone in on one look per day, we’re betting that window is one to watch—like Vaccarello—come hell or high water.  Source: vogue.com

There were two notable themes in Vaccarello’s mind: The URBAN WORKING and the EASY I DON’T MIND SEXY GIRL.  The textiles, the cuts, the geometric sense, the lines are amazing…..by the way, LOVE THE SHOES!