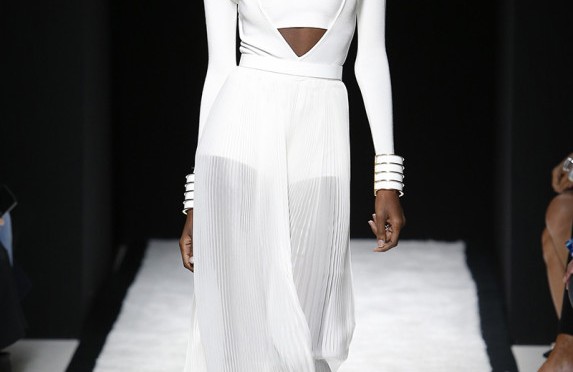 PARIS – Balmain S/S 2015, SEXY, TRANSPARENCY, COLOR & FIERCENESS. Definitely that could be the resumen of this runway.  This is, for real, a silhouette for a killer woman!

There were strong opinions about the runway.  The fashion house obviously have their costumers, mostly celebrities.  Is not a house who innovates or change the face of fashion, not always you favorite but everyone use it.

Balmain tone down a little this season and focus more on his French heritage and content quality.

“I’m keeping going with the girl I know. I’m listening and asking myself, What is sexy now? There is nothing wrong with pop,” he said backstage.” Fashion–forget it. We shouldn’t be speaking to the elite! We should be speaking to these girls who exist all over the world.”

In a nutshell, Rousteing feels empowered by his connection with his generation, which is made up of many ethnicities, and he no longer feels held back by the weight of Parisian tradition. Was it a coincidence that Michael Jackson’s line from the “Scream” video, “Just stop questioning me,” kept sounding out?

What is sexy, according to Rousteing? Not so much of the short body-con, this time (although he hedged his bets with several examples). The newer feel is more fluid, involving sheer plissé pants and lots of flared versions in jersey (a rising trend). Cutaway jumpsuits, banded stretch tops, plunging chiffon tunics: everything Rousteing does is a total look, top-to-toe. That makes it a complete commitment—not one of those collections you can casually pull apart, wear bit by bit, and merge invisibly into a general wardrobe. But then again, these clothes are about the opposite of merging and invisibility. We know where they’re going, what and who they’re for. And in a twinkling of an eye, she is sure to be out and about wearing them.  Source: vogue.com