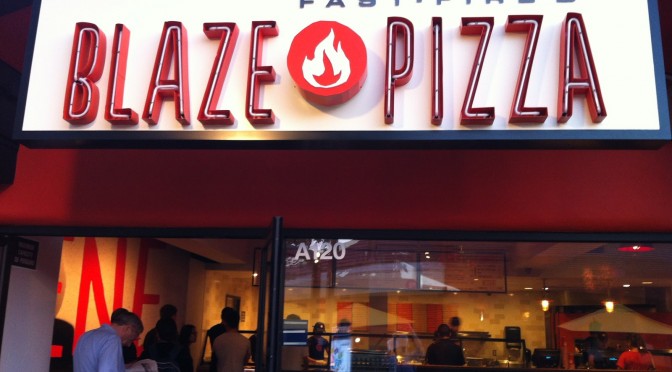 NEW ORLEANS, LA – There’s nothing better than Artisanal Pizza, even better when you are the ingredient maker.   Blaze Fast-Fire’d Pizza (Blaze), the nation’s leading build-your-own pizza chain, announced today that it will soon be opening its first New Orleans location this January in The Paramount at South Market District (611 O’Keefe Avenue). Blaze features an interactive assembly-line format that allows guests to customize one of the menu’s signature pizzas or create their own, choosing from a wide selection of fresh, artisanal ingredients – all for under $8.

“Our mission at Blaze is really simple – we’re all about bringing the community a place where guests can connect, create and enjoy great pizza at crazy fast speed,” says Jim Mizes, president & COO of Blaze Pizza. “If you think about it, there hasn’t been a good way to enjoy a made-from-scratch pizza without the wait. Now there is. We believe this will be a game-changer in New Orleans.”

“I am thrilled to have the opportunity to take the years I’ve spent developing my dough recipe and bring it to a new audience,” says Chef Kent. “We’re really looking forward to introducing the Blaze concept to New Orleans.”

“Blaze offers an incredible product in a fun and attractive atmosphere, and we’re excited to add them to the unique mix of restaurants in the South Market District,” says Matt Schwartz, Co-Founder of The Domain Companies, South Market’s developers. “We believe Blaze will quickly become a destination for lunch downtown, a pre or post-game tradition and a neighborhood standby that area residents will love to frequent time and again. Blaze’s enthusiasm for New Orleans-inspired design and commitment to source local products convinced us that they were the perfect addition to The Paramount.”

The first Blaze Pizza® restaurant opened on August 6, 2012 in Irvine, CA, and quickly gained attention for its chef-driven recipes and “build-your-own pizza” assembly-line format.  Described by Zagat as “One of 10 Innovative Restaurants in Los Angeles,” Blaze Pizza is developing a cult following as it expands across the U.S. The company currently operates restaurants in 11 states and the District of Columbia, including the major metropolitan areas of Los Angeles, New York, Chicago, San Francisco and Washington D.C.  Founded by Elise and Rick Wetzel (co-founder of Wetzel’s Pretzels), the concept is backed by investors including LeBron James, Maria Shriver, Boston Red Sox co-owner Tom Werner and movie producer John Davis.  For more information, please visitwww.blazepizza.com or www.facebook.com/blazepizza.