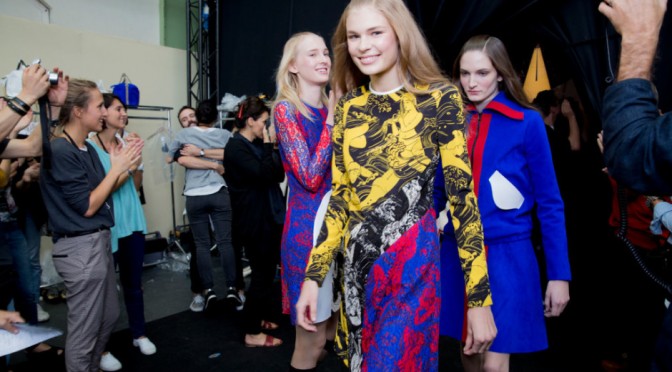 PARIS – Carven show at PFW seems like was built for speed. You might even say it was built from it.  As Guillaume Henry explained, his key reference was racing.  He also include some asiatic inspired fabrics and vibe to the line.

Taking in everything from Formula 1 team uniforms to the blurred stripe of a brightly colored car taking a curve at a couple hundred miles per hour. To which the reply had to be, “Sure, yeah, but maybe the 1960s were kind of a thing, too.  And what about Japan?” It wasn’t like Henry was trying to be sly—alongside all the racing motifs, the mod silhouettes and Edo-style illustration prints were front and center here. As were the big ol’ bags many of the models cuddled under their arms, a little distractingly, like helmets. The bags will sell, and so will the clothes—the spiffy bike shorts and zip-up tops, the PVC-python coats with daggered lapels, the kicky A-line minidresses. There may have been a straightforward commercial aspect here, but given that Henry has presided over such a rapid expansion of this only lately relaunched brand, perhaps it’s fair to recognize retail appeal as a key part of the Carven vocabulary—right in the mix with lace (printed here) and strong shapes for coats (to wit, those bladelike lapels).  Source: style.com

It was a different sort of ease than we’ve seen on the runways this season, and in a way, a more natural take: Clothes that are by definition easy, if not as traditionally relaxed in silhouette. Double-crepe trousers were fluid without drooping; flirty zip-front skirts stood at attention under appealing jackets and one-piece ensembles that zip up and go: What could be easier than that? And to that end, what could feel more right for spring?