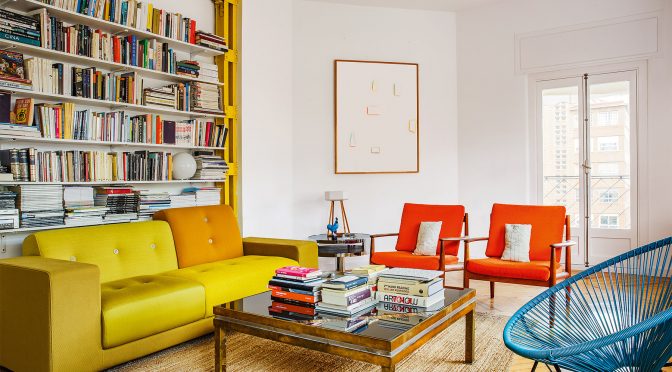 In this flat in Madrid, the architect Patxi Eguiluz made a clean slate but maintained original constructive details. The design alternates with family heirlooms and modernity with nostalgia. 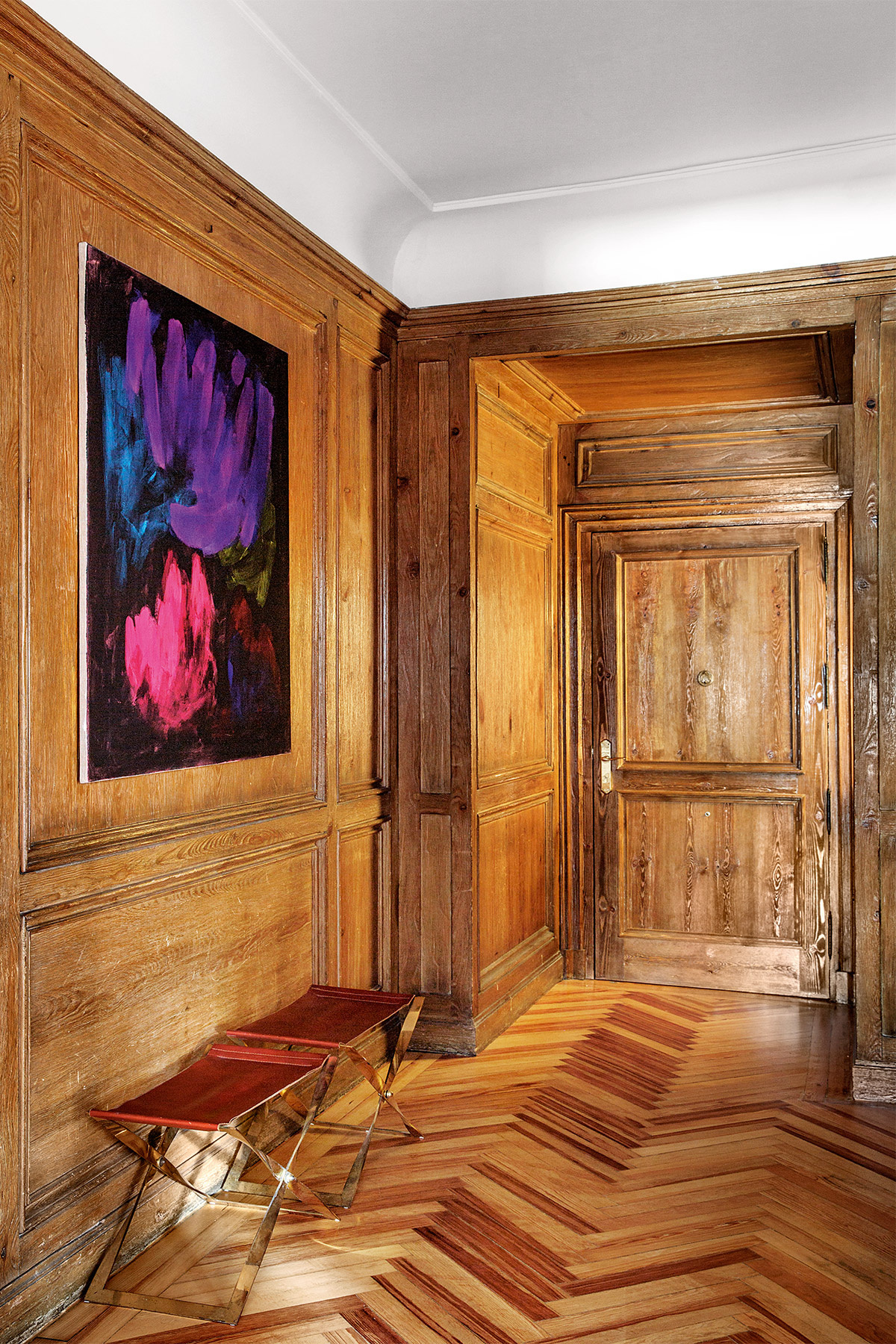 They saw it but that very black and now can not be more clear. When the owners visited this apartment for the first time, it had just been vacated after 40 years renting to the same person. “It was full of wood paneling and carpentry, very subdivided and it was tremendously dark and overcrowded,” says architect Patxi Eguiluz, a friend of the couple, who was consulted at the sight of him. Little by little, this was convincing them of the good possibilities that housed their 125 square meters located in a building of the 30’s of the Madrid neighborhood of Salamanca.

They asked for a closed kitchen but that it had relation with the living room and that eliminated to the maximum the corridors and the corners dead. He proposed to remove overdecorations and show the skeleton in sight, to clean up everything that had been overlapped hiding the structure and to bring to light the original materials, such as metal beams, which now indelibly mark the identity of the house. “They appeared during the play and, at the last moment, we decided to risk and paint them in yellow. If not, we could always repaint them, but we liked it, “the owners tell us. “Only the entrance and the office of the old distribution remained. The rest was subjected to a complete change. The present room was subdivided into three rooms, just like the kitchen, “explains the architect, who solved the problem that the latter was open but less with a black iron and glass enclosure. 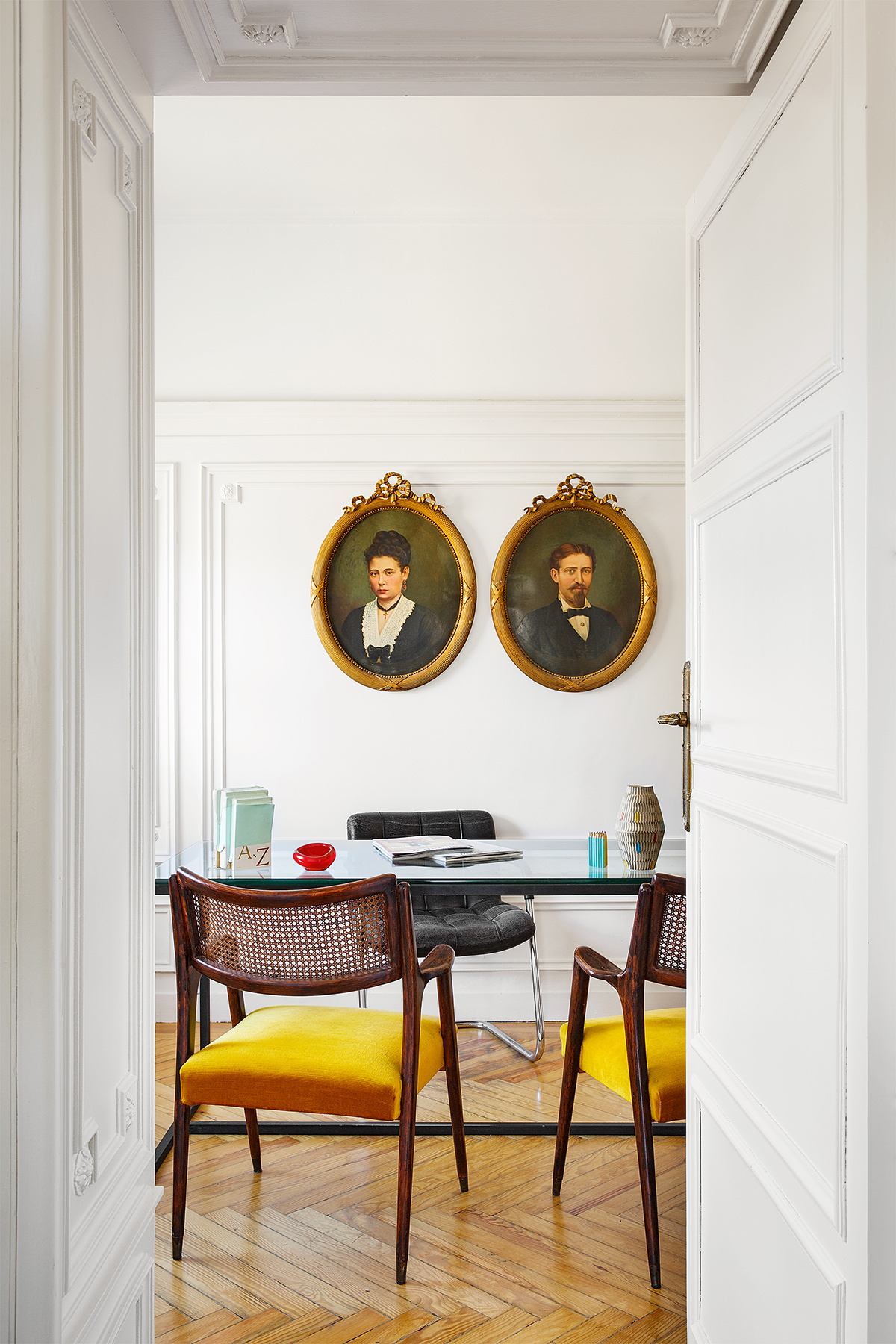 The parquets and the guillotine windows, or rather, their aesthetics, were maintained, since it was almost a philosophical obligation of the project to preserve the maximum number of preexisting elements. “We loved it but they were spoiled, so we asked La Carpintería to copy them but with double glazing,” recalls the couple. Once a luminous container was obtained, they threw themselves into the furniture that they carried with them from previous houses: chrome steel lamps and tables inherited from a modern grandmother, own designs (such as the living room bookstore or office table), vintage Of physical and virtual rakes and good pieces of contemporary art, since one of them works in this world. “Of authors and of galleries that are mainly friends, Spaniards and Latin Americans and with ages similar to ours”. On this floor everything is the sea of ​​course. 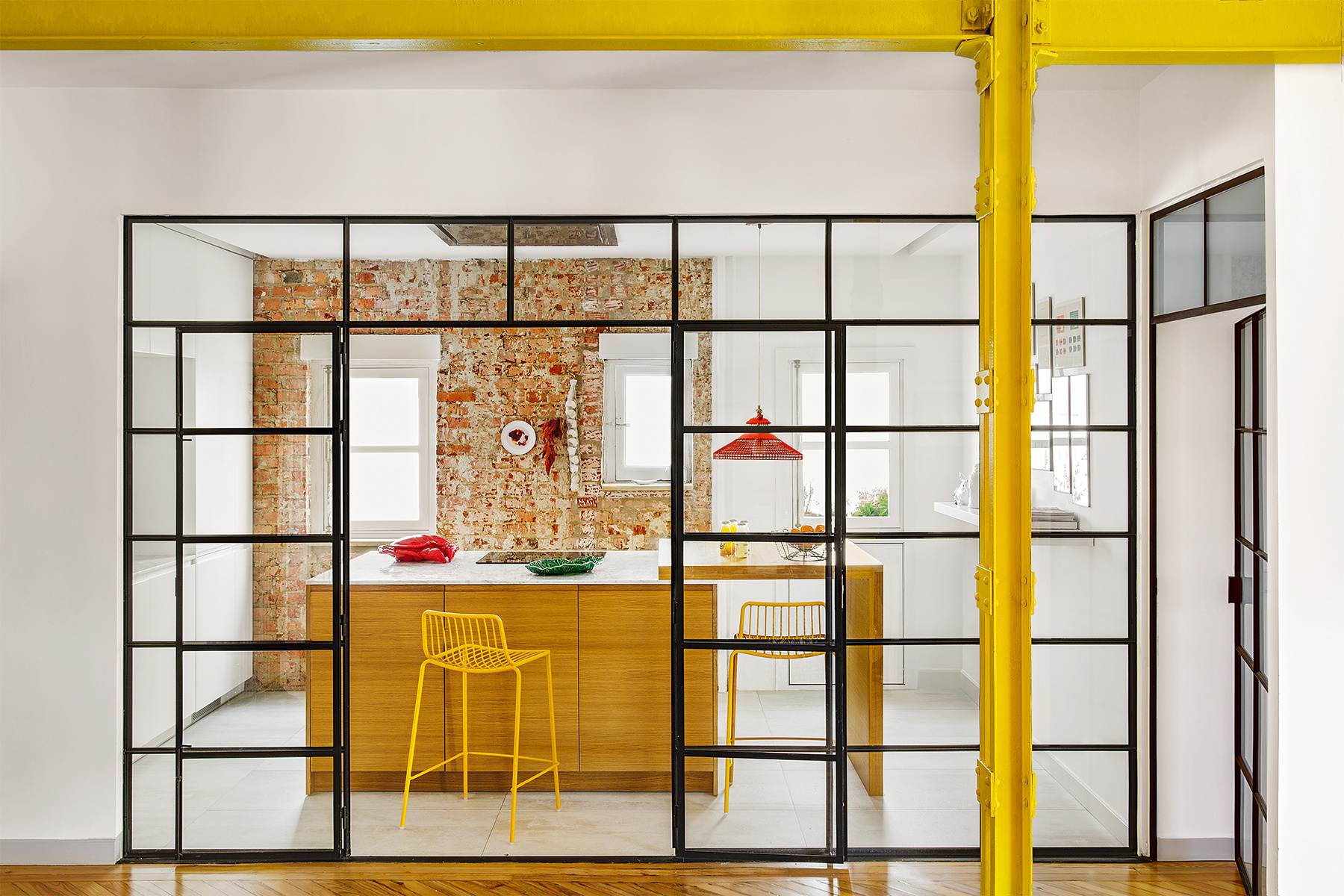 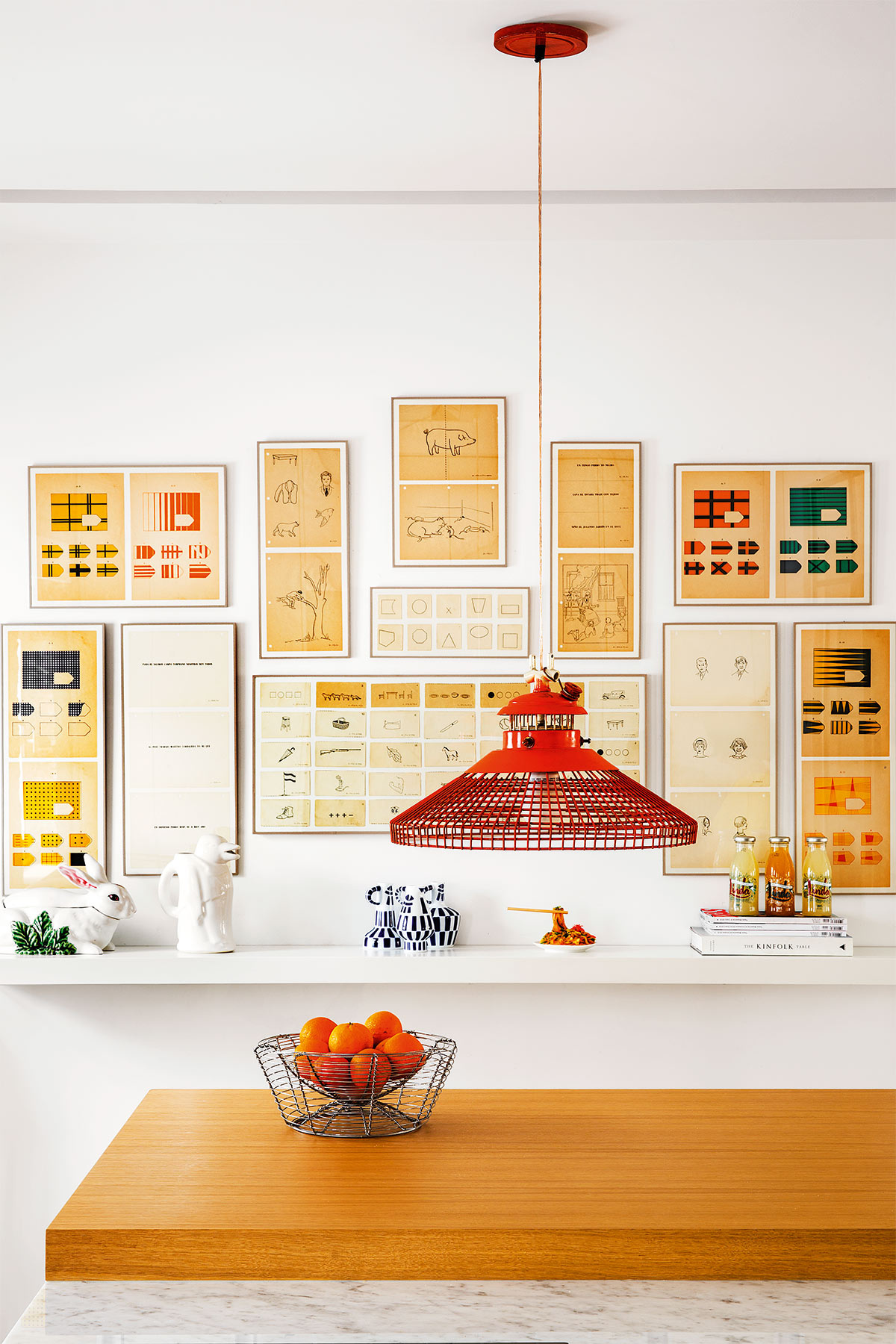 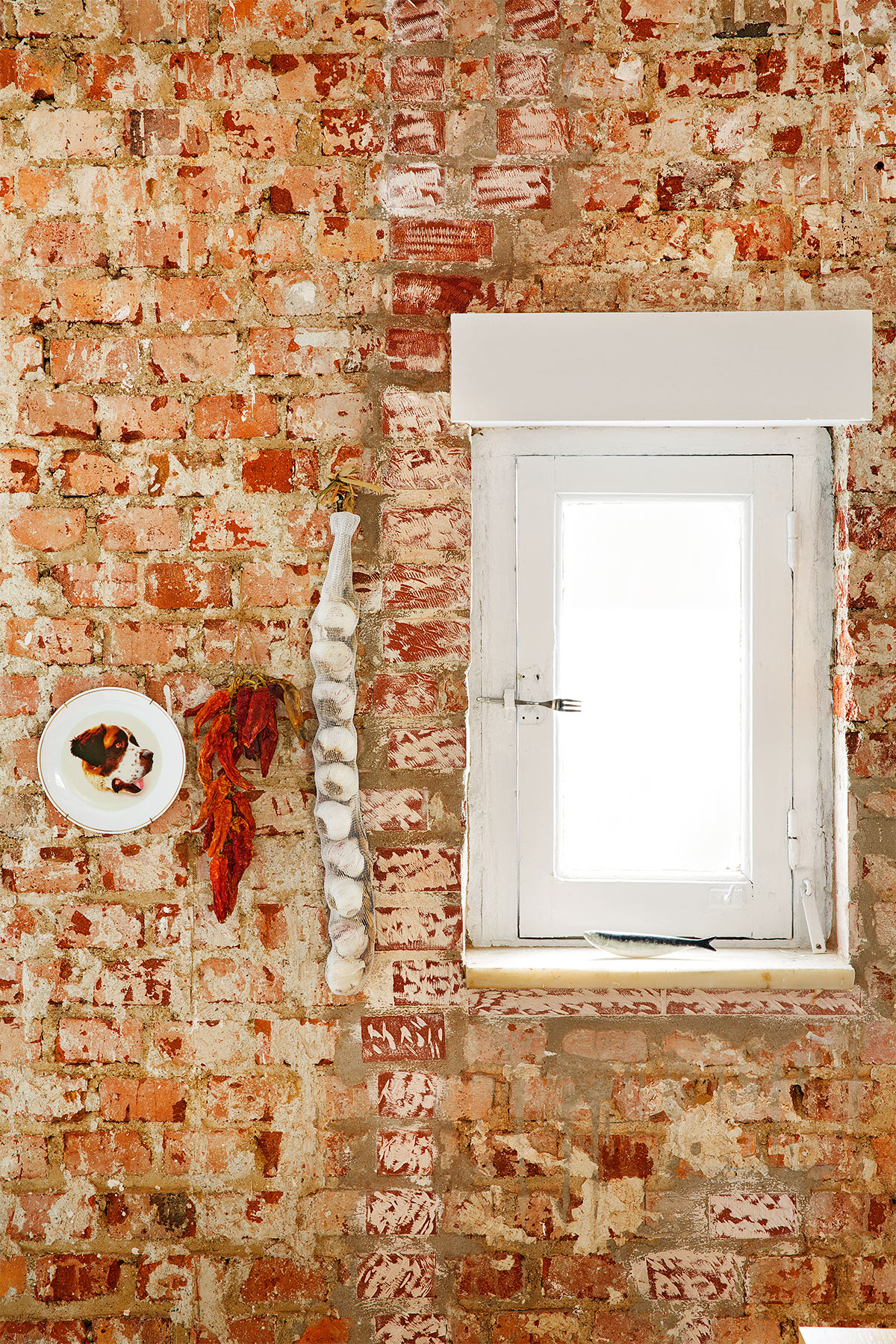 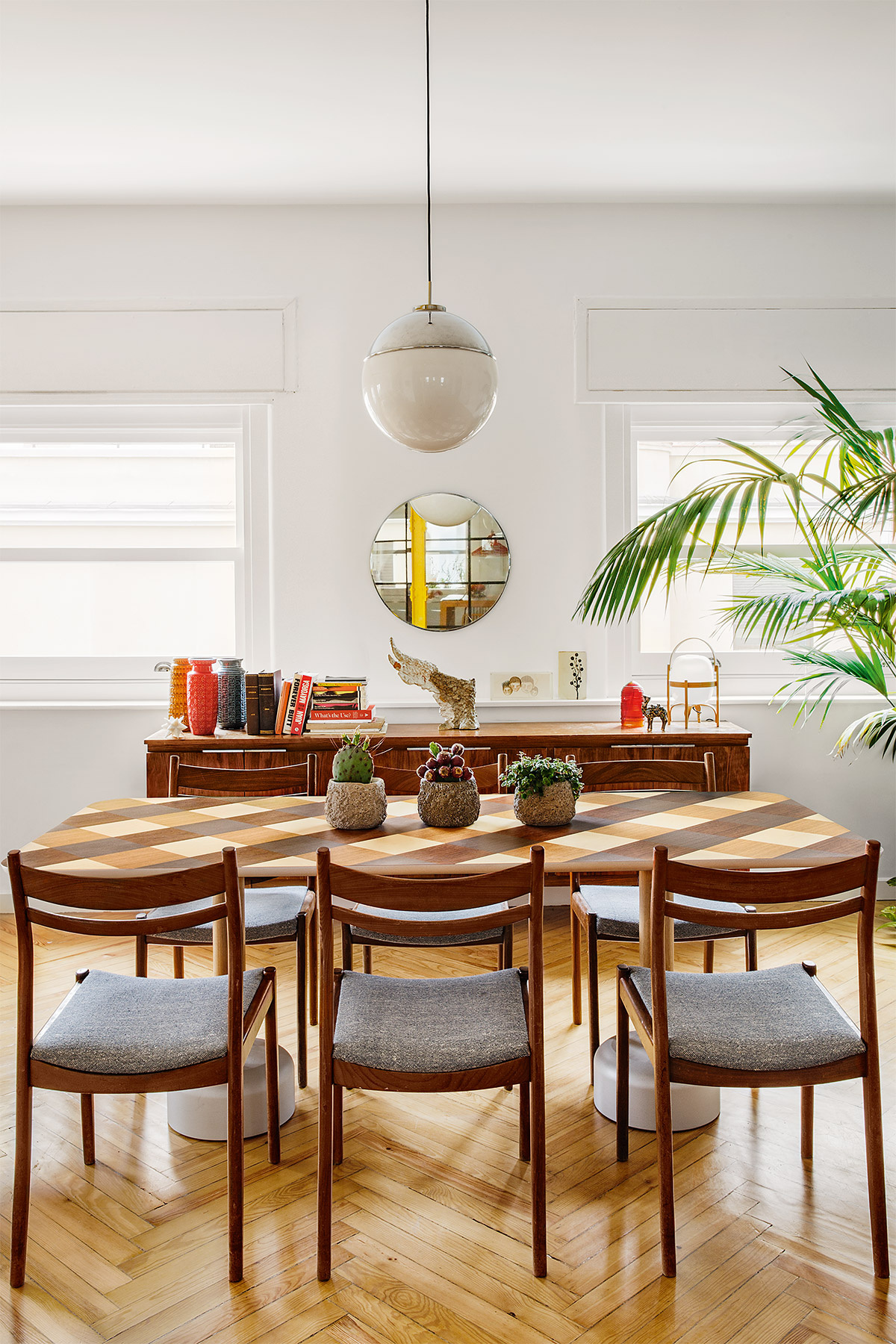 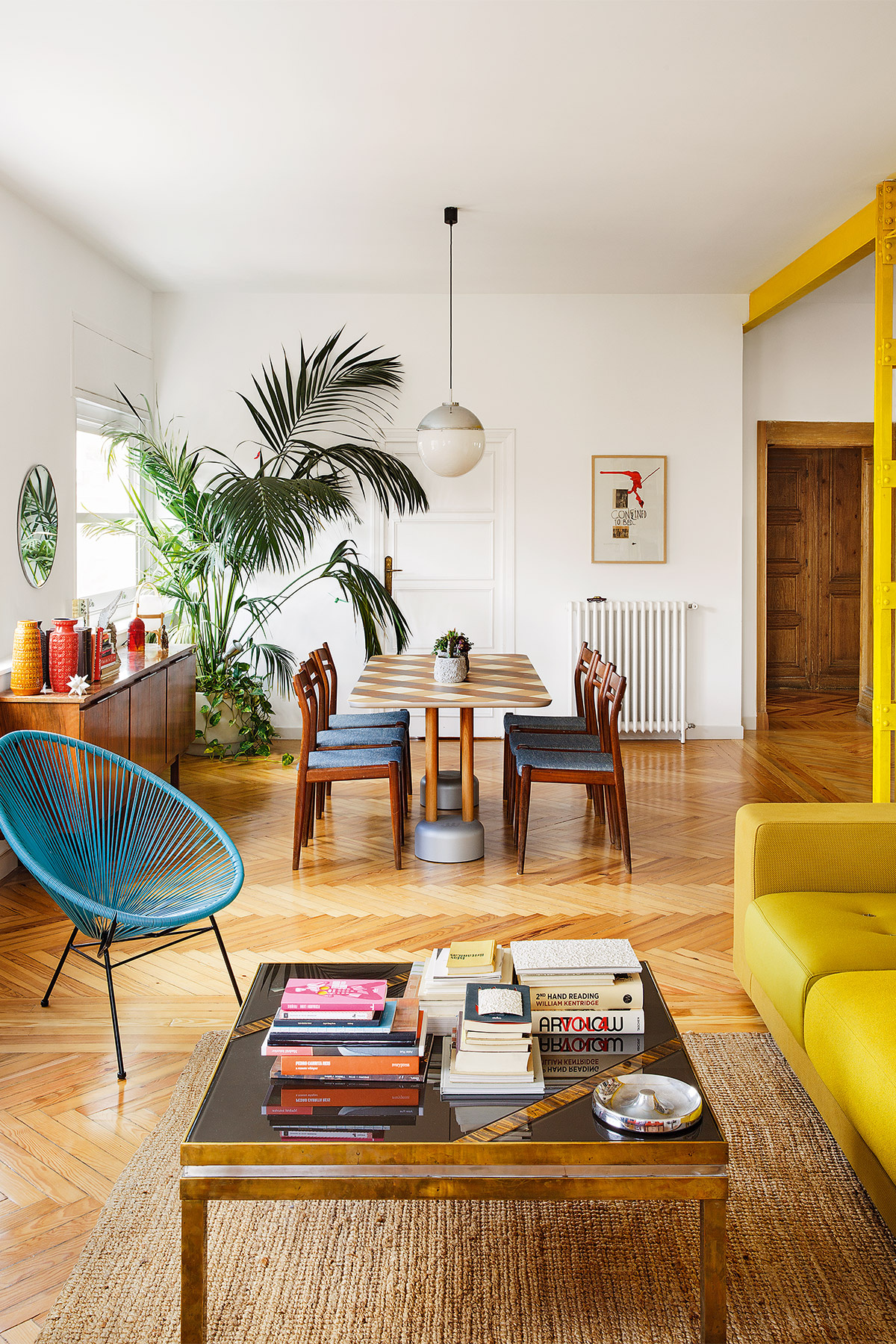 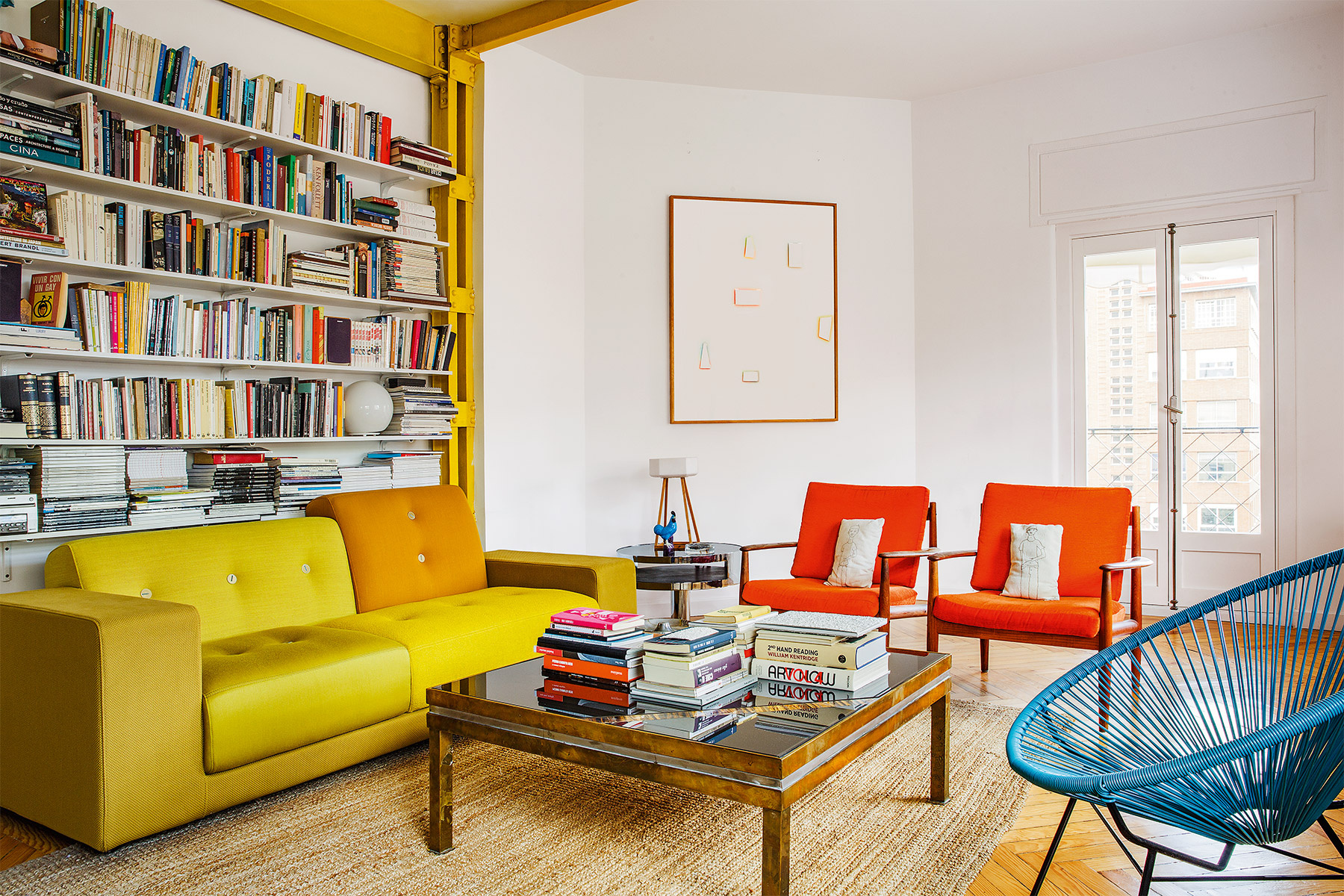 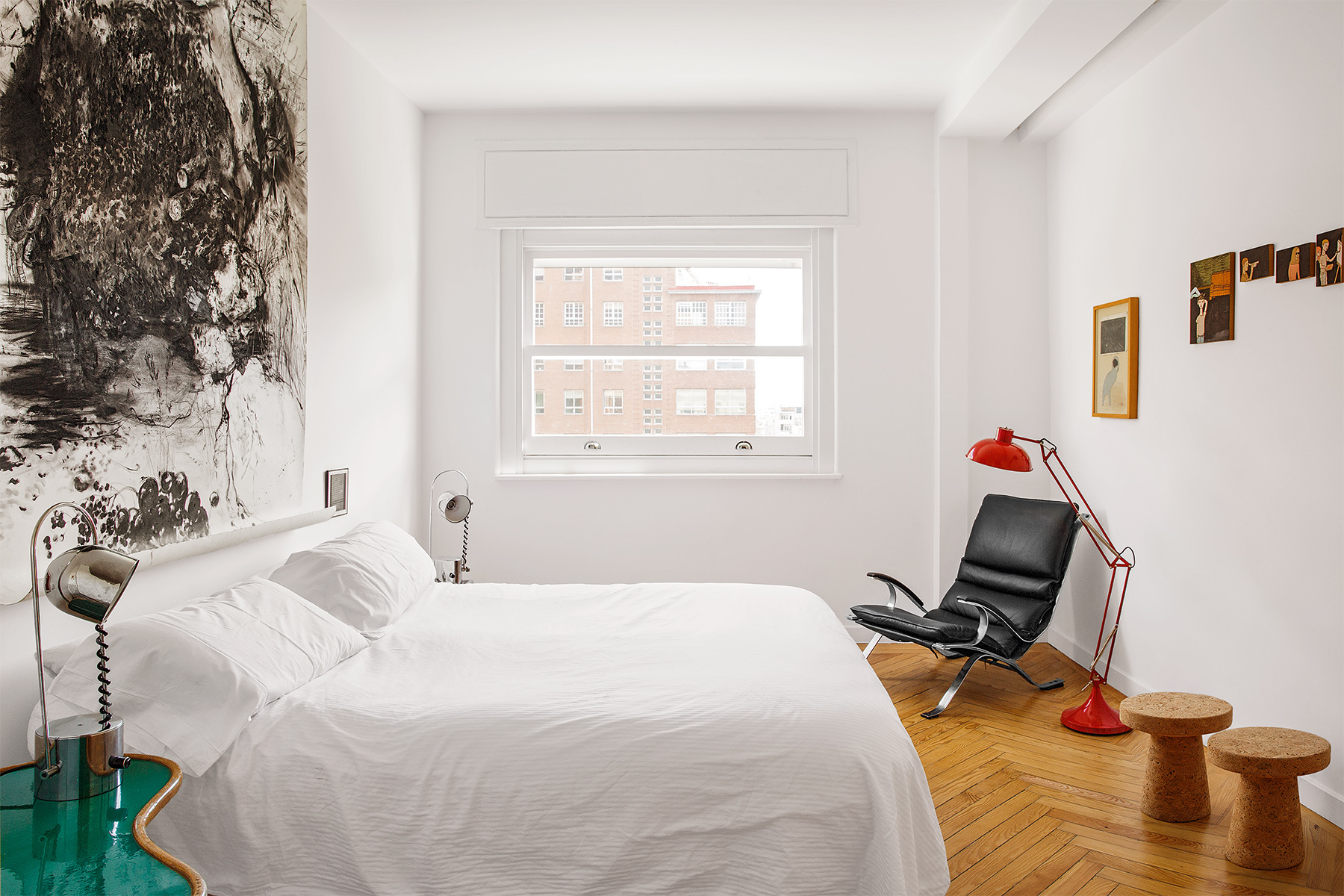 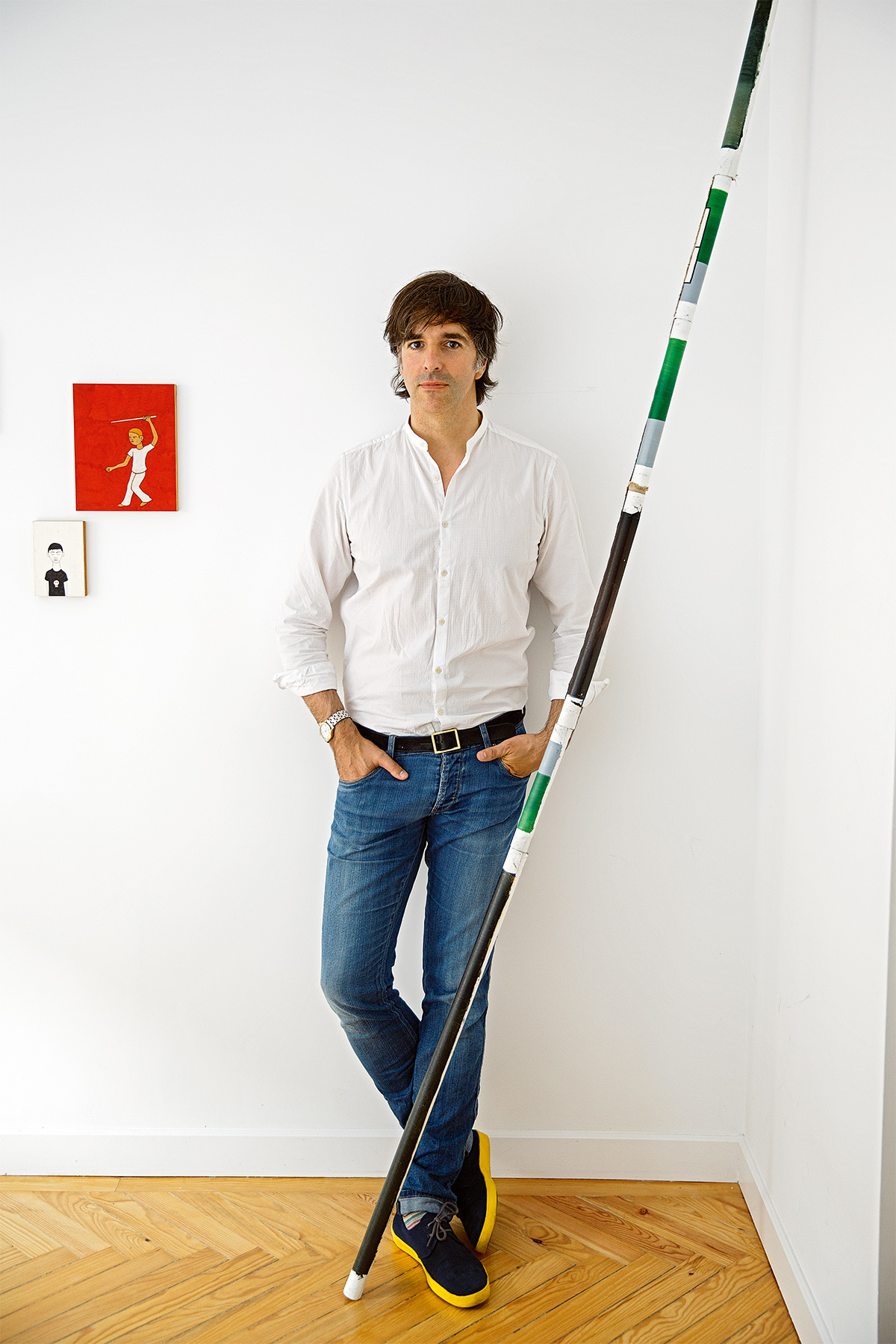 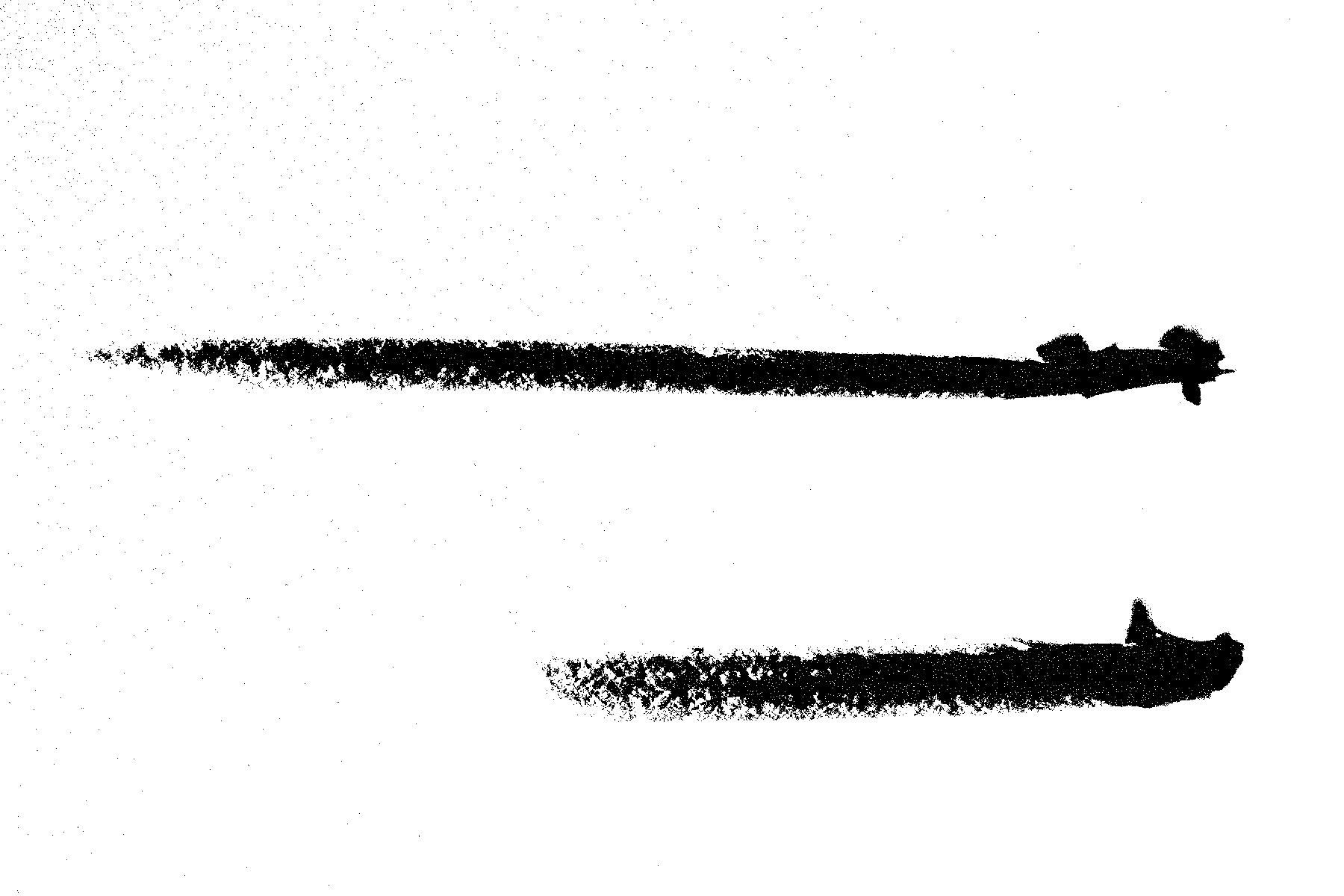