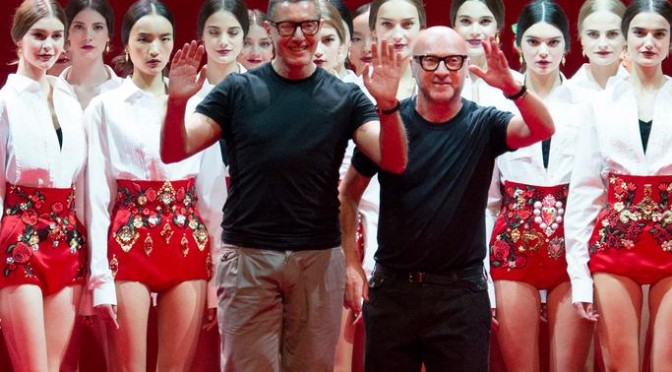 DOLCE & GABBANA WOMEN SPRING 2015 RTW – RUNWAY (MILAN): “The Spanish influence in Sicily Between 1516 and 1713.”  The idea of getting “dressed to kill” (or be killed) originated with bullfighters. Are you for one second surprised that for Dolce & Gabbana, Spain is the new Sicily? Those two points on the compass share a wealth of inspirations for Domenico and Stefano.

The Dolce & Gabbana Women Summer 2015 collection is inspired by the heritage of the Spanish culture on Sicily’s history.  The Sacred Heart is the main symbol of the collection and it is found embroidered or printed on most of the pieces.  The choice of the carnation was made not only because it is a flower that recalls the Spanish tradition, but also as an homage to Mr. Dolce’s mum, as it was her favorite flower.

Mr. Dolce and Mr. Gabbana’s challenge was to convey the Spanish influence in a non-conventional and literal way. They achieved this thru the use of very simple shapes matched with very rich details and embroideries. The result is a collection full of joy, love and sexiness.  Source: dolcegabbana.com

The show was huge, but inside, fighting to get out, was a straightforward story of leggy silhouettes, romantic full skirts, and ornate embellishment on simple shapes. The finale nailed that. The Dolce army marched in white bullfighter shirts and high-waisted, embroidered shorts in red duchesse. Olé!