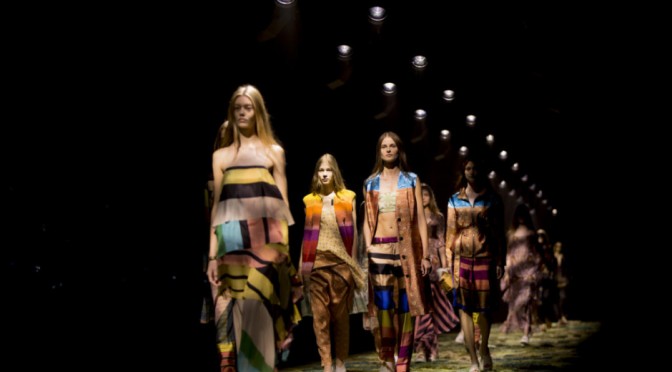 PARIS – This Dries Van Noten Spring/Summer 2015 collection was inspired by John Everett Millais’ Ophelia, the Pre-Raphaelite image that launched a million hippie fantasies.  In the painting, Ophelia floats dreamily in a magical woodland setting.  Dries Van Noten re-created the mood with dusky golden lighting and a mossy forest floor—actually a carpet specially created by the Argentinean artist Alexandra Kehayoglou. (It will be reused for special events around the world, Dries assured us.)

The Dries Van Noten spring 2015 invitation took the form of a little Perspex box containing a bright-green herbaceous cutting that looked like a cross between grass and lichen, a trace of the organic world nestling inside the confines of something industrially produced. So the inevitable question backstage in the moments before his show started was this: “Dries, do I plant it, cook with it, or smoke it?!” Van Noten laughed. “Those are three good options, so why not do all of them!” he said. “But in fact, the collection is actually inspired by the idea of A Midsummer Night’s Dream; about a girl who loves the full moon but also the sunlight.” To emphasize the kaleidoscopic, spaced-out vibe of the general proceedings, Van Noten and his team asked the Buenos Aires artist Alexandra Kehayoglou to weave a rug for the runway—which she did in the space of sixteen days—that looked like moss in many pastel shades of green, pink, and blue, and that gave a whole new meaning to tripping on the carpet. At the end of his show, the models sat down and lounged around, all very love in style, and I can’t say I blame them: After three weeks and counting of shows in four different cities, a rest for a minute or two would be positively idyllic about now.

Of course, in that quiet but utterly confident way of his, Dries Van Noten encapsulated the fashion moment, the mood, the feel, the attitude of next spring. Hard and industrial and technologically inclined seems plain wrong, and instead, a celebration of connecting with the natural world around us is, if you’ll excuse the correct period vernacular for a second, where it’s at. (Think of how many mossy banks have masqueraded as runways this season alone.) Nothing that strident or overt here in the message, of course, just a ton of gently suggested propositions of absolutely gorgeous things to wear. There were tiered dresses in tea-colored mosaic-pattern chiffon or bias and block-striped silk; fluid trousers with panels that swooped over the hips, the legs tapering to the ankles; jacquard coats layered over diaphanous dresses and narrow pants, in the fusion of the pajama and the track pant that Van Noten does so well; vests, short in patched brocade and adorned with zippers, or longer in shimmering combinations of yet more jacquard and Lurex; and filmy nothings of tunics, some glinting with metallic stripes. And of course, in the end, as with all Dries Van Noten’s shows, his way of putting it all together is just the beginning. How you will choose to wear it is entirely up to you.  Source: vogue.com