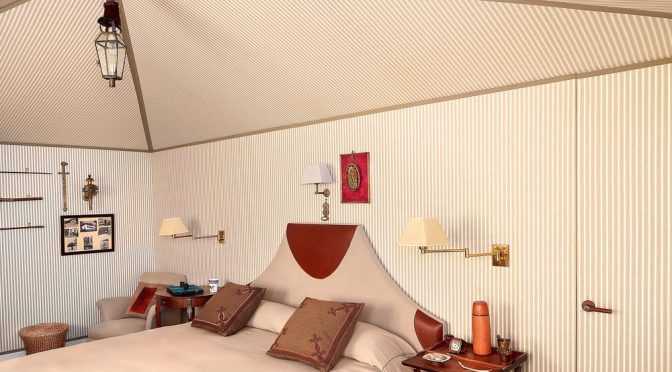 The geometries of Hicks and the symmetry of Bustamante. Military style and Grand Tour. Inherited pieces and own designs. With all this, Estanis Aguilar, a fan of the XVIII century, has built his house in Madrid. 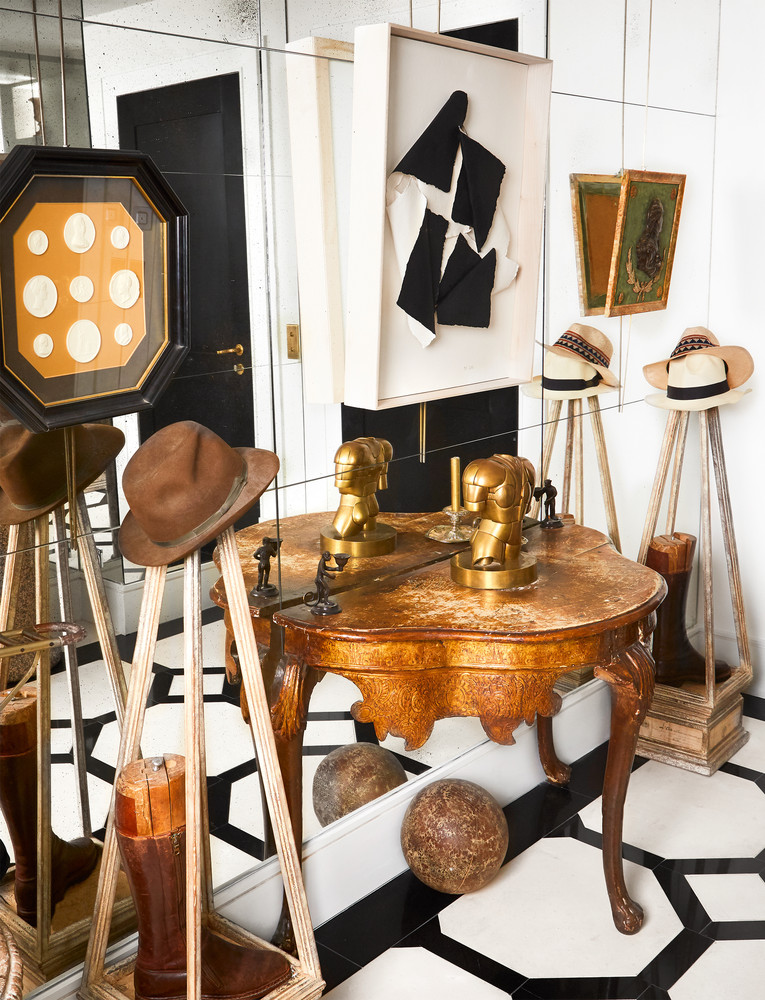 “It was a nuisance during the work, because he is very meticulous and he has everything very clear, but his sense of aesthetics is incredible -as his sister Magdalena describes to Estanis Aguilar-“, the interior designer and has helped him to reform this house in the neighborhood of Salamanca, Madrid, playing with the symmetry of abundant geometries. Estanislao was an antiquarian and then furniture designer, two aspects that he mixed with energy in his new apartment. “I am delighted and super fast here, I found the perfect size in the perfect area. I did not want a bourgeois and stale house, with Spanish virgins. It is a combination of inherited pieces, bought and created by me; a very personal decoration with the rest of my family, the passion of my grandmother, who spent every Sunday at El Rastro, “he starts.

In a building of 1927 by architect Manuel Lorente, 170 square meters are distributed in hall, dining room, kitchen, living room and a long corridor full of closets leading to his bedroom with dressing room and bathroom (in which he installed a huge bookstore in the area of the toilet), another guest and a toilet. “Here lived an old lady. They were all small rooms and there was only one service. We throw it whole, we just leave the contours, “she explains. For the floor they chose a marble with white and black tracery at the entrance, and an oak flooring in the rest. Neutral tones dominate except in the room, where the owner chose a lacquer of a blue color “like the sea when it is getting dark on a gray day,” he explains. His sister laughs: “The painters went crazy to hit it.” Estanis is a treasurer, a perfectionist of prodigious memory, an expert knowledgeable about the classic that a decorator has inside. He loves David Hicks and Luis Bustamante and his favorite time is the XVIII, although he also has pieces Felipe V, Maison Jansen or the Grand Tour, an Empire console, busts, mirrors, medallions, obelisks, chandeliers … to which he has Incorporated own designs, such as the dining table in black wood and brass, inspired by a compass, or the center of the room with granite balls that recovered from a demolition. 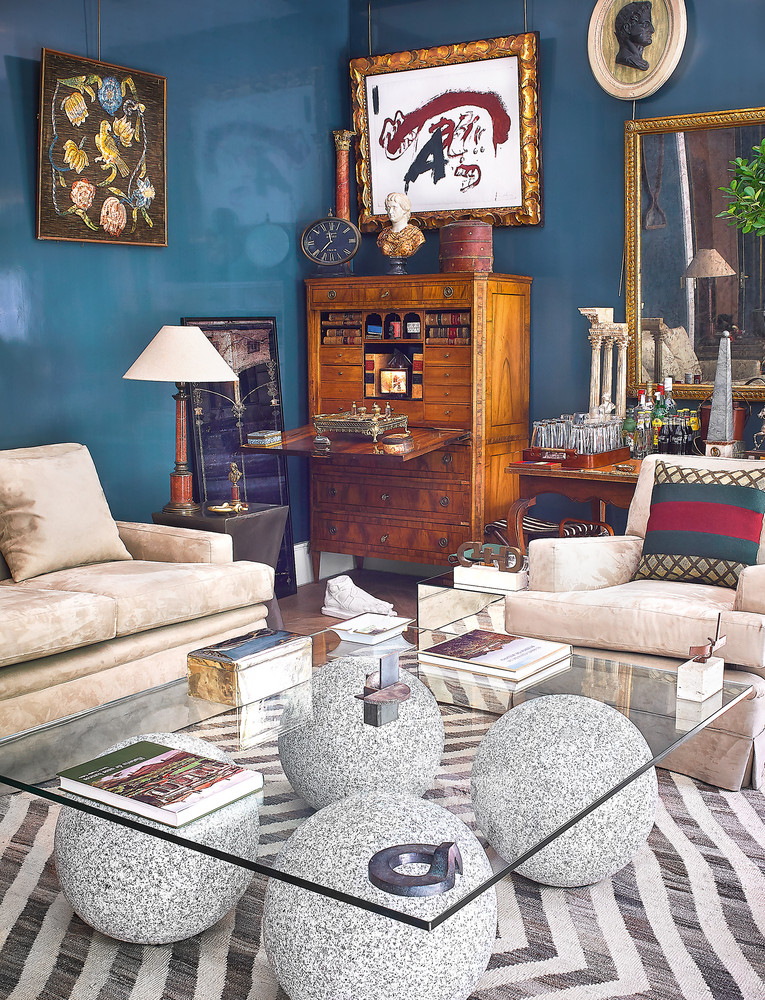 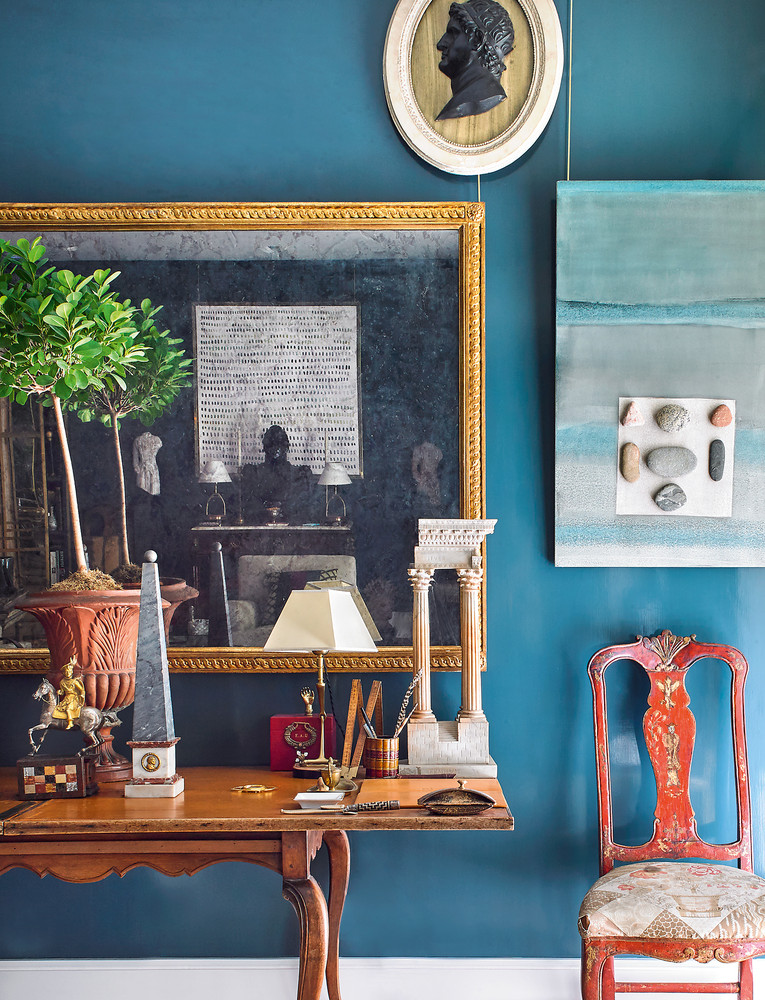 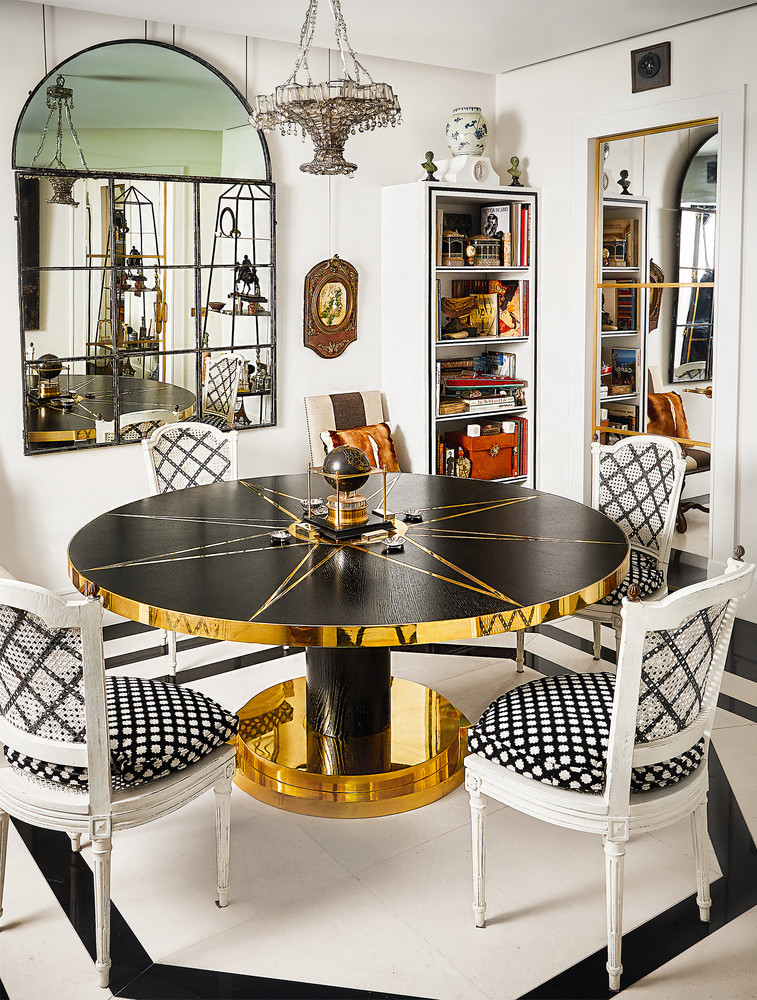 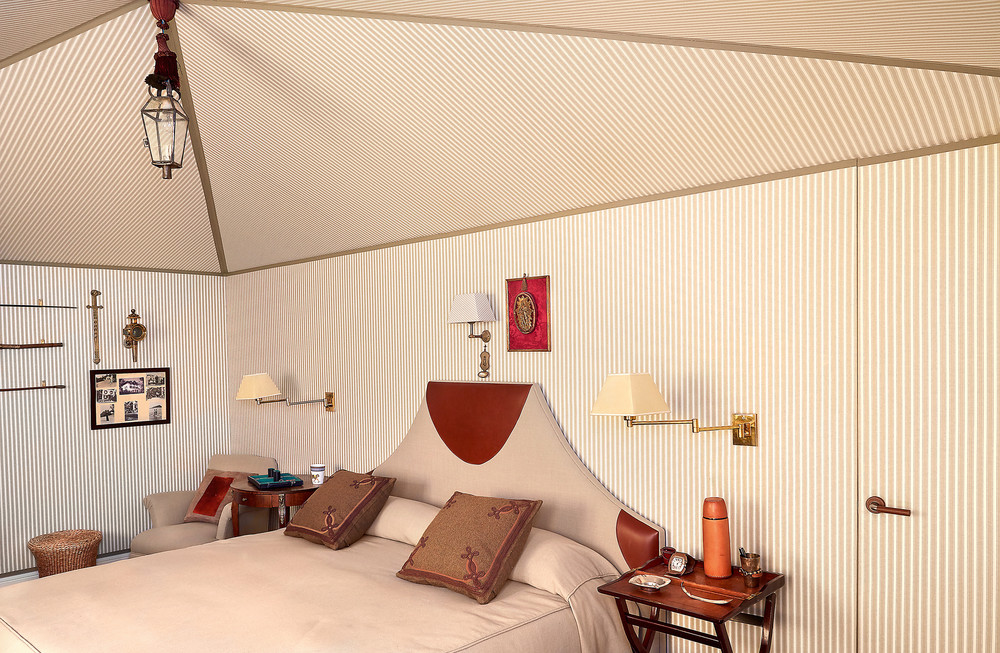 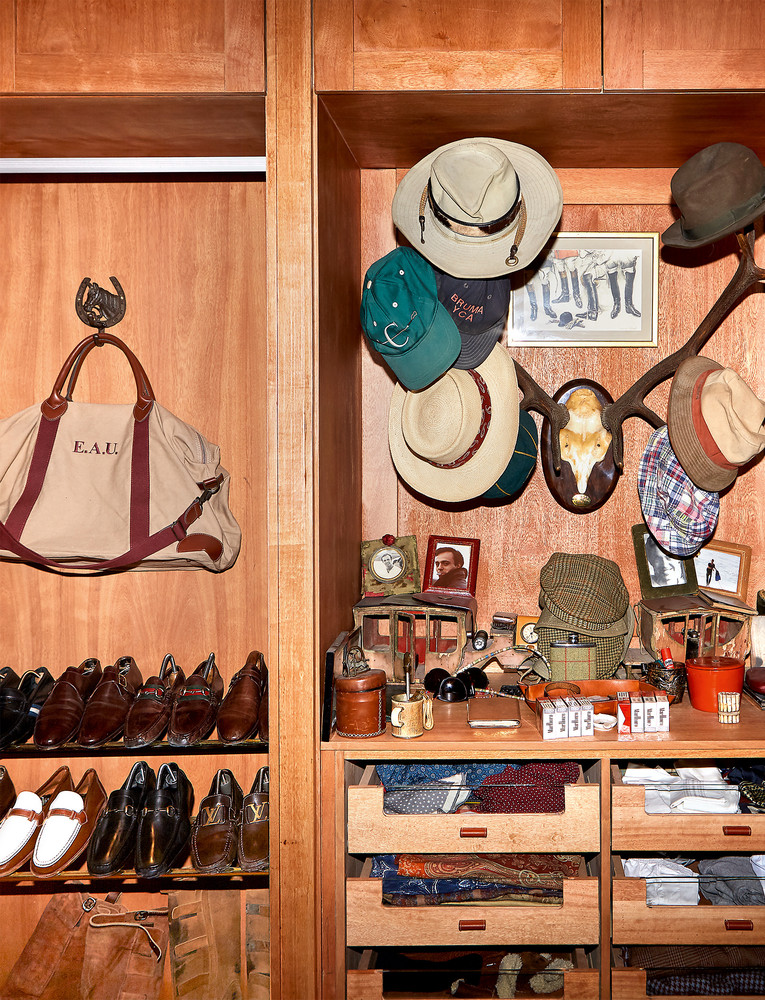 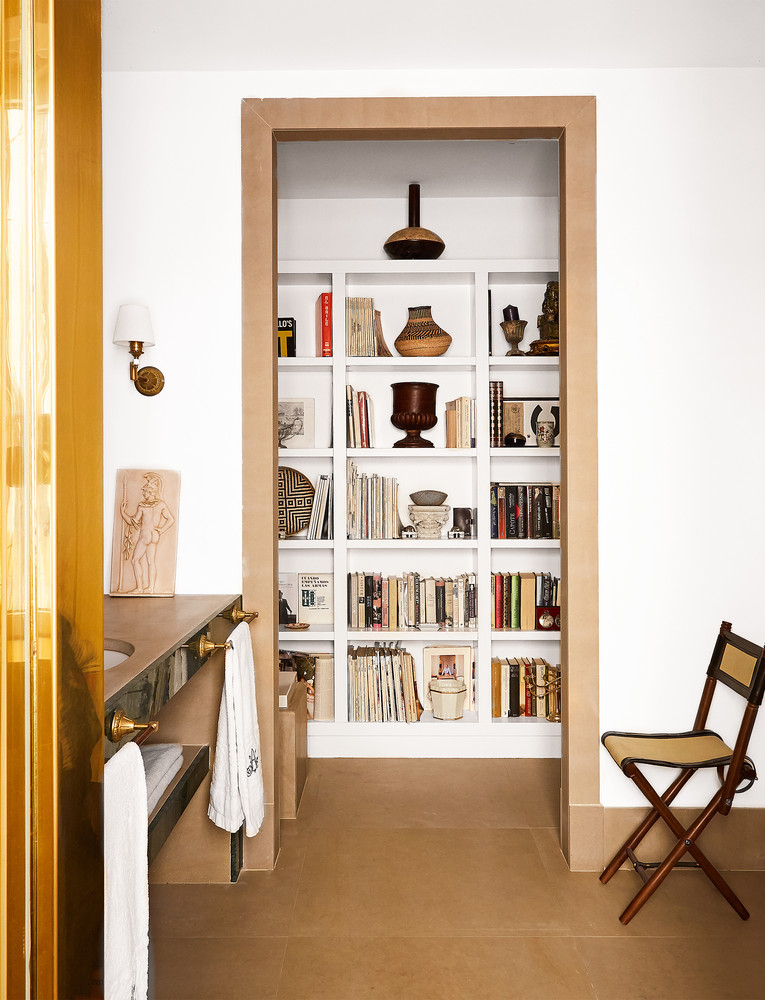 For his bedroom he recreated the painting by Eugène Delacroix The Room of the Count of Mornay. “I’ve always had an obsession with this work. I wanted to live inside her, “he confesses. Thus, he replied a tent with a striped fabric and filled it with leather and wood, military inspiration, beige and green. In addition to Magdalena, her young niece also collaborated in the final result. “He told me: ‘Uncle, this has to be refreshed, it has to be removed and rejuvenated’. So I bought a photo, some contemporary paintings … Nowadays the expensive thing is the new thing – it affirms -. But I try not to stay anchored in the past. ” The decorative finish is put by the shelves that run through the house, which are their particular cabinets of curiosities, in which the objects and books are stuck with Super Glue, so that nothing moves once has managed to mount the perfect still life. That’s right, Estanis, he does not admit half measures.