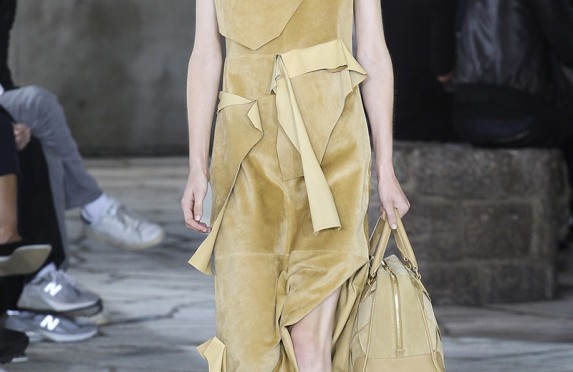 PARIS – Loewe is the official supplier of leather goods to the Spanish royal family, this Madrid firm has been crafting supremely elegant accessories since 1846. The label rose to prominence in the 1890s under the talents of German craftsman Enrique Roessberg Loewe. Loewe opened its first international store in London in 1963 and expanded into fragrances and clothing in 1972. Both the men’s and women’s lines are heavily influenced by the company’s leather legacy. The brand remains best known for accessories, like sleek, artfully embellished handbags.

Anderson signed up to be the creative directorship of the Spanish leather-goods company a year ago; since then, he’s overseen the redesign of the logo and stores, planned the advertising campaign and spent months putting together a team of young designers. “I wanted people who have no preconceptions, who are designing in a pure way,” he said. They now work in Loewe’s new studio in Paris, instead of Madrid, while Anderson commutes from London to direct them.

It’s a fresh start with high ambitions. Notions of luxury and heritage can weigh all too heavily on young designers when they’re taking up the reins at a hallowed brand, but Anderson isn’t one to suffer from that kind of anxiety. His idea of Spain is filtered, he said, through his childhood summer holidays in Ibiza. “I remember seeing all these women in their simple summer dresses on the beach. A bit New Age-y, I suppose.” That registered in the passages of linen and oatmeal ribbed knits (and happens to chime with the sub-movement of “serene” dressing which is rising elsewhere this season). Still, what held it together was Anderson’s focus on takeaway single items: his paper-bag waist leather pants, a notably gorgeous pale gray suede coat, and toward the end, his simplest woven-leather shirts. All of them were suitably luxurious in ways that, eventually might tempt the types of women who also shop at the likes of Céline, Louis Vuitton, and Bottega Veneta. He’s in the game.