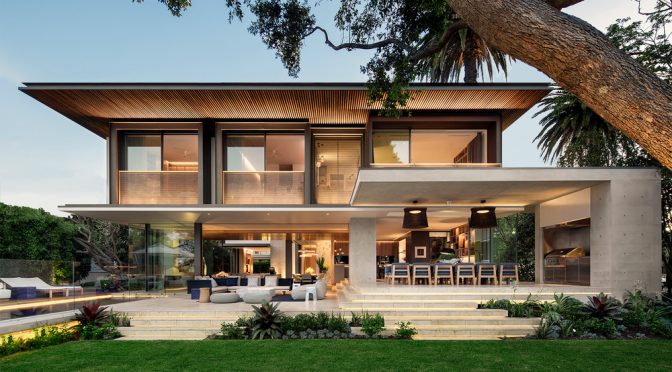 Defined lines, light shapes and an exuberant integration with nature, make this house in the natural harbor of Sydney, a dream with a view of the sea. 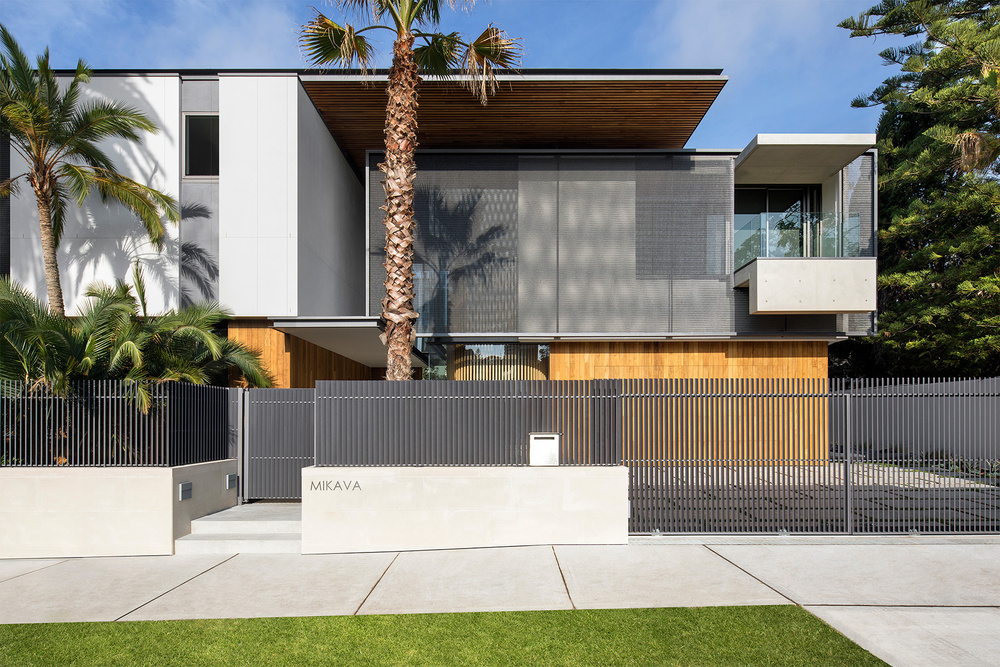 Limiting on the one hand with a recreational park and a public pier that goes into the bay and, on the other, with a pristine beach, this family housing project of the architectural studio SAOTA takes advantage of the privileged location merging with nature. Water and vegetation are an inseparable part of the Double Bay project, located in Sydney, Australia, where architects Philip Olmesdahl, Erin Gibbs and Duke Williams decided to preserve and conserve a large Lilly-Pilly tree, typical of the humid forests of Australia , and that apparently stands as a symbol of the nature-architecture symbiosis of the design concept.

The spaces open to the outside with large windows and glazed areas, in a set of volumes and overlapping plans, achieve a dynamic, sophisticated and fully integrated building without neglecting privacy. From the main elevation of the park, the façade of the building appears as a volume in which layers are superimposed on different planes, endowing its linear aspect with great depth. 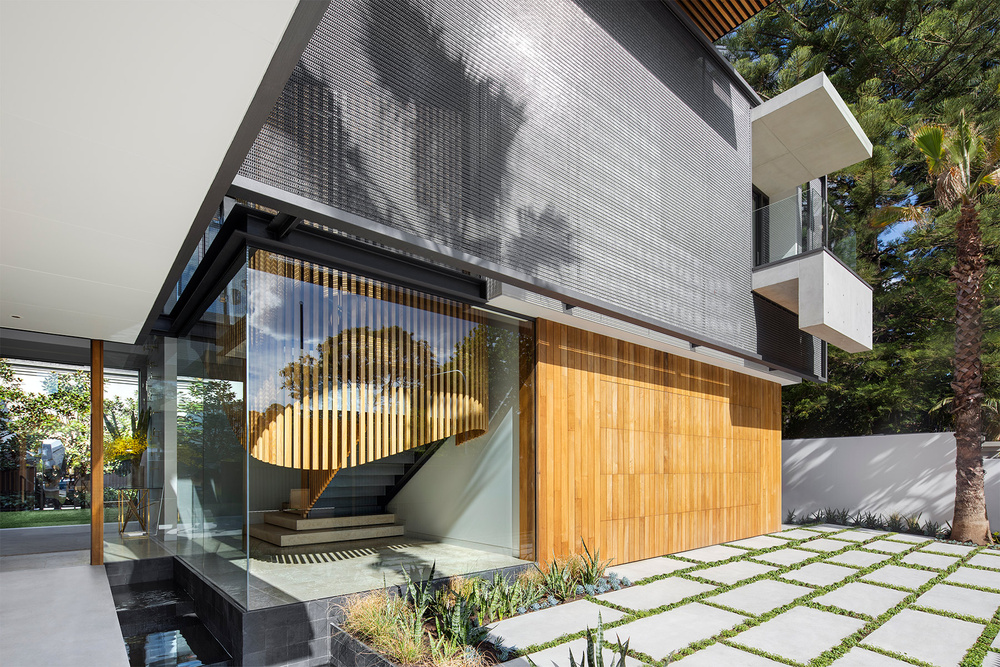 The colors also play with the same concept of overlap: plaster walls, next to the wood paneling on the lower part and the gray graphite screens of Kaynemaile. These screens, which maximize light and park views while providing the interiors with privacy, generate an effect of sophistication. For this same reason, the Kaynemaile, developed in New Zealand for the costumes of the films of The Lord of the Rings, has conquered the architectural designs.

The selection of all the materials used for the Double Bay project stands out for the care and its surprising combinations. The use of wood, white walls and travertine floors reflect the coastal environment. The concrete is used as a playful detail that, like the rendered walls, with its soft texture contrasts with the folds and roughness of Kanynemaile screens and aluminum. 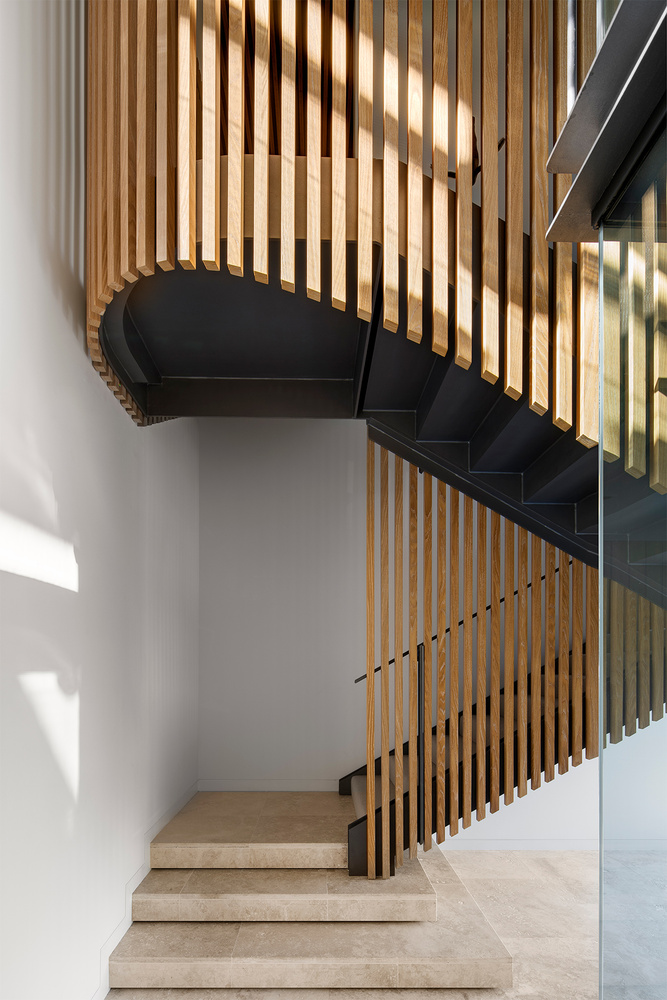 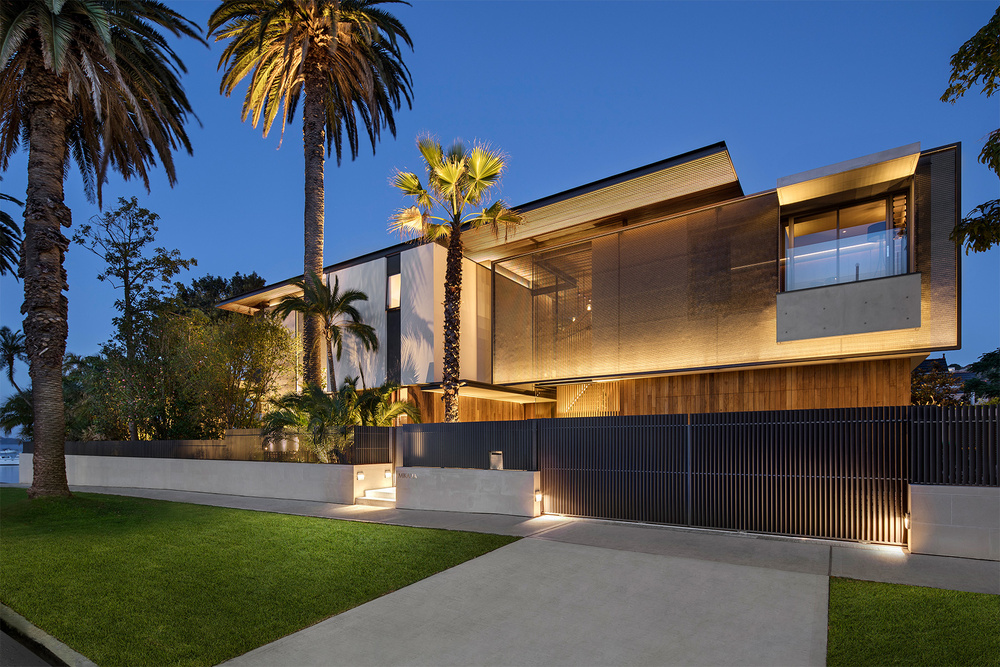 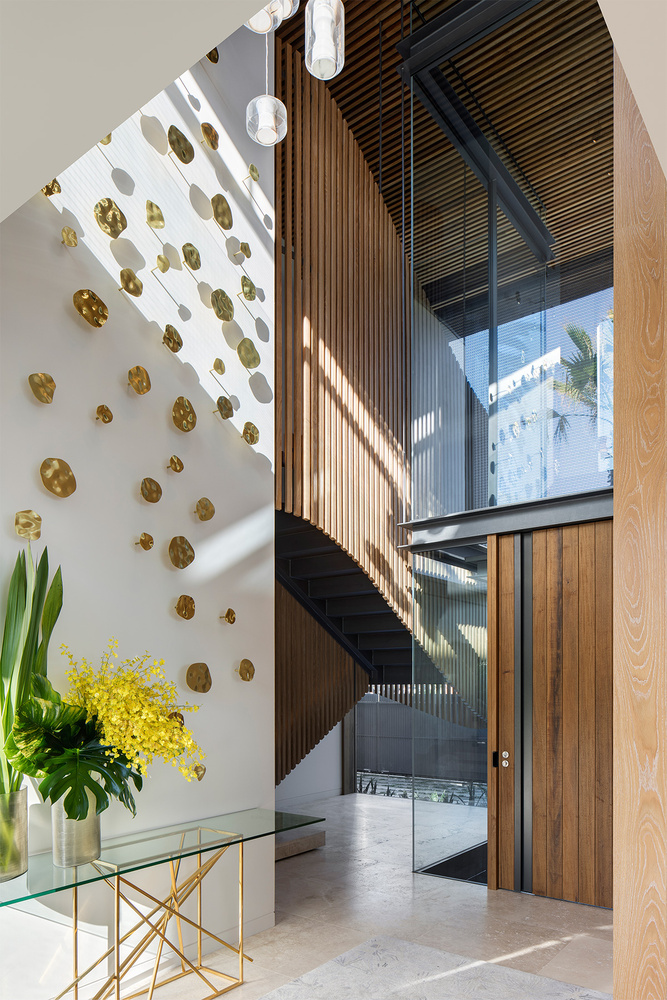 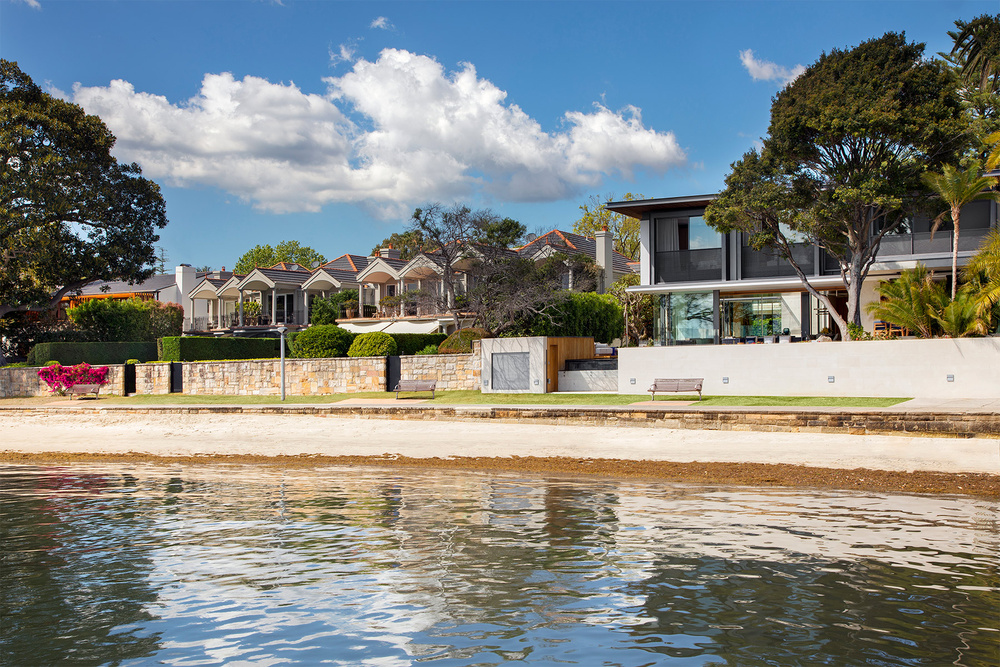 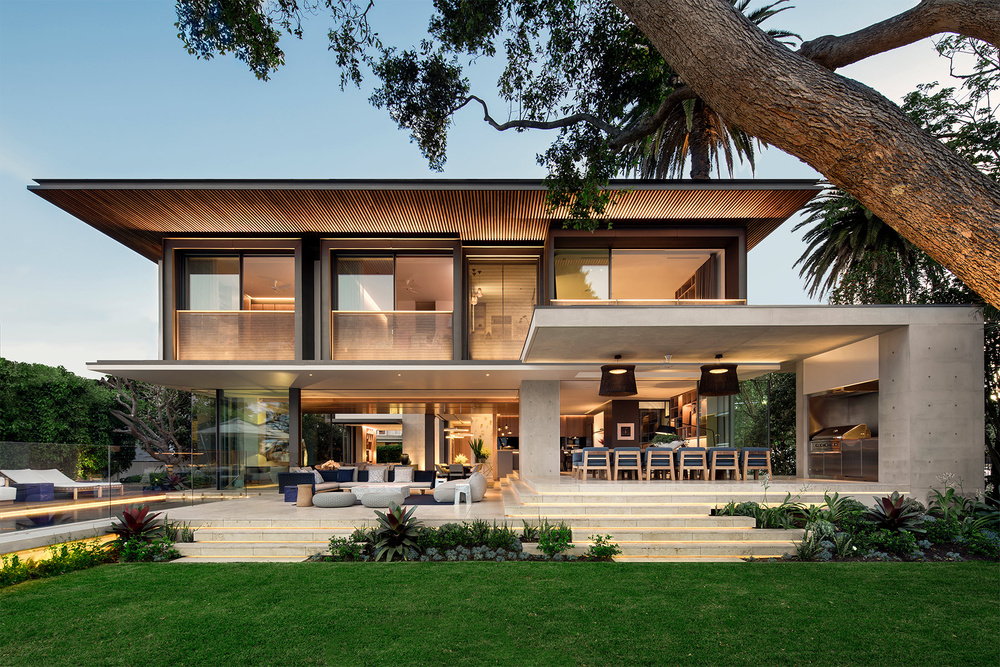 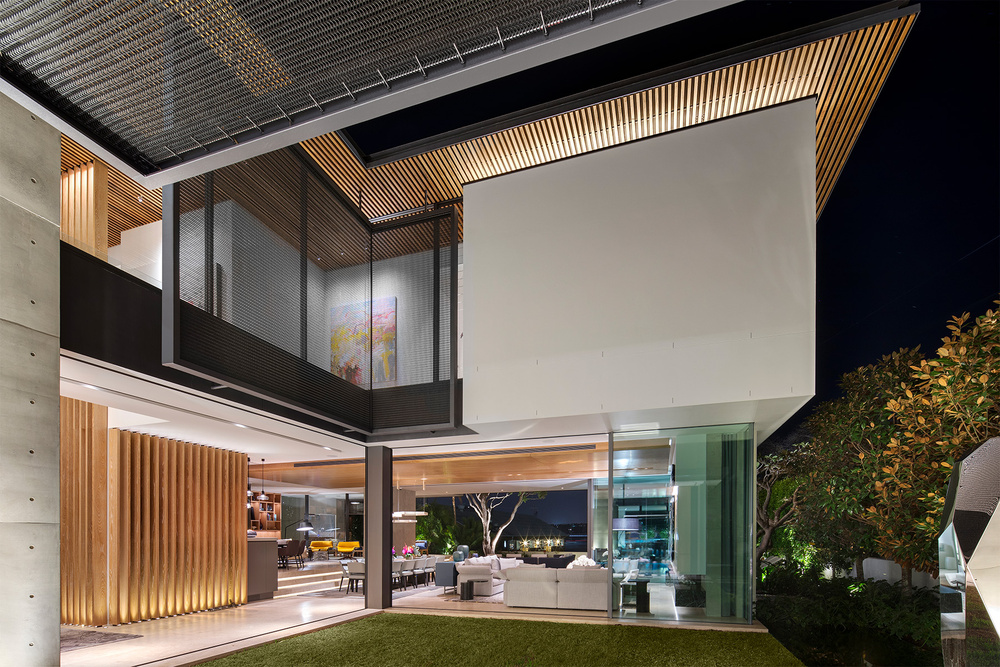 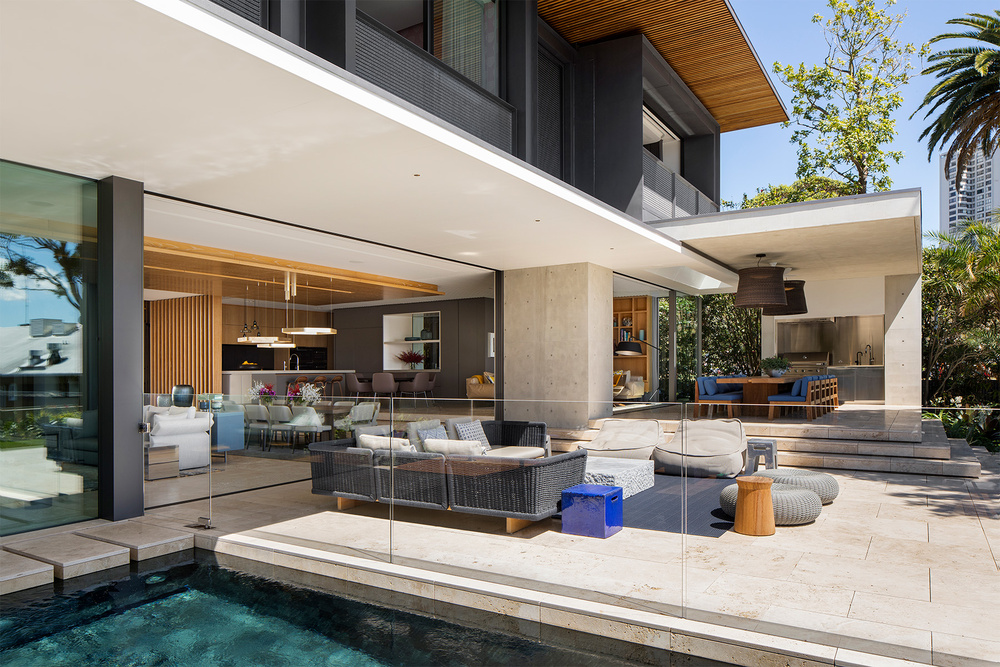 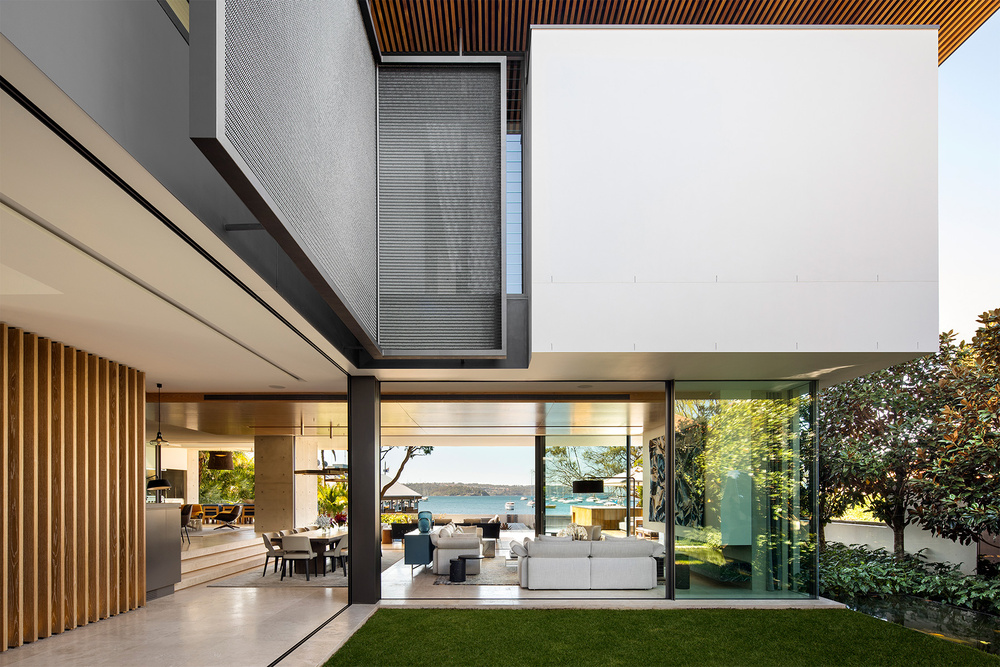 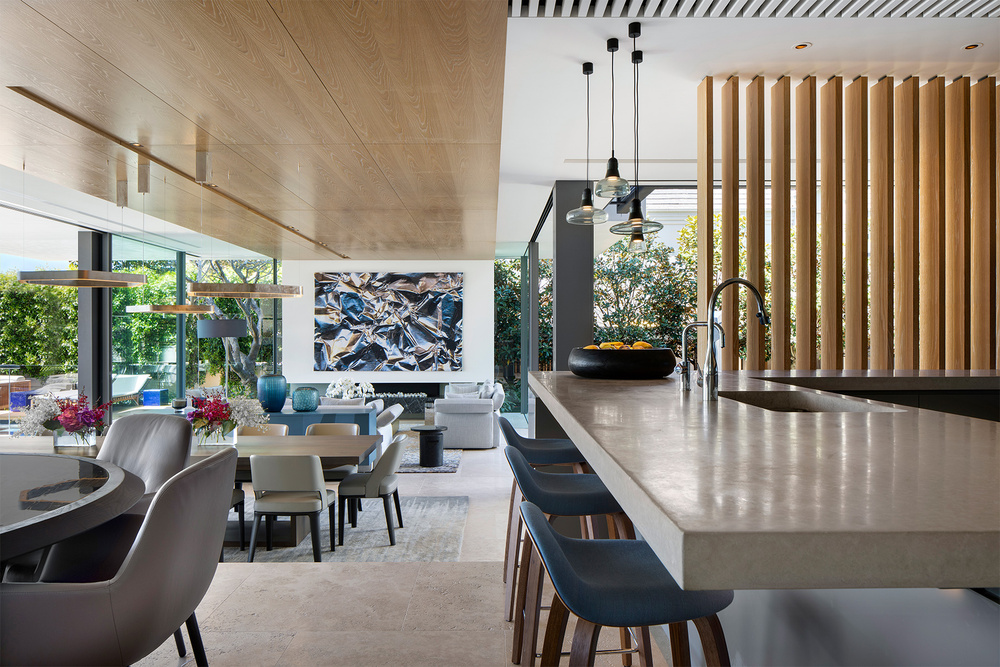 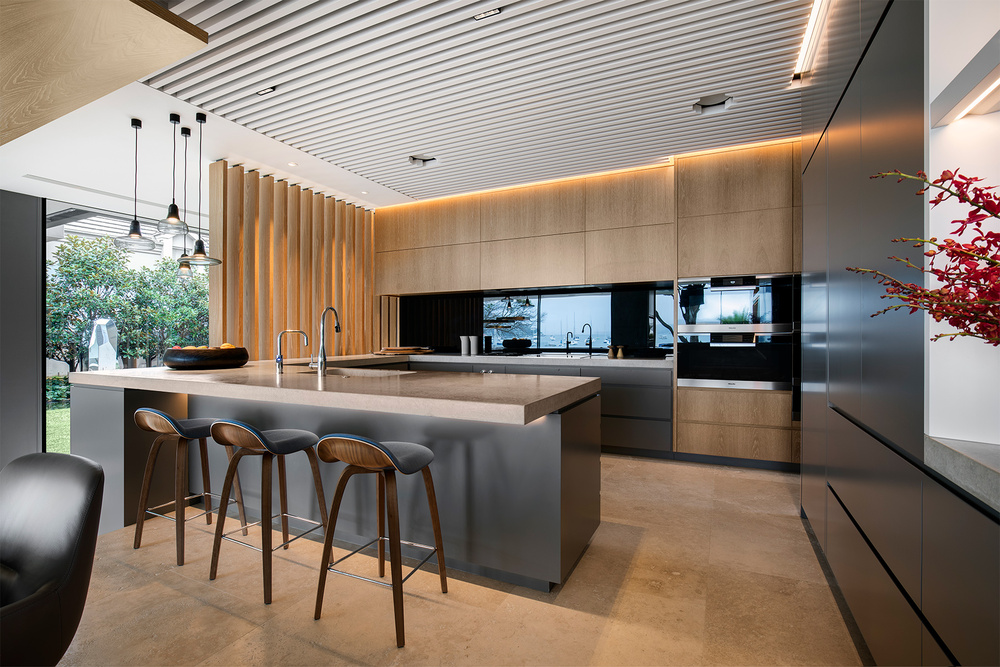 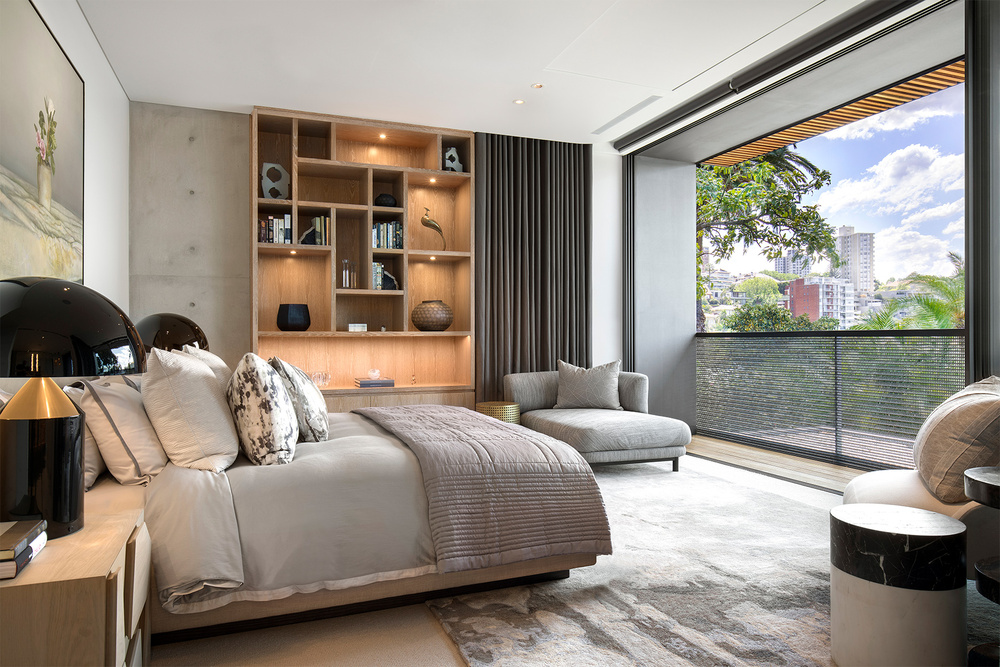 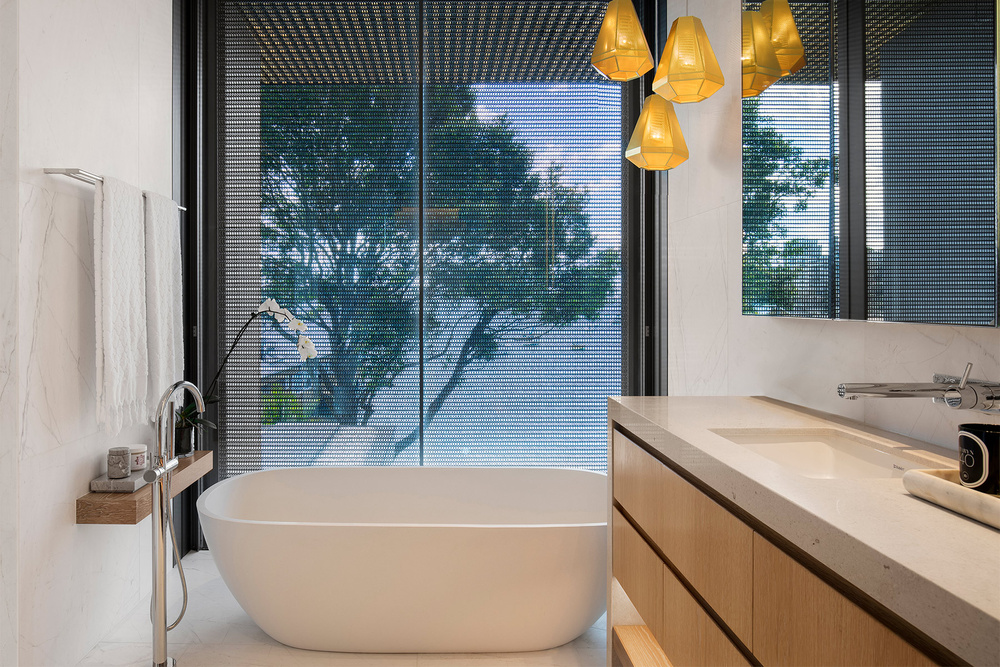 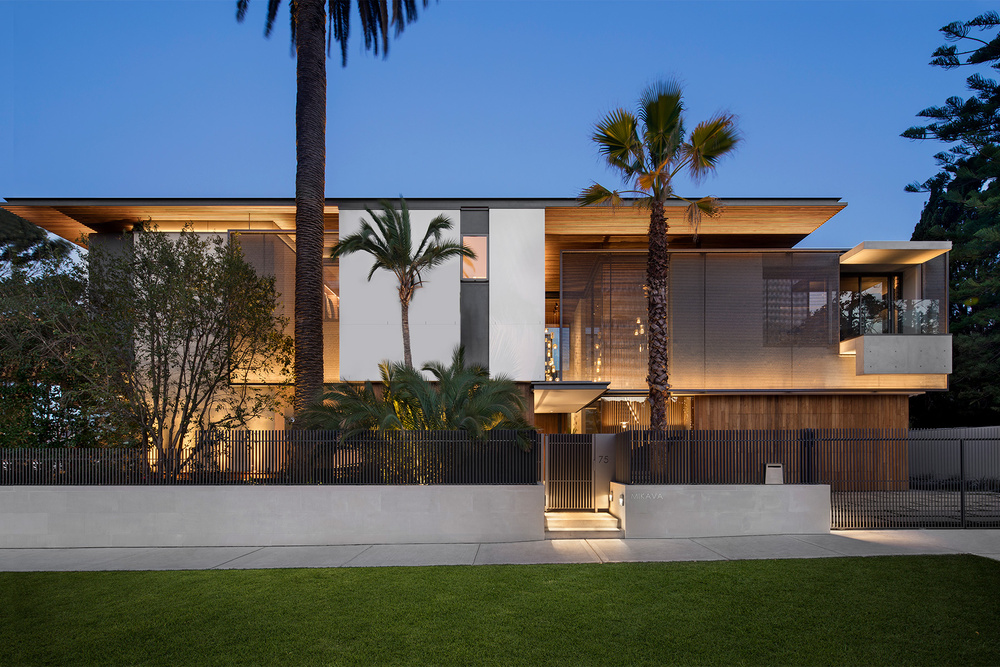 The distribution also proposes a set of integrated curved lines within the linear design. The entrance has a ramp, surrounded by water, which descends towards the main door, welcoming the building. From this place you can see the U-shaped layout of the house, with the entrance linking two wings separated by an internal garden. On this façade, a fully glazed staircase appears, connecting the main entrance of the house with the bedrooms on the upper floor.

The wing that faces the bay shows another totally different façade than the one facing the park. The huge white wall of the upper floor sits on the lightness of the ground floor, fully glazed.

This open space, on the ground floor, houses the kitchen and the dining and living areas. From the garden, which is elevated with respect to the beach, gives more privacy to the house, leaving some stairs to the sea, connecting the house once again with nature and lightness of the water.