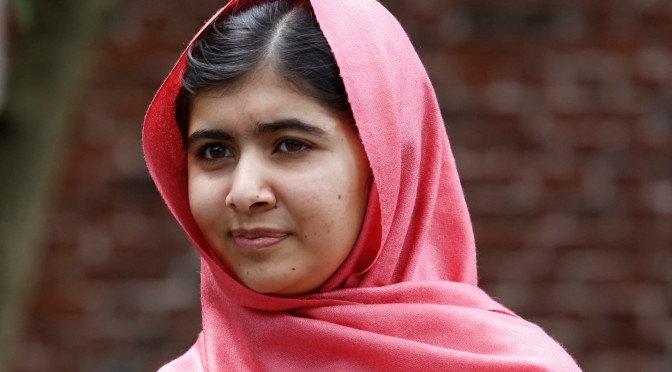 Malala Yousafzai Is the Youngest-Ever Winner of the Nobel Peace Prize.  Yousafzai is the seventeen-year-old girl from Pakistan who, almost two years ago exactly, when she was fifteen, was shot in the head by the Taliban while riding a bus to school. Yousafzai recounted the events in a book she published last year, at the age of sixteen: The gunman boarded the bus and asked, “Who is Malala?” Then he fired.

Yousafzai has responded to the question, of course, by campaigning for the education of girls, by addressing the United Nations, and by titling her awe-inspiring memoir I am Malala. When Yousafzai traveled to the United States last year to spread word about the book, she stopped by The Daily Show. “It’s honestly humbling to meet you,” an almost dumfounded Jon Stewart said. “You are sixteen. Where did your love for education come from?”

“We are human beings,” an astonishingly composed Yousafzai said. “And this is the part of our human nature, that we don’t learn the importance of anything until it’s snatched from our hands. And when, in Pakistan, when we were stopped from going to school, at that time, I realized that education is very important. And education is the power for women. And that’s why the terrorists are afraid of education. They do not want women to get education. Because then women will become more powerful.”