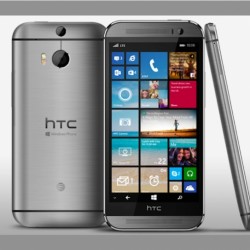 The above picture isn’t Photoshopped — what you’re seeing really is the HTC One M8 for Windows (Phone), and it’s available as a Verizon exclusive. Thanks to Microsoft’s latest update, it’s now possible for manufacturers to slap the third-place smartphone OS onto existing hardware (replacing Android), and HTC is the first mainstream phone maker to take advantage of the opportunity. Spoiler alert: The hardware of the Windows Phone-equipped One M8 is completely identical to that of the Android version launched earlier this year, aside from gratuitous Verizon and Microsoft logos. What makes this new variant so special is on the software side.

Microsoft views the new One M8 as a marketing flagship; it’s collaborating with HTC and Verizon on a nationwide ad campaign, so it appears that all three companies are committed to this device’s success. Of course, this isn’t the first time Microsoft has made these kinds of promises to HTC; a very similar thing happened with the HTC Windows Phone 8X, but that effort didn’t seem to do too well. Given the company’s acquisition of Nokia’s Devices division, it makes sense that Microsoft doesn’t want to alienate many of its long-time partners. What better way to share the love with other phone makers than to bring HTC on board?

On the hardware side, this One M8 is exactly the same 5-inch 1080p aluminum tank we’ve used for the past five months. In fact, if it weren’t for the Windows Phone logo on the back (alongside HTC’s and Verizon’s logos, making it a rather noisy affair), you wouldn’t be able to tell that anything is different until you boot it up. It comes with on-screen buttons, built-in infrared, the same Snapdragon 801 quad-core chipset and Duo Camera setup on the back — and yes, it uses an UltraPixel sensor with a resolution of 4MP, as well as a 5MP camera on the front. The height, thickness and weight are all exactly alike, too.

It’ll also come with 32GB internal storage and microSD slot for up to 128GB, as well as a 2,600mAh battery (also identical), though we’re assuming overall battery life will differ from one OS to another. Windows Phone has a good reputation for maintaining power efficiency, so I’m looking forward to testing it out to see what difference the OS truly makes. The device only comes in gunmetal gray, so silver or gold fans will have to stick with Android for now. (HTC wouldn’t say if it plans to add more colors down the road, though we wouldn’t hate a red-colored exclusive for Verizon employees at some point.)

It’s all about what’s on the inside that counts this time — the firmware will be the make-or-break factor here. It comes with the first update to Windows Phone 8.1, so fans of the OS won’t have any problems getting around. Cortana, folders, quick access panel… they’re all present, but they’re not alone.

That’s because HTC’s brought over several of the One M8’s defining features. BlinkFeed is included, but you can’t get to it by swiping to the right; here, it’s presented as a separate app. I found it a little funny that it actually looks like it belongs on Windows Phone, primarily because of its tile-based setup. Additionally, video highlights are included as a separate app, so you can still put together fun 30-second clips using whatever theme and music you want. Sense TV is also here, and most of the Duo Camera effects made the cut as well. Note that I said most; a few effects, such as seasons and stickers, aren’t available. (The options I use the most, such as foregrounder, Ufocus and Dimension Plus, are all there.)

Because the stock Windows Phone camera isn’t designed to handle HTC’s Duo Camera customizations, the company added its own default app. The UI is nearly identical to what you’d find on the Android version, although Zoe functionality and dual-capture mode are missing. (The brand-new Zoe app won’t make it to Windows Phone, either.) You can download other lenses, however, so hopefully HTC offers these modes as downloadable options at some point. You’ll still be able to save your manual settings though, so there’s still plenty of the same functionality you’ve enjoyed on Android. It’s reassuring to see that the company’s engineers were able to recreate many of its best features for Windows Phone, so it’s an indication that the OS is able to handle most manufacturer-specific needs.