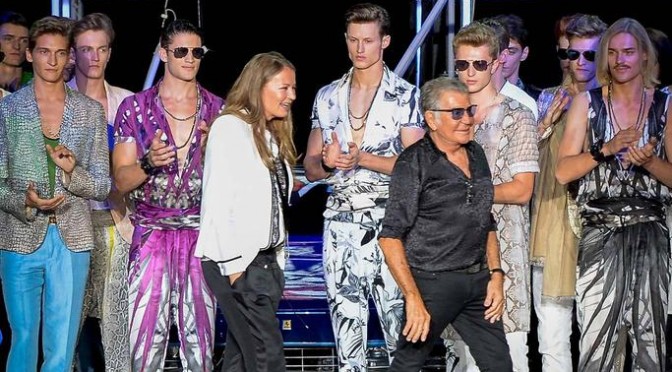 ROBERTO CAVALLI MEN SPRING 2015 RTW – RUNWAY (MILAN): Roberto Cavalli’s center of gravity shifted to Miami for Spring. He recently opened a restaurant there, and his new collection for men was all palm trees, peachy jacquards, sheer shirts, and bird of paradise prints.

The Miami playboy—that was the creature Cavalli claimed to be channeling. Picture him spinning down Ocean Boulevard in his Daytona with his mustache, his highlighted hair, his palm-printed tank and track pants with—the pièce de résistance—a length of python-printed chiffon sashed round his waist. A regular sex pirate, muttering “Hola, babe” to every woman at every traffic light. Not wildly right for this moment in time, in other words.

Roberto Cavalli is in a curious kind of shadow zone. The women’s Resort collection he showed the other day was a quantum leap into something new for him: true to his signature, but forward, fresh, bright, optimistic. His men’s collection, on the other hand, felt like it was treading water. Who was this man? For some misbegotten reason, Deney Terrio’s Dance Fever came to mind. Now that was truly big in the eighties. And maybe that was the problem here. Too referential, too much brass (or gilt). Cavalli is too much of an artisan to ever let himself down completely—there were still some supremely impressive fabric tricks—but this particular show was cast into the shadows by the steps he is taking with his womenswear. Source: style.com