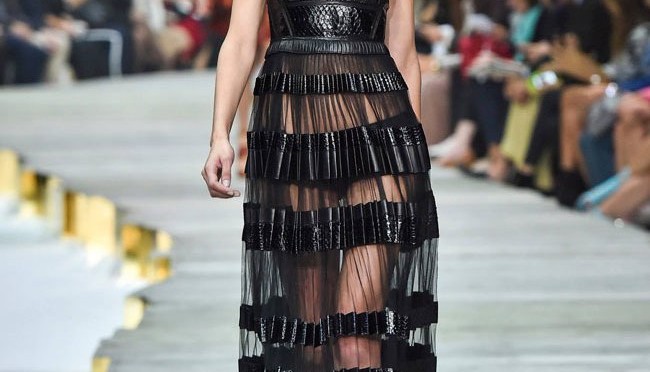 Roberto Cavalli Women Spring 2015: The Great Escape –“Inspired by the carefree spirit of summertime, Roberto Cavalli presented a vibrant and colorful spring-summer 2015 collection at Milan Fashion Week. The Italian designer had his penchant for kaleidoscopic prints fully on display with an outing of bold stripes, animal spots, florals and abstract shapes decorated across long maxi gowns and flirty, ruffled skirts. Denim was also featured on the catwalk, frayed and distressed —a contrast to the Cavalli woman’s silky blouses with embroidered details. A dress worn by Binx Walton, adorned with feathers and glittering details, brought a high-octane moment to the runway”.

With Seventies homages all over Milan, it was a given that Roberto Cavalli, who made a name for himself during those years, would feel right at home. For spring, he approached fashion’s never-say-die decade via languid silhouettes that exuded lightness and freedom— “a carefree escape,” as he put it in the show notes.

Cavalli called the collection “The Light of Summer” and made that point with the first few vibrant, pleated dresses, some featuring ribbons and tassels. The psychedelic floral prints may have swung a little more Sixties, but the airy shapes had that Seventies sartorial ease. Equally strong were the more romantic numbers, especially the white silk-chiffon floor-length dress featuring a bow-and-tie detail at the neck, as well as an embroidered tulle and eyelet inset. Paired with washed denim, these looks had a vintage, prairie charm.

Below the gallery of Roberto Cavalli’s Women Spring 2015: The Great Escape runway.