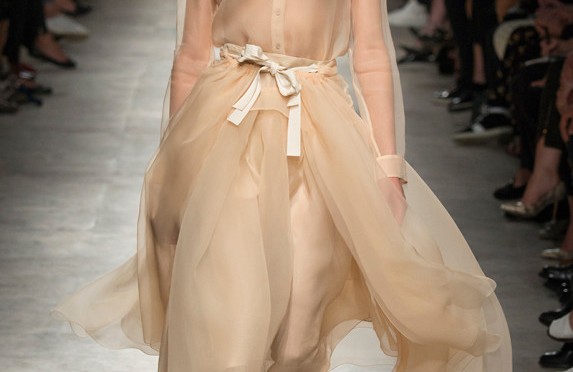 PARIS – This is Designer Alessandro Dell’Acqua’s second season at Rochas, and he’s made some adjustments and renovationssince his rocky debut this February.  For Spring, a hummingbird pattern that he lifted from the archives and used as both a print on georgette and as a beaded embroidery on silk faille signaled his intention to lighten things up. His fabrics were often transparent or nearly so. The hand-painted flocked organza of a button-down shirt and a full, calf-length skirt was opulent yet airy. And Dell’Acqua went gung ho for lace, patchworking Chantilly and guipure and macramé on a single slipdress or layering a strapless lace smock over a longer, narrower lace skirt.

It’s always difficult when a designer takes over from a quirky, critically beloved—and intensely personal—predecessor; and such is the case with Alessandro Dell’Acqua, who returned to the well for his third collection at Rochas—following up his sweetly romantic resort collection with a frothy, filmy take on mostly mid-century-modern silhouettes for spring 2015. There were primly collared sheer tops boasting large Rs on the breast under full, layered skirts and lace-inlay tea-length ones; there were ribbon–be-sashed flora- and fauna-embroidered gossamer caftan-style dresses (truly sheer, and paired with peach-colored bloomers); there were long, sweeping skirts (occasionally prairie or peasant) and intricately beaded coats and the sporadic gold or white sequin-covered silhouette; there were frilly frocks and bobby socks and even utility-belt-style cinches across some chests. But where Dell’Acqua hit his stride was with a series of flirty camisole-style dresses, and it was here that interest seemed to peak amongst showgoers—more than for the gauze and glitz of the fifties fantasy-housewife fare (though the little sporty, sheer, contrast-trimmed kicky knit tops were great). Source: vogue.com