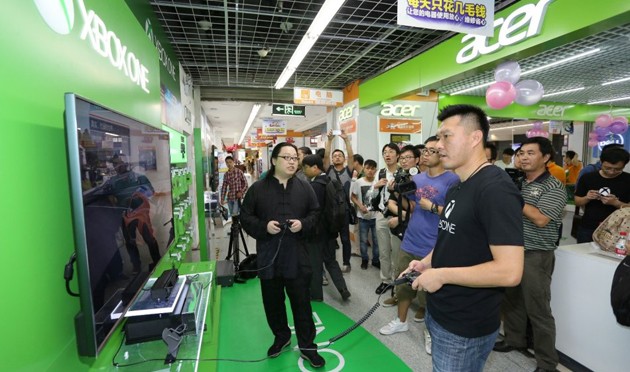 CHINA: Chinese gamers have just witnessed their first major console launch since authorities lifted their 13-year ban on most video game systems. Following a last-minute delay, Microsoft has released the Xbox One in mainland China; people in 37 cities across the country can now pick up a shiny new machine without having to resort to unofficial channels. There are only 10 government-approved games on offer from day one, including Dance Central: Spotlight and Forza Motorsport 5, but over 70 China-friendly titles are supposed to be in the works. As for Sony? It has yet to confirm just when the PlayStation 4 reaches China, but it’s doubtful that the company will be far behind — it won’t want to give Microsoft too much of a head start.

People actually lined up for the box, says Kotaku. That’s despite the price tag of 3,699 yuan, or about $600 — and that’s without Kinect, mind you. The Kinect-less version of the system in the U.S. goes for $399, same as Sony’s PlayStation 4. The Chinese are paying 50% more, in other words.

When the Wall Street Journal wrote about that jacked-up price this summer, it noted the obvious: things like tariffs and exchange rates play a role, so that’s part of it. China’s version of the Xbox One comes with a two-year warranty (we get just one here), six months of Xbox Live Gold (as opposed to 30 days here, and membership is $60 a year), plus a few free games (Powerstar Golf, Neverwinter Online) and discounts on others.

But that still doesn’t explain the 50% hike, even when you take into account disparities between the U.S. and China in household incomes, the level of debt to average income, the number of homeowners with mortgages and so forth. The in-betweeners must be taking a generous slice.

The Xbox One was supposed to go live in China six days ago, September 23. Why Microsoft delayed is anyone’s guess (not to rethink launch pricing, apparently). The challenge Microsoft faces from here is competing with the black market, where foreign-wrought game consoles have been on sale throughout the ban for considerably less moola.