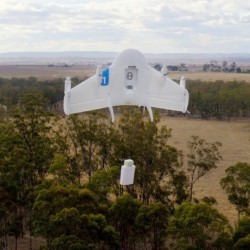 Amazon is selling a phone and reportedly even getting into the online ad business, so of course Google is ready to compete with its still-in-testing Prime Air drone delivery service. The Atlantic has a report on what is being called “Project Wing,” a part of the Google X labs that have worked on Project Loon, Glass, driverless cars and so much more. As shown above, the idea is for a tail sitter unmanned aircraft (shown above, described as a hybrid between a plane and a helicopter that takes off and lands vertically), where the drone flies in like a plane, then hovers and lowers a package to the ground by wire before releasing it. The “egg” at the end of the wire hits the ground and drops the package before being pulled back up into the drone. So can you expect to receive a Google Shopping Express order this way anytime soon? Probably not right away, as the test shown took place in Australia, and there’s plenty of testing and regulatory hurdles to get over before anyone is dropping off packages this way. If you’re an interested partner (hey Netflix, maybe drones aren’t a joke?) there’s a sign-up sheet available.