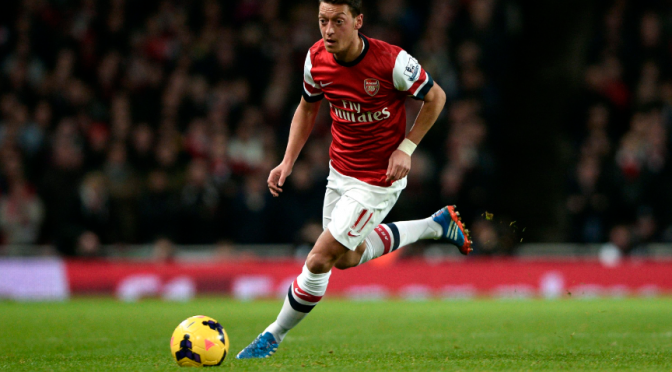 LONDON – Arsenal’s soccer player Mesut Ozil has been ruled out for up to 12 weeks with a knee injury.

But he arrived at the German camp with a problem in his left knee and an MRI scan in Munich on Wednesday showed damage to the joint.

A statement on the German Football Association website read: “The MRI examination revealed a partial rupture of the outer band of the left knee joint.

“The treatment is six weeks of immobilisation of the knee joint. Mesut Ozil is likely to be [out for] 10 to 12 weeks.”

Ozil complained of a sore knee after the defeat at Chelsea on Sunday and Arsenal say they advised the German FA of the situation. The former Real Madrid player has now returned to the Gunners for further assessment.

“It is too early to say how long Ozil may be out of action,” said Arsenal in astatement on the club website.

If the diagnosis is correct, it means Ozil may not be available to Arsenal manager Arsene Wenger until after Christmas.

The playmaker signed from Real Madrid for a club record £42.4m in September 2013 and has scored eight goals in 46 starts.

He has been criticised for some of his performances, but helped the Gunners win the FA Cup last season – the club’s first trophy in nine years.

The injury gives Arsene Wenger further selection problems in midfield, following injuries to Ramsey and Arteta earlier in the season.

Ramsey could be out for a further month after limping out of Arsenal’s1-1 draw with Tottenham on 27 September.

Olivier Giroud (broken tibia) and Mathieu Debuchy (ankle) also remain out of contention for a lengthy spell and Theo Walcott is still a few weeks away from returning to training after sustaining a cruciate knee ligament injury in January.

Ozil will miss Germany’s Euro 2016 qualifiers against Poland on Saturday and the Republic of Ireland next Tuesday.

He looks certain to be out of the national team’s fixtures against Gibraltar and Spain in November.