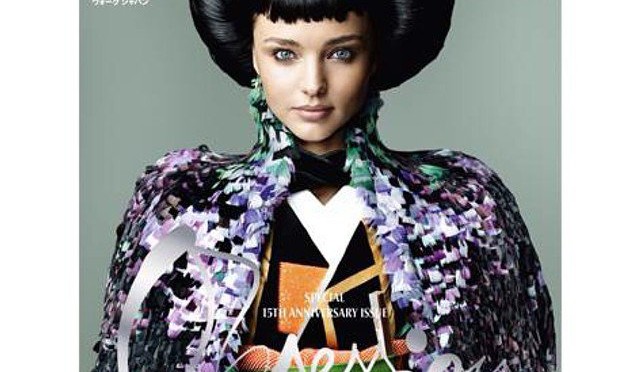 Vogue Japan 15th anniversary – The issue of Vogue Japan taps Miranda Kerr as its cover star in an image captured by Mario Testino (who also photographed her for GQ UK earlier this year). Miranda trades in her usually seductive style for something more elegant wearing Japanese inspired looks ranging from samurai to Manga-inspired. Anna Dello Russo styled the shoot. Check out some previews of the editorial shared on Vogue Japan’s Instagram, below.

Though Miranda Kerr looks striking, one major problem with the theme is that it’s once again using a white model to represent a non-white culture. They could’ve easily used a Japanese model instead.

But Miranda is very popular in Japan and has done many ads and commercials there, so maybe photographer Mario Testino and the Vogue Nippon crew thought the issue would be more successful with the supermodel on the cover.

Regina George may do car commercials in Japan, but Miranda Kerr does Lipton ice tea and laundry detergent commercials! She wins!