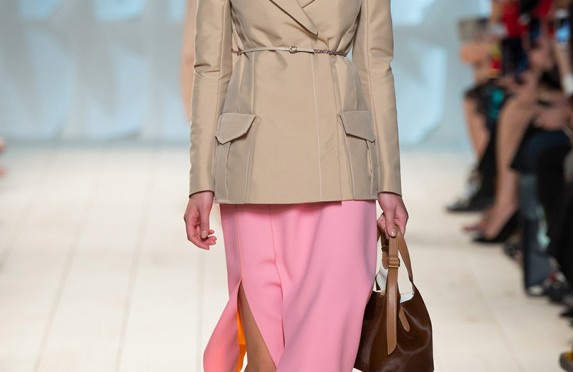 PARIS – A feminine and soft palette was the main focus of Nina Ricci S/S 2015 RTW collection.  The skirts, blouse and dresses fits perfect to every women.  The formal print dresses are amazing and fits the women silhouette like a glove.

In 1945 Paris, Nina Ricci’s son, Robert, conceived the idea of a “Théâtre de la Mode”—a series of vignettes (created by France’s leading decorators and stage designers) that would depict scenes from Parisian life, peopled with miniaturized mannequins dressed by the capital’s leading couturiers, milliners, jewelers and shoe-, handbag-, and glove-makers in scaled-down versions of their key pieces of the season. The traveling theater proved a triumph, affirming France’s creative supremacy in fashion, in spite of the privations suffered during the recent Nazi occupation.

Peter Copping, fascinated by this story, began to think about the idea of “make do and mend” and “DIY couture”—of how to make fashion with limited physical resources, by customizing and repurposing available materials. So his girls marched on humble scrubbed pine floorboards and the backdrop was a screen of sheets of cartridge paper that fluttered in the breeze.

And instead of suits, Copping showed mixed separates that might be finished in a random colored thread, say, or fastened with buttons that didn’t quite match up. A trench coat might have been cut up to make a shapely jacket, for instance, or a cardigan turned back-to-front to make an intriguing top. A tweedy coat might be finished with the sleeves of a cotton shirt, whilst a skirt could be fashioned from a woven lattice of scraps of lace and chiffon scarves. (The artisanal fabric works of Louise Bourgeois also figure large on Copping’s inspiration board, alongside Cecil Beaton and Norman Parkinson photographs of elegantly clad models standing in the bomb-damaged buildings and streets of London and Paris—“Fashion is indestructible,” wrote British Vogue at the time.) And if those skirt-lengths were prim, they were scythed to flow in leg-baring panels.

Complementing the collection, which was firmly grounded in the fluttering romance that Copping has made such a strong and enduring signature for his work at the house, were jewels by Sonia Boyajian, who sat in the studio during fittings, welding her pliers and skeins of metallic thread, imaginatively garlanding rings and necklaces and bangles with objets trouvés from her archives—including tiny perfume bottles that jangled prettily as the girls strode the runway.