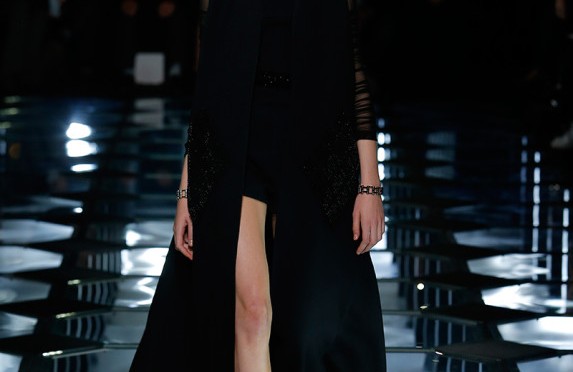 PARIS – Up until this point at Balenciaga, Alexander Wang has been fairly reverent, not just of Cristóbal Balenciaga and his couture codes, but also of Nicolas Ghesquière, Wang’s immediate predecessor.

The first model stormed out to the soundtrack’s thumping beats in a sweeping duster coat that peeled back to reveal a snug, partially sheer tee and cutaway shorts. At a glance, it was tempting to see signs of Wang’s early work in New York—the way he blended sport and the street. But that’s only part of the story. Wang was in Paris this summer during the Tour de France, and it was the world of cycling—the competitors’ second-skin kits, the shoes that clamp into pedals—that influenced the built-for-speed feeling of this collection. Silhouettes were lean and athletic: the pants leggings-tight, shirts clingy, and dresses cut like a glove.

Embroideries elevated it. Balenciaga, Wang pointed out at a preview, wasn’t only about pure, austere lines. “There was a long chapter of decorative embellishments,” he said. This is more complicated territory for Wang; couture-type handwork has proven tricky for him to master in his two years at the Paris house. His approach here was to stick with tonal embroideries and think along geometric lines, and it paid off. A black jersey with jet beading and burned ribbon stitched in a lattice pattern looked like a keepsake, but it had the cool factor of a T-shirt. A net dress strung with black seed and bugle beads gave off sporty vibes despite its lofty provenance (it was inspired by the diamond tile floor of Cristóbal’s atelier). Not everything connected like those two pieces, but this was nonetheless the right track for Wang at Balenciaga. Source: style.com