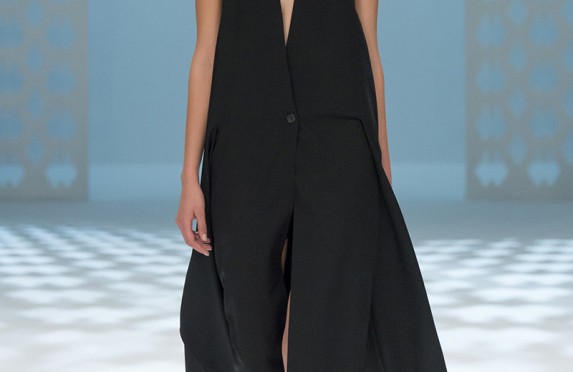 PARIS – The runway isn’t a place where you’d expect to find shade, and yet the lights at Hussein Chalayan’s show today were filtered through a distinctive Moroccan screen. The title of the collection, “Moor’s Gaze,” gives a view toward what the designer was thinking about for spring 2015. “I’m particularly interested in the link with Andalusia, Spain, and the Maghreb in the North Africa,” he said backstage after the show. “All the irrigation channels that connect them, it was really a celebration of that.”

To evoke that picturesque landscape the designer drew from geometric motifs that you might expect to find in the region’s most iconic landmark, the Alhambra, an opulent palace in Granada where the Muslim rulers held court. The shadow-play effect was echoed in broderie anglaise–trimmed looks that put a sculptural twist on classic shirting. Chalayan is well known for his architectural sensibilities and they came through in a restrained manner with subtle folds at the bustline of floor-length jersey dresses.

The show ended with a trio of evening looks that were embroidered with veiled ladies, a reference that harked back to the groundbreaking and provocative collection that he showed in the late nineties. And given the current climate in the Middle East, it’s tough not to look for a message here.

Chalayan said it wasn’t about the Arab world, but rather about exploring the idea of hiding and how the boundary between the wearer and her clothes is often obscured. And it’s true that there was a somewhat larger theme of blurred lines threaded through the collection: One sundress embroidered with orange trees came with a raincoat cleverly tucked into its pleats, while what appeared to be a simple silk blouse from the front came finished with a system of figure-flattering drawstrings in the back. If there was a clear and convincing message to take away for next spring, then these transformative yet surprisingly wearable pieces were it.