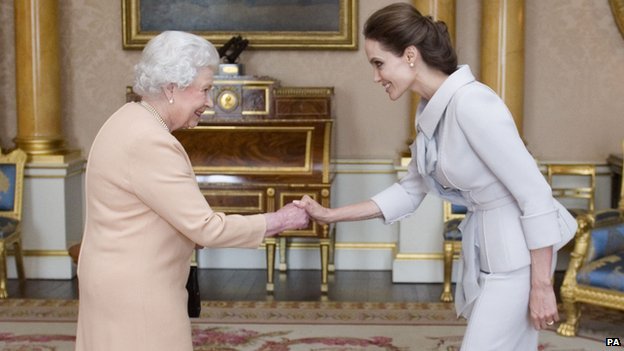 LONDON – Actress Angelina Jolie has been made an honorary dame by the Queen for services to UK foreign policy and the campaign to end war zone sexual violence.

The 39-year-old star was presented with the insignia of an Honorary Dame Grand Cross of the Most Distinguished Order of St Michael and St George on Friday.

The investiture took place during a private audience at Buckingham Palace.

The Girl, Interrupted and Maleficent actress was recognised in the Queen’s Birthday Honours earlier this year.

As a US citizen, Jolie cannot be addressed as Dame

Jolie is a special envoy for the UN High Commissioner for Refugees and co-founded the Preventing Sexual Violence Initiative (PSVI) in 2012.

The award was first announced in June during the week when Jolie was co-chairing the End Sexual Violence in Conflict (ESVC) global summit in London with then foreign secretary William Hague.

The US actress said at the time that it meant “a great deal… to receive an honour related to foreign policy”.

Jolie’s investiture follows her recent marriage to her actor partner Brad Pitt, with whom she has six children.