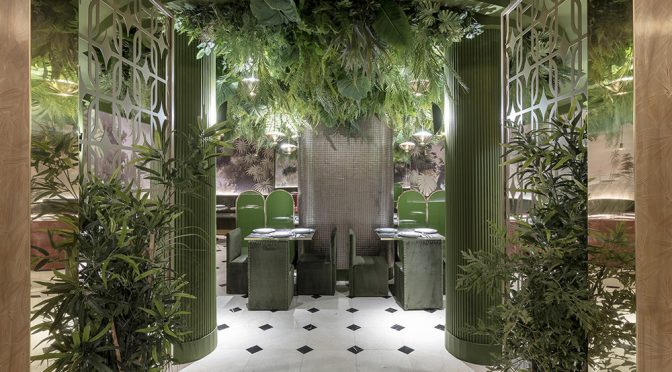 The ‘Purnima’ restaurant in Madrid inaugurates interior design with the studio ‘Madrid in Love’.  Velvet, brass, mirrors and a careful vegetable world make it a trip to India more elegant. 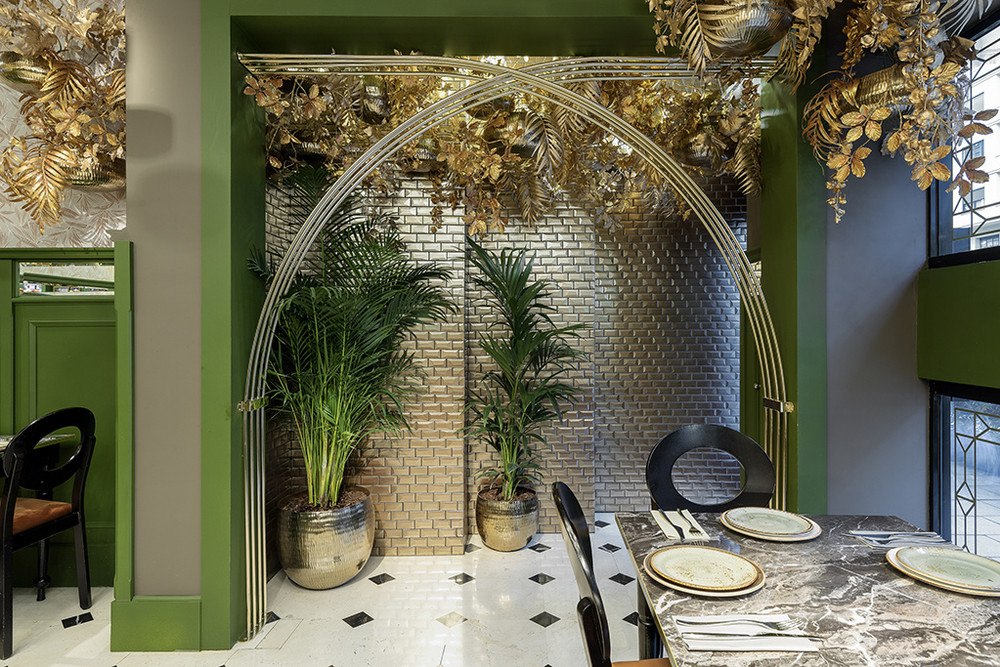 A dark but bright facade is the first thing we see before entering the Hindu restaurant Purnima. Few things make presage that its interior design is a homage, without complexes, to India more striking and brilliant but without losing an iota of elegance. A space in which the vegetal and the golden blend together to create a style that is almost timeless.

Although it opened its doors in 2015, in the middle of Goya Street in the Salamanca district, the restaurant opened in October this year a new interior design in keeping with its traditionally Hindu menu: classic but with striking touches. The transformation of the premises of two floors and 150 meters was completed and has been carried out by the studio Madrid in Love, architects among others of the acclaimed new Commercial Café. “With Púrnima we wanted to transfer the client to traditional India, translating it to our time. We did it with materials such as brass, gold metals, velvet, lacquered wood, mirrors and a lot of vegetation, “they explain. 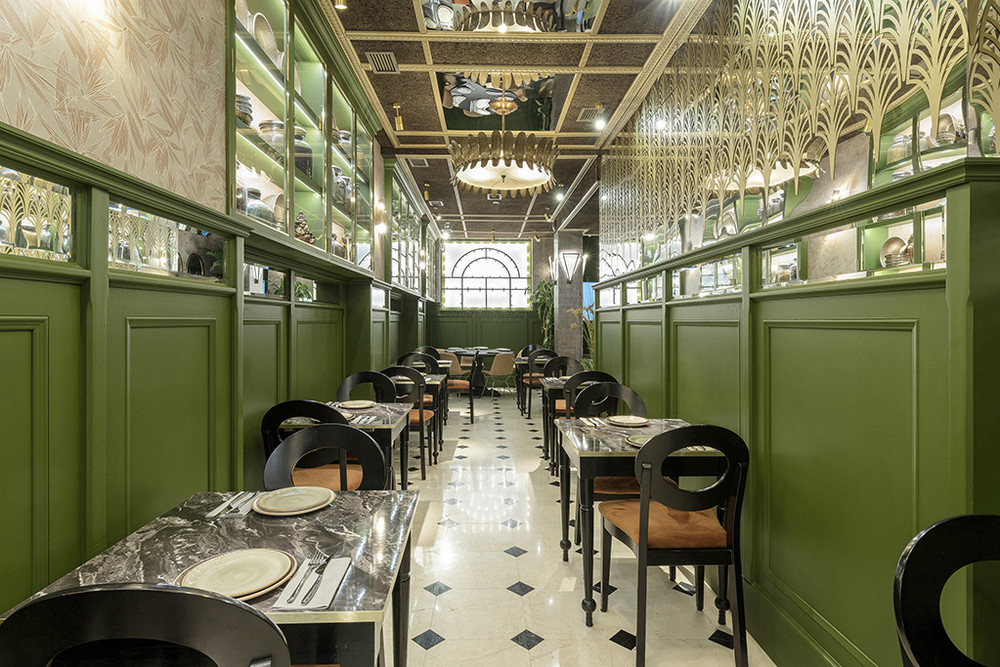 On the first floor, at the foot of the street, a golden arch welcomes guests, who immerse themselves in an environment dominated by green, thanks to the tiles, and where striking chandeliers from the firm Arterios crown the the ceiling. “In addition, with the corridor full of spices we have tried to wrap the visitor, so that the room is impregnated with those characteristic smells of India,” they comment from the studio.

The tables, of different sizes and shapes, have been designed by Madrid in Love, as well as some of the luminaries, in which special attention has been paid to the warmth. The chairs are from the firm Versmissen while the seats, also on the other floor, have been covered in green and red velvet.

However, the real star of the place is the basement which is accessed by a corridor with huge jars full of spices and in which the mirrors play a key role. In this area, “a green world is taking over everything and you pass to the authentic jungle.” The effect has been achieved with a vegetal roof and exotic wallpaper of the French firm Ananbo as well as a golden lattice designed by the study but elaborated by Miles & Lincoln. 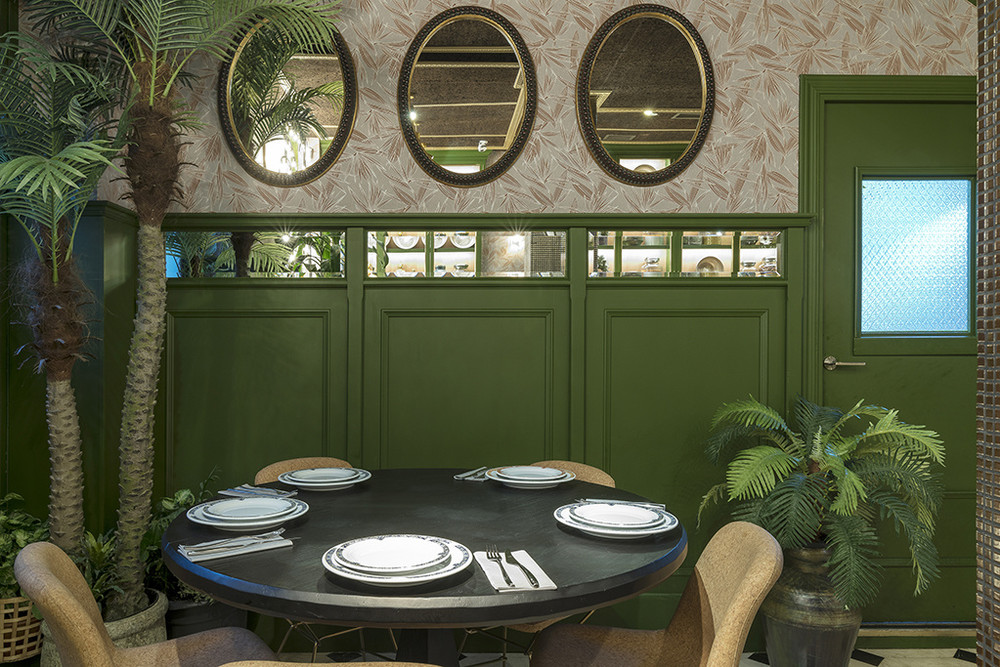 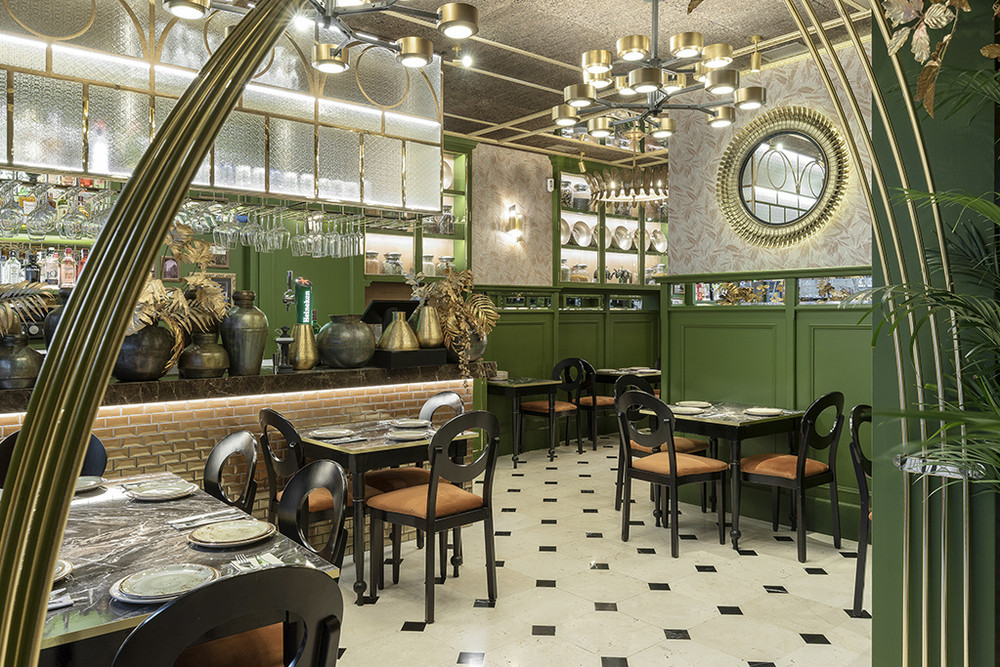 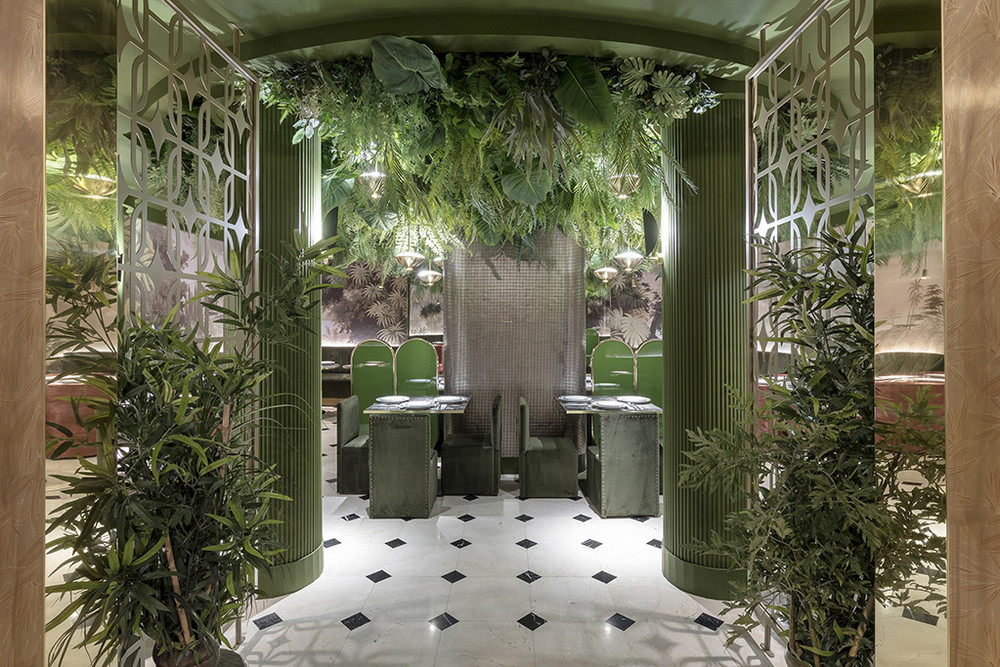 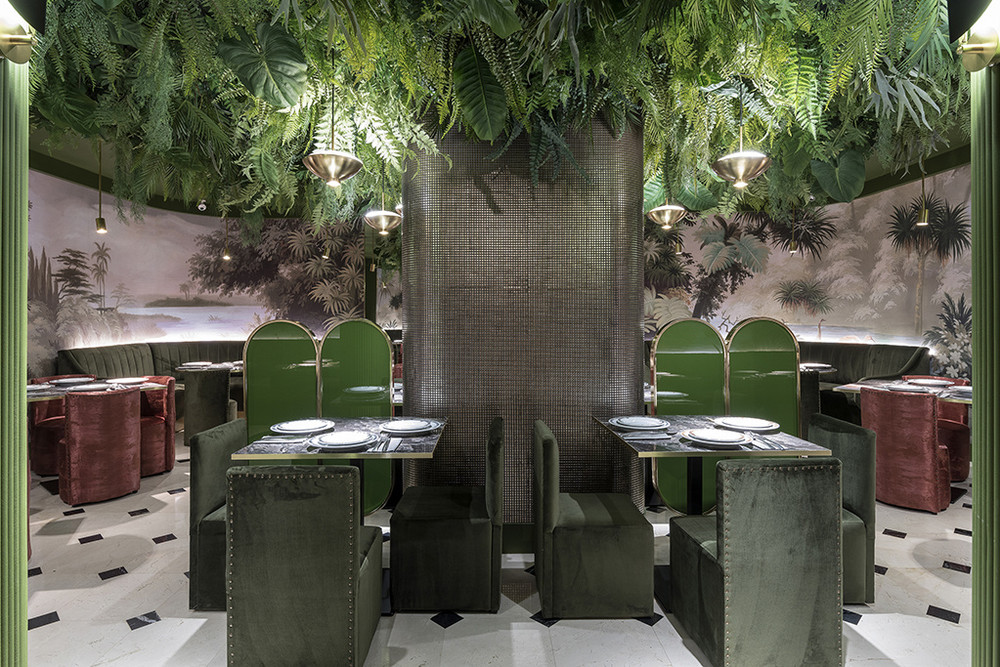 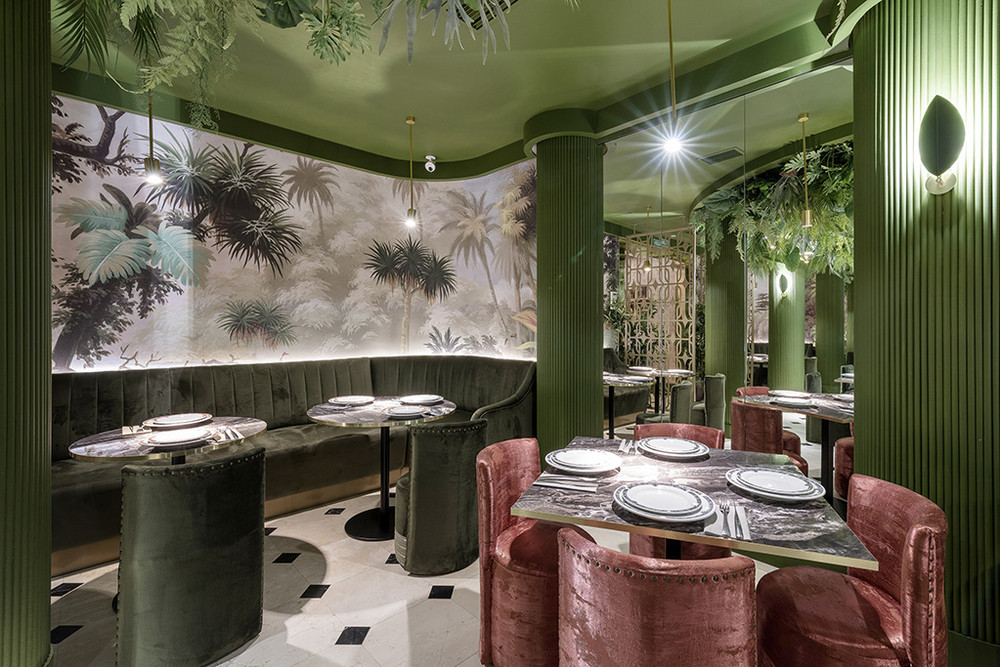 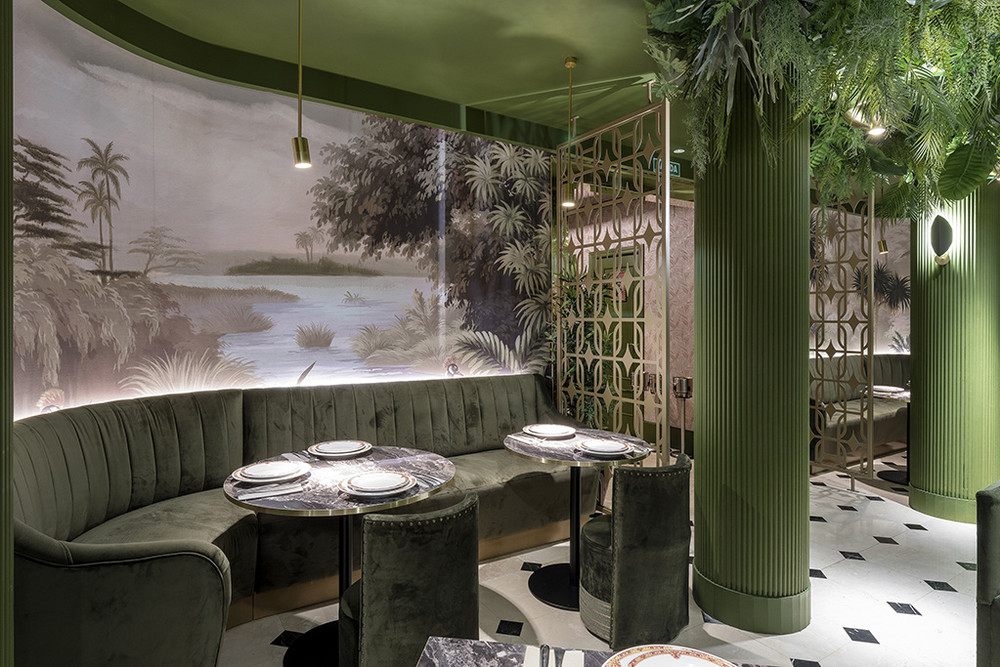 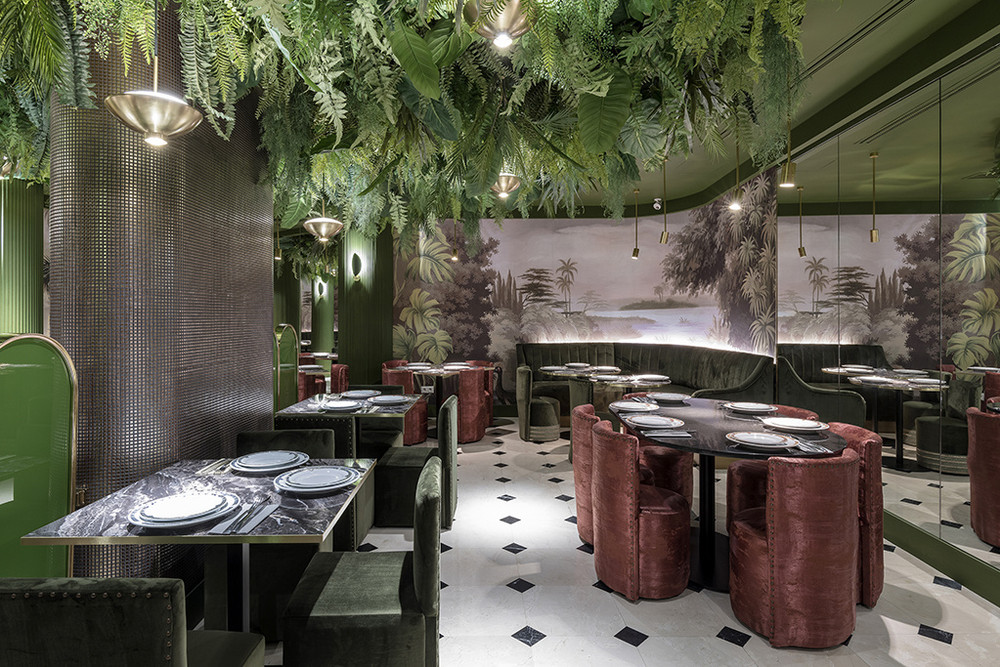 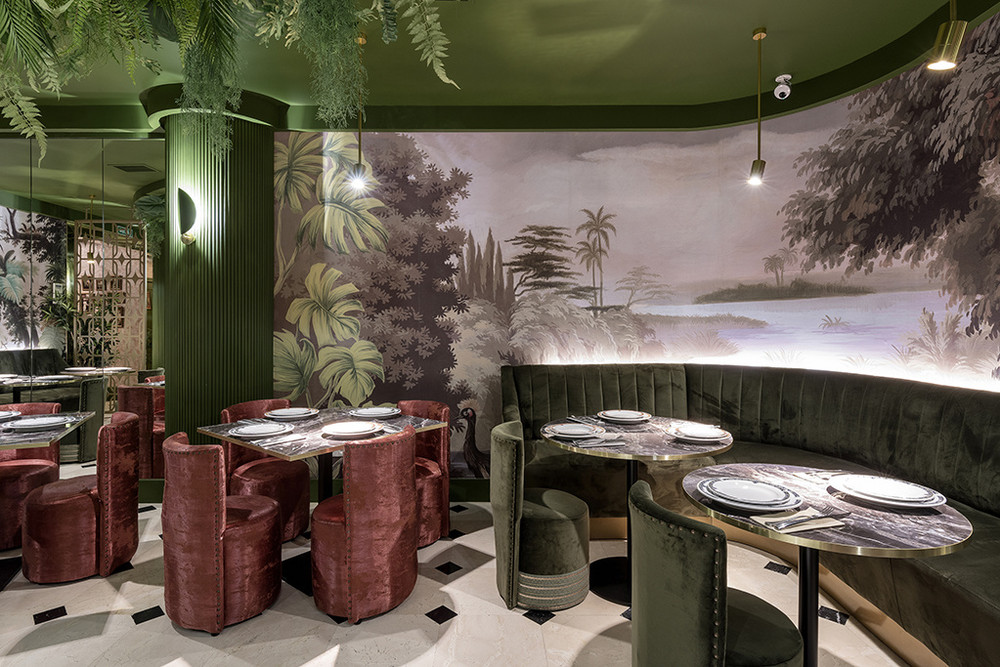 “The shape of the plant, half curved, and the mirrors, strategically placed facing each other to reflect everything, help to create that feeling that surrounds you”, they point out. The rest of the ingredients that will make us feel in India? Of course, its menu, renewed on the occasion of its new interior design and in which there is no shortage of classic dishes such as tandooris and Indian delicatessen such as Bonda Pakora potatoes.