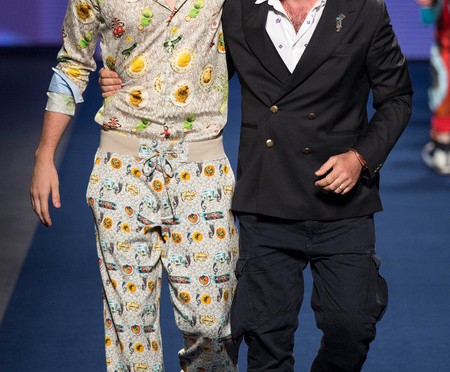 Etro being something of a philosopher, there was the obvious subtext that you are what you eat. So if you wear what you eat, you’re punching the point home even harder. The prints of pasta and shellfish were a trifle indigestible, especially when combined with Etro’s swirling paisleys writ large, but the culture around enjoying food in the summer translated much more successfully into clothing. Blue- and red-checked tablecloths, for instance, were a cliché splendidly transmogrified into suits by the tailors Etro acknowledged so movingly on last season’s catwalk. Gelato colors were celebrated in an uplifting sequence of separates. And you could say that the new emphasis on athleticwear was all about working off the last meal, as much as the generously cut double-breasted jackets and trousers would gracefully conceal any excess avoirdupois.

A musical note: The live soundtrack was supplied by Hang Massive, an English duo encountered on the street in Goa by Kean and his wife, Constanza. They play hang drums, with a sound like a softer, sweeter steel drum and they’re worth YouTubing. An Etro show is always an education on some level.  Source: style.com

It was good to see this transition, from executive city man to bohemian traveler in the same carpet.  Below the complete ETRO MEN SPRING 2015 RTW – Runway