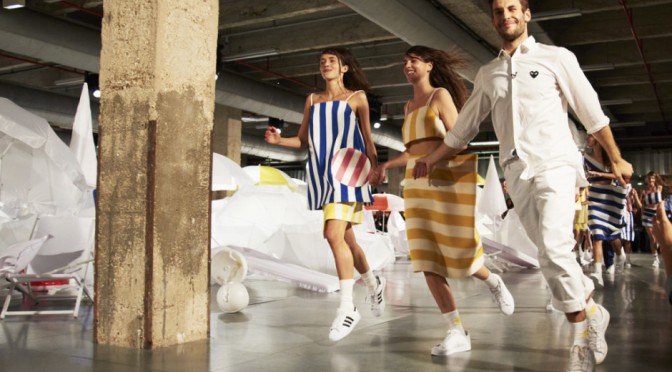 JACQUEMUS S/S 2015 RTW – PARIS: “Les Parasols de Marseille” is the name of the runway offered by designer Simon Porte Jacquemus in Paris Fashion Week.  The catwalk was all beach and sun, as good as we love it.  The runway was decorated with deck chairs, inflatable furniture, sun umbrellas and garish color combos.

It is a very beach and nautical style.  The color stripes gives the clothes that nautical felling the designer wanted to express.

Her cheeks were rosy, limbs tinged with the bare nuance of sunburn, and that natty schoolgirl combo appeared pulled-on after a romp in the surf. Followed by a suite of trompe l’oeil renditions in candy pink, sunny yellow, and electric blue, it epitomized some of Jacquemus’s lightest, most clever work to date—as each new version came spliced with a bikini or halter top, tied to unpeel from shoulders or midriff, paired with scrunched poplin trousers or a wrapped, stripy skirt.

Just as that beach theme felt set in stone, shirt cuffs stiffened and white smock dresses evolved into navy grocers’ aprons as the designer’s ode to his family profession (selling fruit and veggies) progressed into button-down shirts emblazoned with naive carrot, daisy, and clam patches. Those flat-packed looks were cute and wearable but lacked the all-out indulgence that Jacquemus unleashed mid-show. With a game-changing second half, the designer returned to the sculpted, linear experiments of seasons past, but this time cut out of his first-ever custom fabric: a 3-D knit that gave ample volume to the spongy, lustrous jigsaw dresses, extended bandeaus, and miniskirts that seemed to spill over the sides. Look 17 looked like a giant bikini bottom worn off the shoulder, and its model smiled knowingly. She smiled—as much of the audience did—because she was part of an inclusive and unpretentious fashion moment filled with collective memory and fun. Designers are often deeply concerned with things—with their life’s work, with the tugging, romantic pursuits of art and exploration, of taking us on exotic journeys. Jacquemus clearly loves life, loves being French, and is proving, season by season, how much he loves to tell us all about it. And it is infectious.  Source: vogue.com