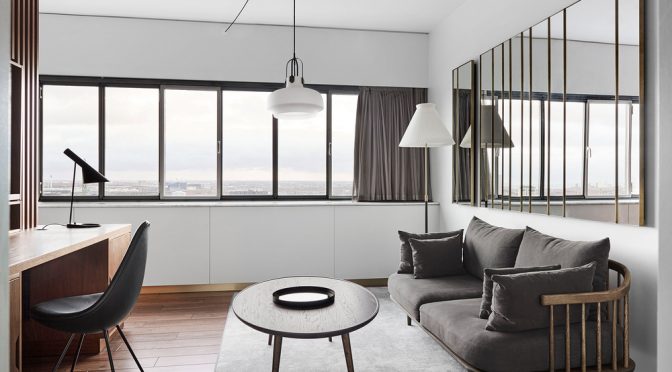 Iconic timeless and very original. The former SAS Royal Hotel changed its name but not its essence thanks to the redesign of its interiors by the hand of Space Copenhagen. A very modern classic. 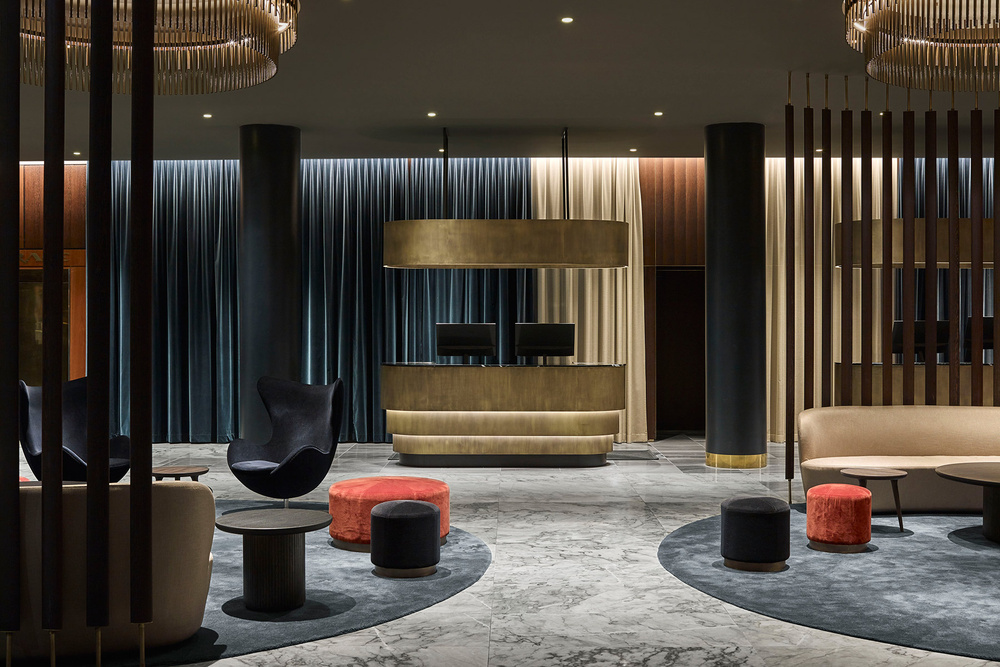 The first Danish skyscraper was the most modern hotel in Scandinavia in the 60s. Pioneer in taking everything in its category, the SAS Royal Hotel was the first design hotel in the world and also the first to swell the list of the (now) international group Rezidor Today it is renewed on the same stage and opened to the world thanks to the harmony of Space Copenhagen, probably the most functional Scandinavian design studio in the world.

“I have admired the work of Arne Jacobsen since he was a child,” Signe Bindslev Henriksen begins, half of the duo behind the Danish design firm Space Copenhagen, architect of the SAS Royal Hotel renovation. Jacobsen, architect of the first design hotel in the world, is a reference in the sector not only for its architectural relevance in the Danish capital, but also for having shaped some of the most iconic furniture of the time between the 50s and 60s, within the so-called ‘Architectural Functionalism’ – something for which many consider his authorship of a “remarkable contribution to modernism”, placing Scandinavia back on the international design map. 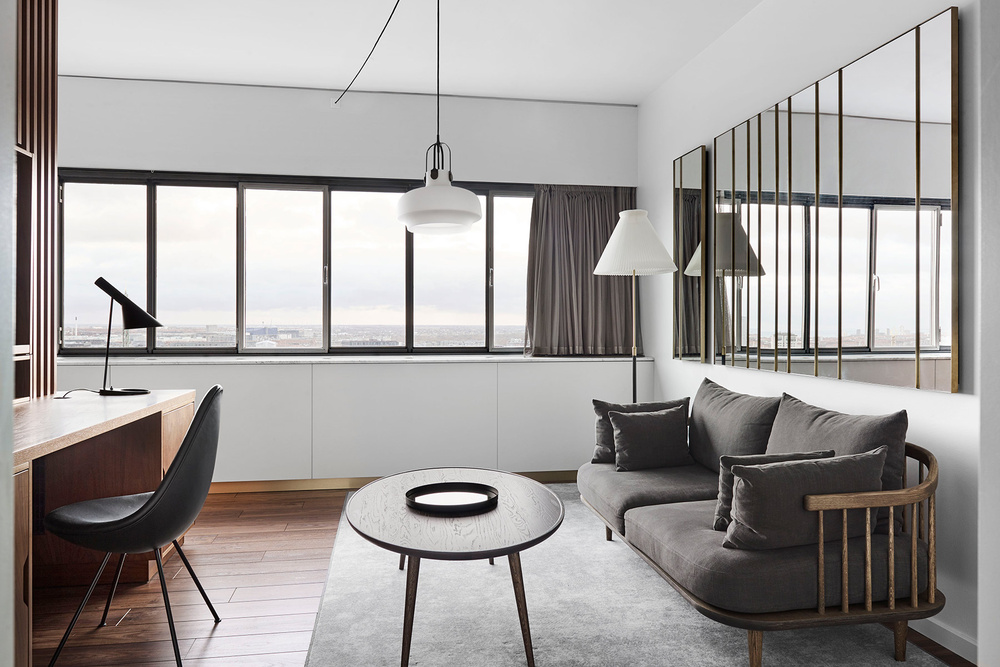 Curiously, he never called himself a designer, knowing that his duties were closer to those of an artisan who tried to fulfill the function that had been entrusted to him. Known for its works of modernists on the Danish coast, which include features such as the rescue towers of Bellevue Beach, the Skovshoved gas station in the north of the country or the city hall of the city of Ärhus, the marked modernist and anti-monumental style of Jacobsen provoked criticism and praise. After his exile during World War II, he began accepting residential commissions – some, like the houses of Søholm, served as his personal residence – and in 1956, he agreed to design the building that is now reopened under the name Radisson Royal Blu Hotel.

Despite the nomenclature, which only retains an original element, its essence has changed less than what can be expected. “We spent a lot of time researching the original files and visiting the pieces stored in the basement of the hotel because we wanted to make sure that our designs respected the memory of the original design and the vision of Jaconsen”, explain from Space Copenhagen. “The main challenge was to carry out the renovation meeting the expected dates and allowing the hotel to work in the meantime.” Over time and the change of needs in the travelers of the 60s to the present as starting points, the study felt the need to rescue, renew and (if not possible) imitate some of the most remarkable features of the original design the hotel. “We focus on the quality, the refined details and the general avant-garde air that surrounds the entire hotel,” the architects commented. “In the same way that we have added new pieces to interior design, we have rescued and treated others from the original design,” they added. The marble floor, one of the elements of the previous design that was found in the basement of the building, is an example. Another is the iconic Jacobsen chairs, with the Swan and Egg models back at the hotel. “We have worked together with [the Danish furniture brand] Fritz Hansen to recover these pieces, which were designed specifically for the space of the now Royal Blue,” they explain.

Following this premise, Space Copenhagen has been commissioned to create unpublished pieces such as the chair Loafer -located in the lobby- or the Amore mirrors for each of the rooms. “In the case of Loafer, we needed a simple, comfortable and modern chair, but above all it would give off warmth, softness and intimacy in a more public and open space of the hotel,” they explain. For the Amore series, inspiration came directly from the facade. “We were fascinated by the play of light between inside and outside, as well as how the reflection changes depending on where you look from”, they comment. “It’s something we wanted to translate to the shape and different sizes of the mirrors.” Along with the light, the view of the rooms is the star of each room, which is enhanced through a sumptuous sill in ivory-colored marble with a one-piece structure. “The intention is that the guests are based on the views and the general atmosphere; that’s why the Amore mirrors stretch in a certain way the view that the room already provides. ” 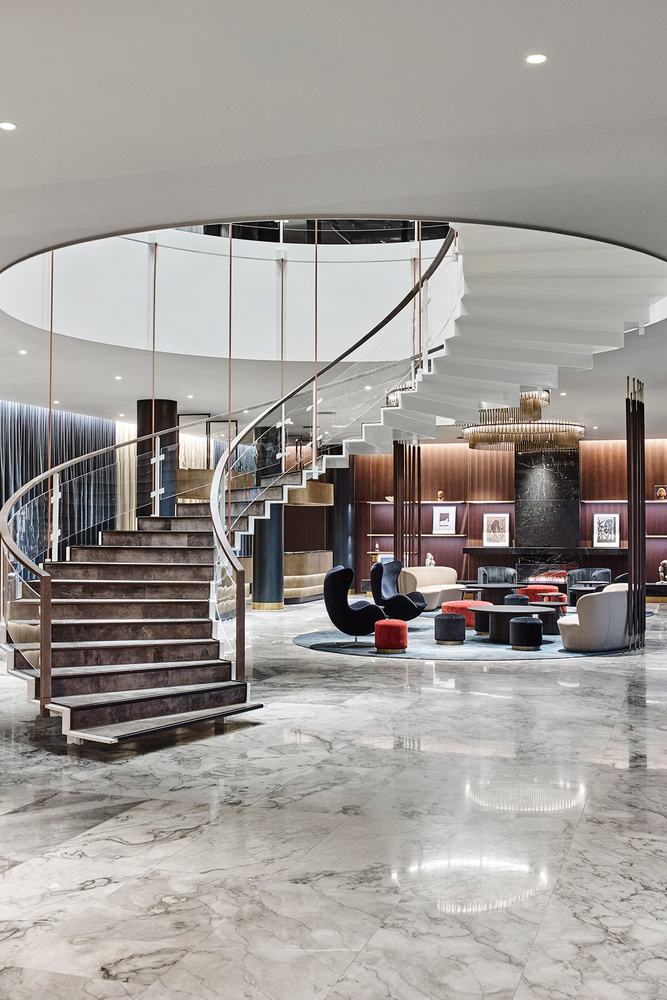 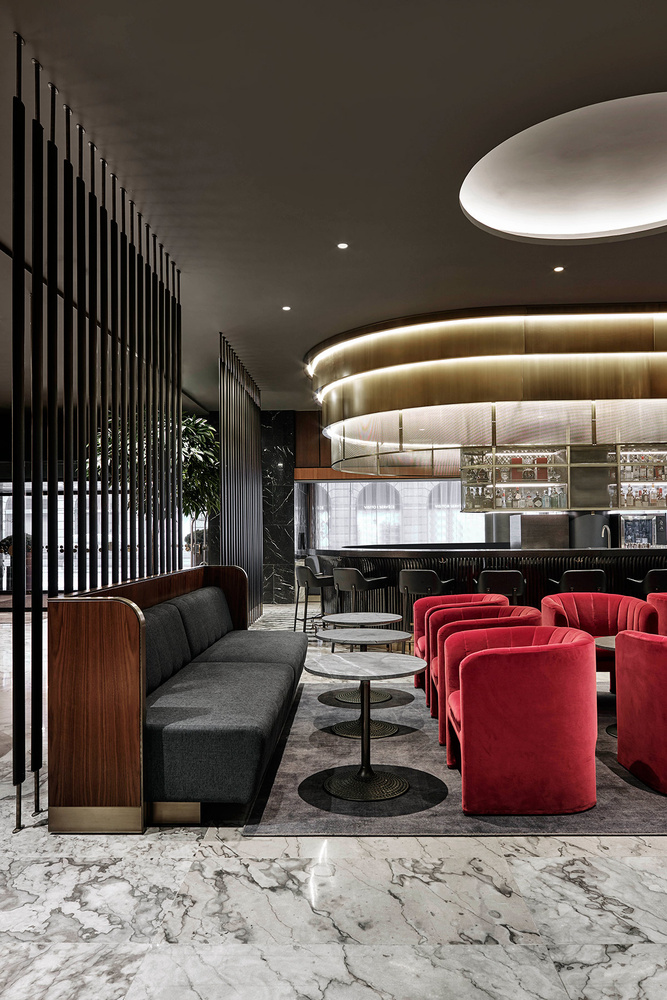 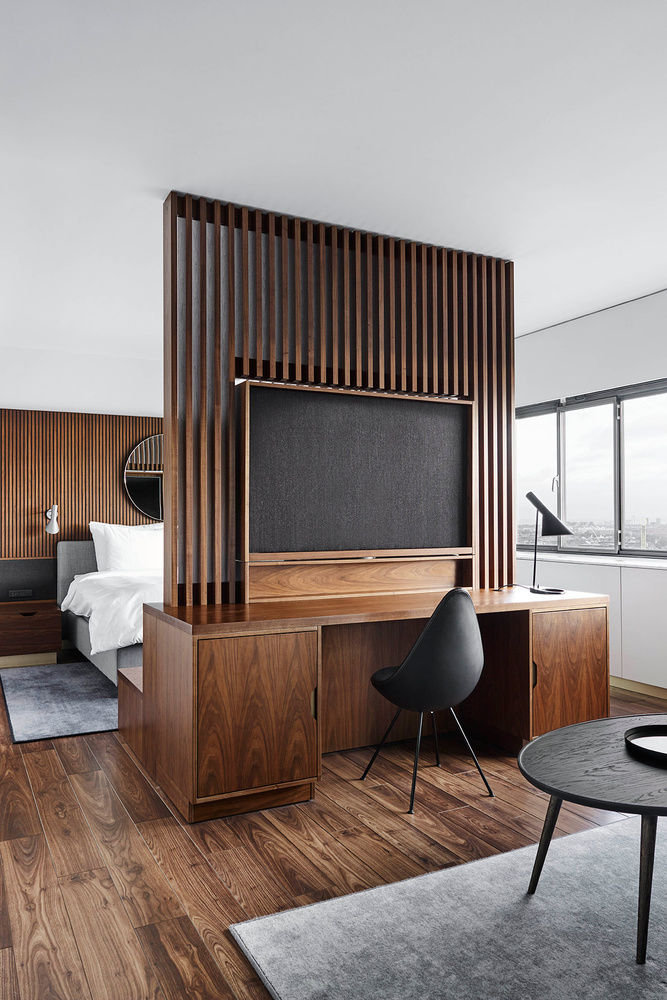 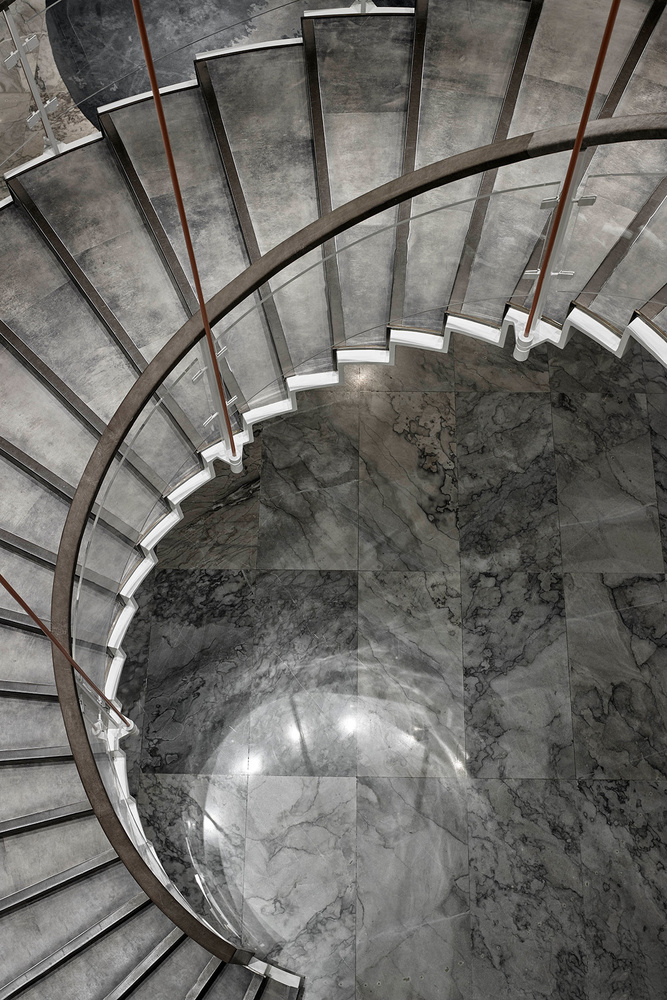 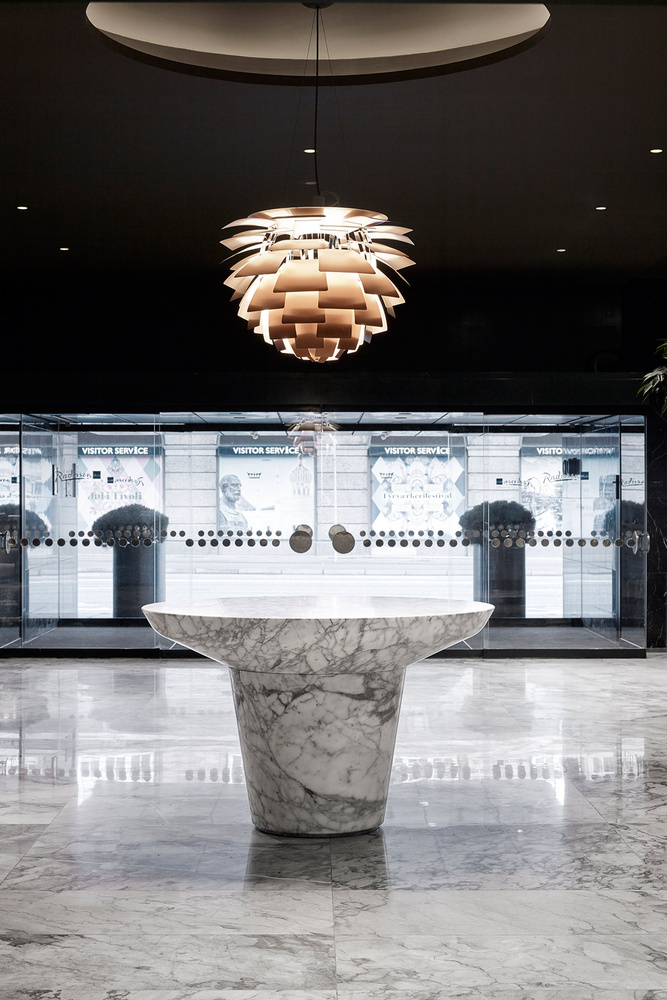 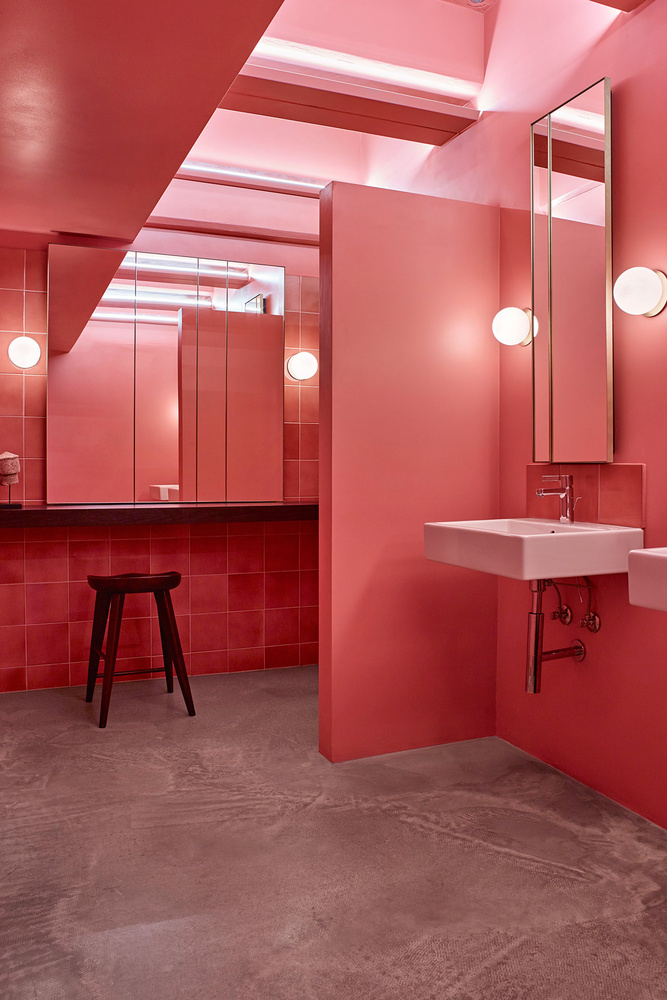 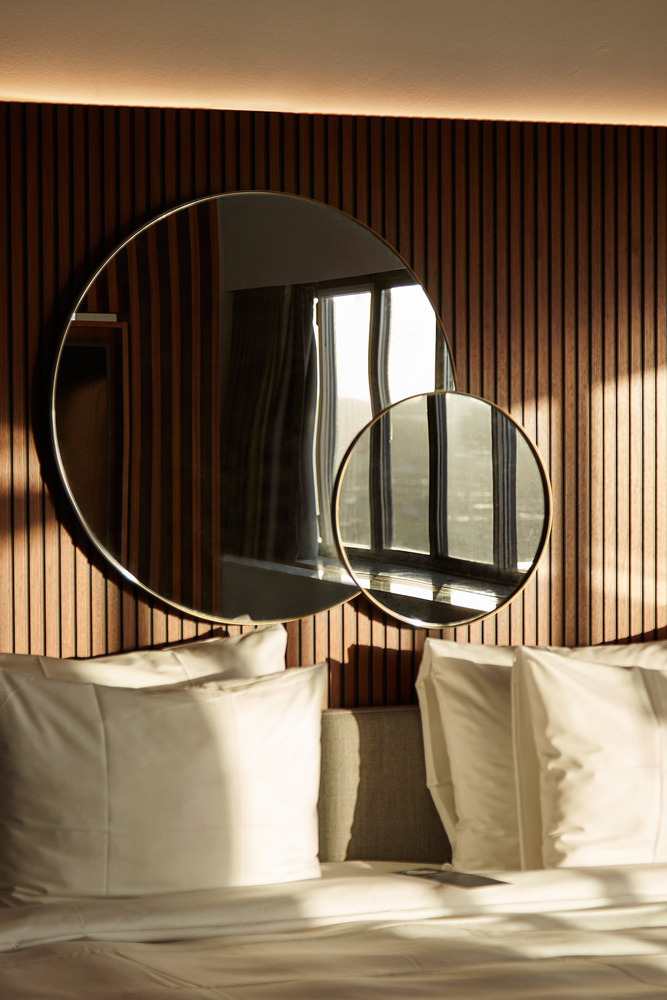 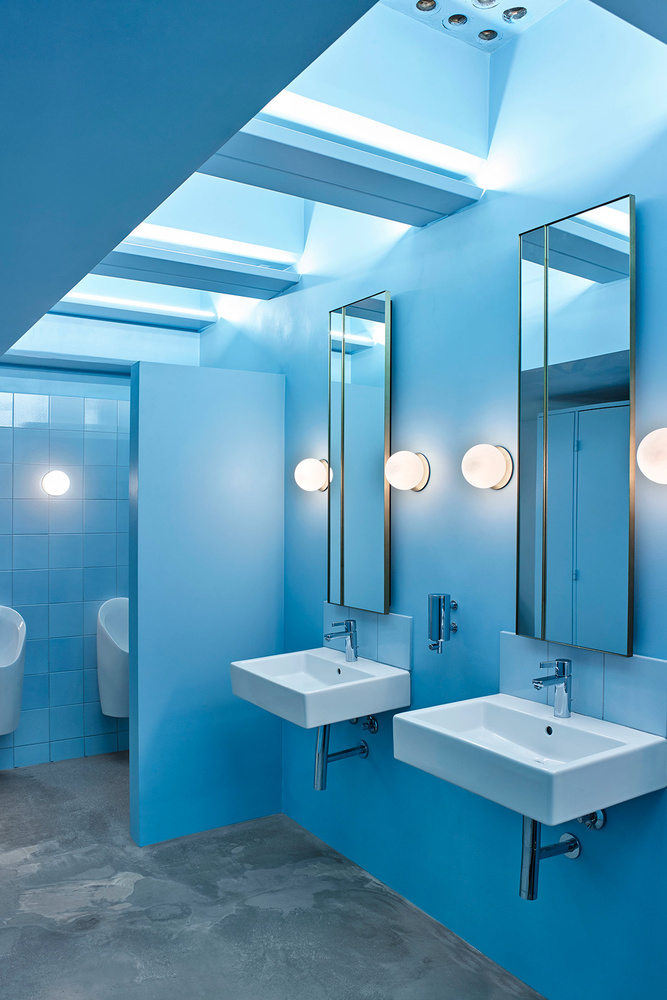 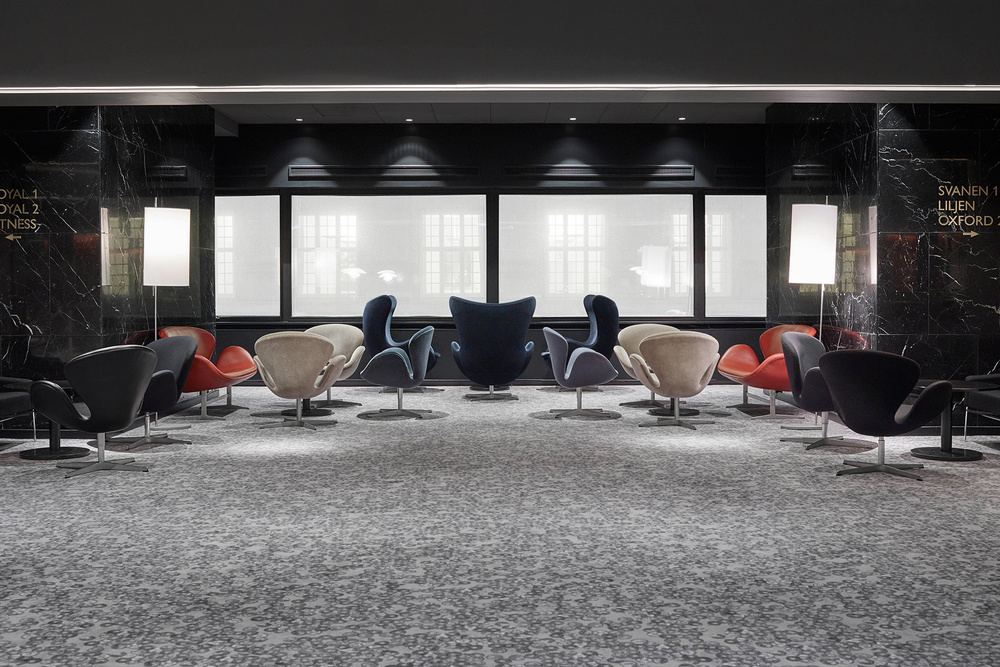 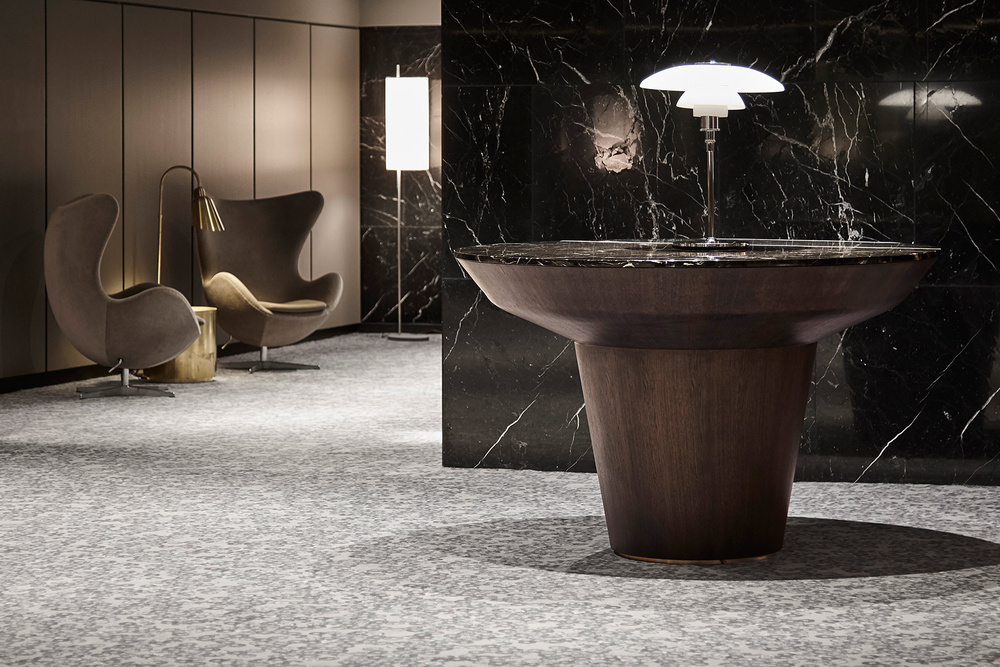 The third element of new incorporation is the color palette, to match the new definition of modernity that the hotel breathes. “The main distinctive element that we wanted the hotel to have were the materials used: the cream marble, the honey tone of the paneling, the shine of the brass … All these colors come from the original building and, although the overall look has varied slightly , we wanted to respect the accents of color with what I already had to get a nice and bright result “, say from Space Copenhagen.

Public spaces have been reduced sobriety thanks to textiles in harmony with the original elements, such as those of Sunniva -a piece that arises from the collaboration between the designer Raf Simons and Kyadrat-, which mixes textures and colors in an apparently uniform but that reveals its true intricate identity once seen in the foreground. “Our basic vision of furniture for this project was to create an exclusive environment, through textures and rich colors, but always respecting the element almost close to the domesticity that guests need,” they explain. “This is crucial because we want the guests to be able to work and relax outside of the rooms, so we have reduced the furniture’s sobriety in favor of a more contemporary and warm design, especially to surround the wood and the Marquina black marble of the bar . ”

All this is crowned with the majestic staircase that is suspended from the air in the main lobby, today headed by a glass that increases its grandeur and illuminates it as if it were a focus. “It’s strange how circularity is intrinsic to this building, from the curved staircase that surrounds the dominant column or the lights that decorate the meeting room.” What is clear is that 58 years after its opening, the Radisson Royal Blue Hotel still monopolizes all eyes.