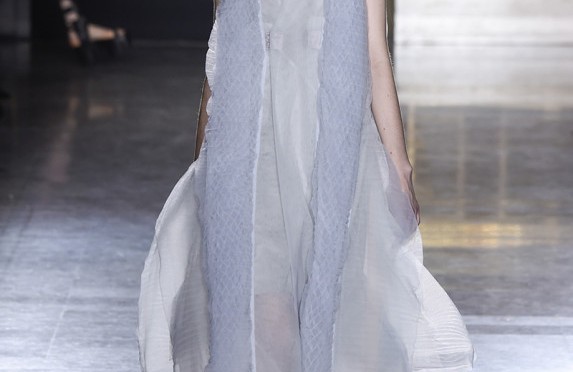 PARIS – This Rick Owens collection was Geisha meets street sweeper, street sweeper meets summer rain coats.  Lucky for him the last pieces and the shoes save the collection.

I have to say we didn’t understand it that much but definitely there are some pieces you could wear and mix with other clothes you could have.  The shoes reflect that geisha felling that is not in trend but he is pushing to.

He is an experimental designer and we have to respect his point of view……and we are respecting that.

The last three pieces are very theatrical and beautiful!

Rick Owens continues to push the envelope of fashion design with his earnest sense of curiosity, as a designer whose references (frequently classical) never cease to transform and transcend. His trajectory wavers little to trends, but a lot to personal challenge and experimentation, and today’s spring outing was a creative triumph. His show titles are cryptic yet telling, and this one, Faun, gelled seamlessly with the study in tulle we saw today, and a collection that marked one of Owens’s greatest departures from darkness thus far.

Although hardly soft and fuzzy, Faun frothed at the edges in a turbo-charged, rocket silhouette, careering down the body in controlled columns of smocked and pleated tulle. Strapless gowns, rompers, and tunics exploded knee-length into a fan of wings and fins, as models balanced on vertiginously serrated, ribbon-tied geta shoes. In Owens’s mind, these were Nijinsky’s nymphs in L’après-midi d’un faune, their ballet tutus reborn as streamlined battle garb in the mottled, mustard shades of a Léon Bakst painting shot with pearl gray and icy blue.  Source: vogue.com