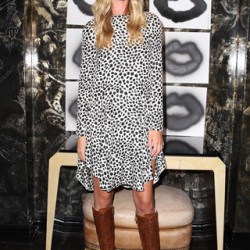 Sky Ferreira wore a long, Mickey Mouse-printed T-shirt for her performance at the Surf Lodge in Montauk.

Neon yellow shook up a skirtsuit, at the Milan menswear shows.

Emma Stone turned up at the opening ceremony in a diaphanous Valentino Fall Couture gown.

At the menswear shows, we noticed plenty of oxfords and loafers. Here, a pair of gentlemen chose matching footwear.

We’ve seen a lot of color lately, but love it when the shoes do the talking. Spotted in Stockholm: Kanye West’s Red October sneaker.

Taking a cue from the boys in practical yet stylish sneakers.