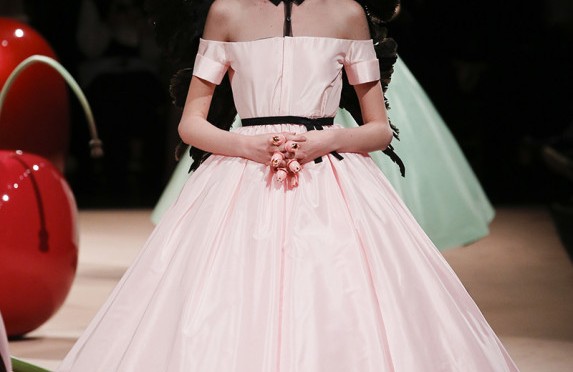 PARIS – This Undercover show was the 50’s, the Black Swan, the Forest, Rocky Horror and all that with wings and S&M leather.  The clother ARE BEAUTIFUL and you can combine them very easily.

It really is a fairy tale from a dream we are investigating about.  But we all now fashion is a dream about something that is happening outside, let’s find out in this one.

I am sure Game of Thrones was a big influence in this dream!

Jun Takahashi’s Undercover was another ostensibly romantic trip about innocence and loveliness which headed off into poignant territory. As it filtered into the show-space, the audience was faced with a set filled with giant models of cherries and the sounds of woodland birds chirping in the background. The narrative opened with bright, full-skirted fifties prom dresses, angel wings, and feathered Alice bands, followed by girlish baby-doll-lingerie pajamas, their little flat slipper-shoes decorated with cute cherries—something indicating a prepubescent dream-state, maybe? Sure enough, dawning self-consciousness, technology, and the girl-specific pressures of the outside world were soon having their influence over the playful desire to wear ballerina tutus. Before long, there were raincoats implanted with cameo-inserts playing videos and handbags with screens. Jackets came with one cuff with a cutout window in the shape of an apple—presumably all the better to accommodate the imminent arrival of the Apple Watch? And soon, there were smashed mirrors, worn as brooches and made into tiaras. Takahashi isn’t a moralizer. As the father of a daughter, perhaps he’s more sensitized than most to what it’s like for girls who are growing up today.

His show tracked the inevitable path from innocence to sexual awakening and the fractured painfulness of adolescence in the modern world—Hieronymus Bosch print dresses, and all. It ended with a finale of black dresses; his little girl all grown up into a dark world.