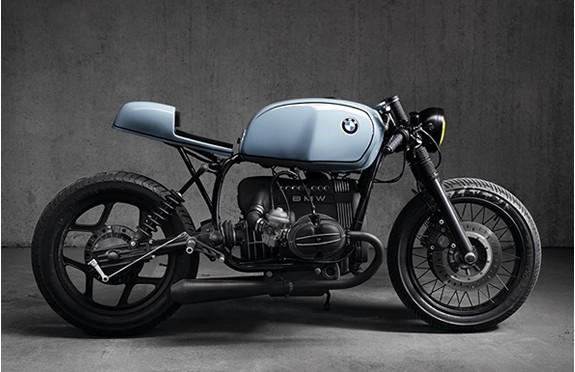 Our latest custom motorbike workshop discovery comes from Munich, Germany. Diamond Atelier was founded this summer by Tom Konecny and Pablo Steigleder, two cafe racer enthusiasts that wanted more than what is offered by the existing monotonous and repetitive custom scene. Their first build is this beautiful 1992 BMW R80RT conversion, a bike striped to its bare essentials, cleaned up, painted with a beautiful pale blue color scheme, and converted into a true masterpiece.

Diamond Atelier is the new company of 21-year-old Tom Konecny, and 24-year-old Pablo Steigleder. “We’re not building bikes to become rich and famous,” says Tom, “but to add something to the custom scene. “We’ve never raced around a track, but we know what looks good. And that’s what we’re trying to achieve.”

Believe it or not, this 1992 R80 RT is Tom and Pablo’s first build. Tom has owned the bike since he was 17, and felt it was time for an overhaul.

Hardly anything from the original R80 remains. The 18” spoked front wheel and floating brake discs are from an R100R; they’re now hooked up to a Brembo PSC-16 brake master cylinder and Brembo calipers, via stainless steel hoses.

The forks have been lowered three inches to improve stance, and are clamped by custom upper triples. Top-flight controls are fitted to Fehling clipon bars—including Magura levers and a Tommaselli quick-action throttle system. The headlight is a combination of Yamaha and Honda parts.

This awesome ride is currently for sale through their website, you can send the guys an email for more details.  I AM SURE YOU WON’T REGRET!