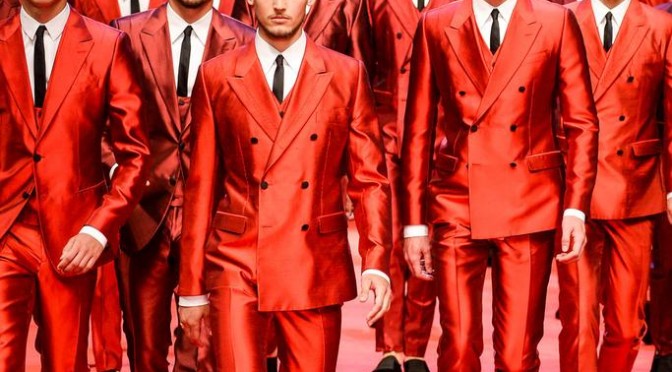 DOLCE & GABBANA MEN SPRING 2015 RTW – RUNWAY (MILAN): “The Spanish influence in Sicily Between 1516 and 1713.”  Season after season, Domenico Dolce and Stefano Gabbana have pulled Sicily to bits and ingeniously stitched it back together with love, humor, sensuality, and razor-sharp tailoring.

Dolce & Gabbana’s fantasy of the Spanish influence fed on braided brocade jackets (the braid in black, rather than the gold of a real bullfighter). You could picture the look working if it was brought down-to-earth with distressed denim. (It was; it did.) Otherwise, the tang of fancy dress was a little too sharp. The three-quarter-length pants and three-quarter-length sleeves are already familiar from Dolce & Gabbana’s recent Sicilian excursions, but here, the length was delivered in a hooded white top and matching pants, both swirling with black braid, that looked like something one of Truman Capote’s “swans” might have worn yachting round the Aegean. A seductive enough image, but rather incongruous for the circumstances.

Another mainstay of the collection was the flamenco dancer’s polka dots. You can be pretty sure that was one detail the Spanish neglected to import to Sicily, nevertheless it was actually one of the most pleasing—and potentially commercial—facets of today’s show, because it bridged the gap between the excess of bull and the rigor of the Spain we know from Goya and Velázquez and Balenciaga. There were certainly enough hyper-tailored dark suits—with white shirts, narrow ties, and a waistcoat made for the modern matador—to satisfy a contemporary need for reassuring sartorial strictness.

A footnote, literally: The unsung heroes of Dolce & Gabbana’s most recent Sicilian renaissance are whoever was responsible for the shoes. Those anonymous cobblers once again delivered creative, charming footwear. Of special note—the furry slippers and sandals. Source:style.com