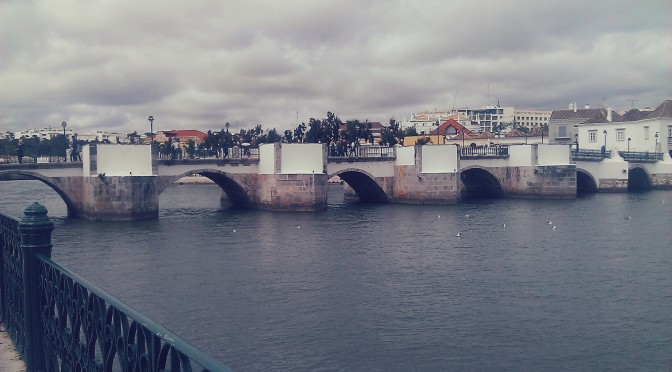 PORTUGAL’S SOUTHERN COAST, A BOHEMIAN DESTINATION: I have to admit Portugal was the big surprise for me in my Euro vacation/studies trip.  Eating near a river excellent food was an experience it never happened to me before.

We spend three (3) days in Portugal, coming from Seville, Andalucía, Spain to the southern coasts of a region called El Algarve.  Driving from Spain to Portugal and crossing the Guadiana’s river is something you have to live and see.

The food is amazing, Portugal is famous for their Codfish’s dishes and Marinara rice.  I eat the both and was delicious.

The people, the town, the architecture, the Latin flavor is something you can see as soon as you get into there.

With many of the country’s safest and loveliest beaches, and a year-round balmy climate, it is not surprising that the Algarve is Portugal’s most popular region for holiday-makers. Inevitably, this also means stretches of the coast – in particular from Faro west to Albufeira – are heavily developed, though even here the beaches are first-rate, as are the facilities. Elsewhere in the Algarve, especially around Sagres and Tavira, the surroundings are more attractive, with laidback resorts and low-key development.

To the west of Vilamoura, you’ll find the rocky outcrops and cove beaches for which the Algarve is best known, especially around the main resorts of Albufeira, Armação de Pêra and Lagos. The coast becomes progressively wilder as you head west, where attractive smaller resorts include the former fishing villages of Salema or Burgau, and the historic cape of Sagres– thought to be the site of Henry the Navigator’s naval school. The string of villages along the rougher west coast, as far as Odeceixe, are quieter still, with limited facilities but fantastic wild beaches ideal for surfing. Source: roughguides.com.