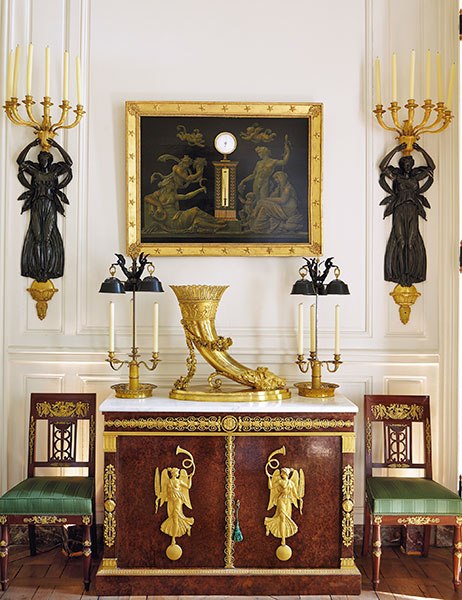 Adam Weisweiler, a master ébéniste who was a tastemaker of the Empire period, is believed to have designed this circa-1800 marble-top thuya-wood commode. It is decorated with gilt-bronze ornaments.

Hubert de Givenchy retired from the haute couture business nearly 20 years ago, but the design baron’s sophisticated taste still turns heads. On Monday, September 8, at Christie’s in Paris, he unveils “Empire,” an exhibition that salutes the swaggering neoclassical chic of the Empire Français, which ended 200 years ago. From gilded armchairs made for Empress Josephine to a ravishing vermeil soup tureen that Jean-Baptiste-Claude Odiot created for Bonaparte in-law Prince Camillo Borghese, dozens of objects from Givenchy’s and other private collections will be displayed in a gallery decorated by the couturier-connoisseur, who was inspired by period settings. “Empire” complements the Biennale des Antiquaires art and antiques fair, held at the Grand Palais from September 11 to 21.

Designed for lunch à deux, this mahogany, parcel-gilt, and ormolu tête-à-tête nécessaire was likely made for a member of the Bonaparte family, between 1798 and 1814. It is the work of Martin-Guillaume Biennais and Pierre-Benoît Lorillon and incorporates plates, wine decanters, glasses, and covered serving dishes, an arrangement that obviates the need for a servant during the meal.

Built by the cabinetmaker François-Honoré-Georges Jacob around 1804, this gilt-wood armchair is one of a quartet that will be shown. The chairs belonged to Empress Josephine and were among the furnishings of Château de Saint-Cloud.

Napoleon’s brother-in-law Prince Camillo Borghese, a Roman nobleman, once owned this vermeil (gold on silver) soup tureen, which was part of the famous Borghese service and bears the family’s coat of arms. The French silversmith Jean-Baptiste-Claude Odiot made the piece between 1809 and 1819.

Protected by decorative gilt-bronze mounts, this large Sèvres porcelain vase stands 27.5 inches tall and was made around 1805. Its first owner was the tenth duke of Hamilton, whose family sold it at Christie’s in 1882.

This pair of Empire-period gilt-bronze vases was modeled after a design by French architect Alexandre-Théodore Brongniart, who derived the shapes from ancient rhyton drinking vessels.

Winged victories of patinated bronze top these Empire bouillotte lamps, one of which belongs to Givenchy. Though the lamps are identical, one was made at the beginning of the 19th century, the other at a later date.