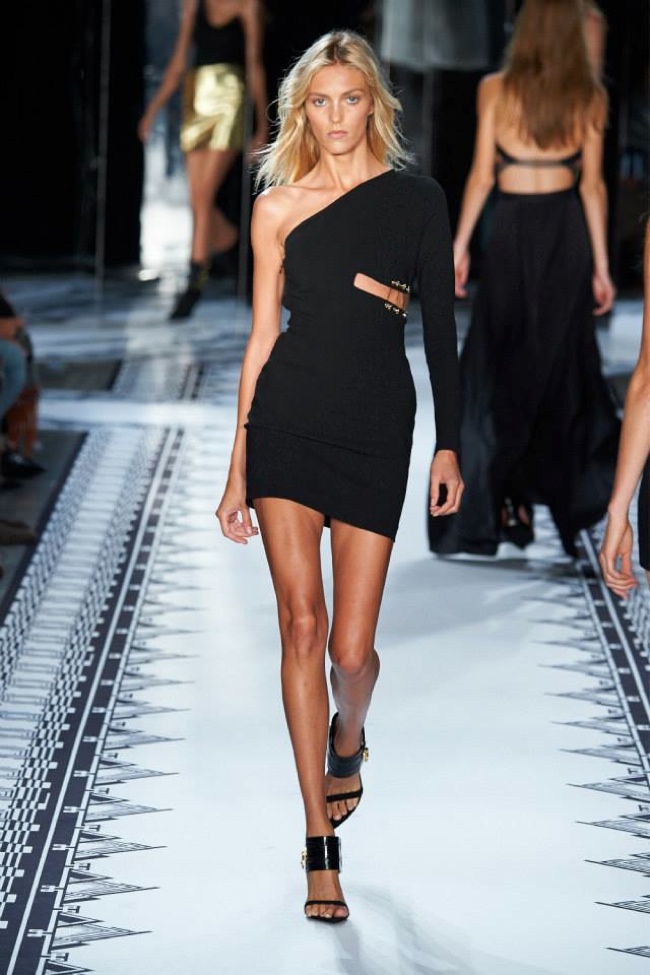 If ever there was a match made in sartorial heaven, it is the one that was unveiled on Sunday night in New York City. The kindred spirits of Donatella Versace and Anthony Vaccarello finally found each other in the designers’ first creative collaboration, which was channeled through the Italian house’s youth-driven Versus line.

Before a front row, which included high wattage guests like Nicki Minaj, Rihanna and Jennifer Hudson, the duo produced a collection that was clear a balance between the codes of the Versace house and the already identifiable DNA of Vaccarello’s signature brand. On Vaccarello’s sexy baseline of asymmetrical dresses, second skin pants, and hip high slit dresses came the addition of updated takes of Versace’s iconic safety pin closures, its Italian architectural prints and its lion’s head medallions.

In shades of black, white and gold the team offered up pieces that were often very faithful to the Versace heritage. But there were a couple of nice surprises in the mix that gave the collection a much needed push. High on that list were the ensembles that used a slim thread of metal to act like a halter neck on some seriously sexy tops and a series of asymmetrical bandeau dresses that incorporated Versace’s iconic interlinking Greek motif to great effect.

As much as the two designers’ work aesthetically dovetails on a fundamental level, they also clearly pushed each other as well.

This collection was the first time Vaccarello ever offered up his vision of what a menswear line from him might look like. He also took to prints in a major way — stepping well out of his monochrome comfort zone. As for Versace herself, well, actually she is one of the gamest designers working in the industry. As long as she sees the Versace soul burning bright in a collection, she is more than happy to let each of the young designers who have shown their work on the Versus catwalk have their moment in the spotlight.

That certainly was the case with this show. The entire collection, by the way, is already available for sale on versusversace.com website.